The recent national events have helped us take stock of where we stand and how we can do better. No one is expected to know exactly what to say, but silence does not foster healthy communities.

The CALS Office of Diversity and Inclusion hosts opportunities for the CALS community to come together and discuss racism and coping with the challenges of injustice. Click the accordions below to see thoughts and questions from participants of recent sessions.

If you have a comment, thought or experience you want to share with CALS administration to improve our community, we want to hear from you.

Mark your calendar for the upcoming CALS Community Conversations and plan to join us.

If we create a profile using our NC State email, is that profile private or public?

I am struggling with how to appropriately reflect my feelings on social media without facing reprisals. … am I allowed to reflect? Also, my program, the Ability Garden, promotes equity and inclusion, I see these as social issues, but under Best Practices and Guidelines for Social Media, we are not allowed to comment about social issues.

You have taken a right first step in seeking clarity before you act. The most hurtful and unproductive actions are typically the product of not knowing enough.

We urge all CALS community members to seek and share information, but we need to be mindful of our timing and our method. We all need to approach conversations in a way that is conducive to positive growth and sharing.

Social media can sometimes have the unfortunate effect of distorting good intentions. At times, social media posts are seen as declarations of opposing stances that the poster intends to act upon even if that stance only benefits the poster. We have to be careful to only speak on ideals the university has publicly acknowledged when using social media. It also may help to vet those statements further to ensure they are the university’s position.

Anytime we use an identifier that connects us with NC State, we are held to its policy and regulation standards. If you want to share an idea via social media that you are not sure is the same message the university promotes, check with your department leader. If you are the department leader, you can check with the CALS Communications team before you post.

As members of CALS, it is important to recognize, highlight and discuss how black farmers were pushed out of their farms at the turn of the century.

This article is a good way to start:

The topic of how Black farmers were pushed out of their farms at the turn of the century is an important one, and we conducted a program on it in our Conversations that Matter session on food insecurity. A recording of that session is available below.

It is imperative to understand the obstacles the Black community has faced and the contributions they have made to agriculture and life sciences. As such, we thought it would be beneficial to speak on this topic in one of our town hall meetings.

When members of our CALS community let our CALS Office of Diversity and Inclusion know of their interests in specific topics of discussion, we make every effort to distribute information about the topic. We’ve typically done this through the Conversations that Matter sessions, through our website and by hosting special luncheons if there is broad interest. We encourage the entire CALS community to continue to submit suggestions; they are a tremendous help to our planning relevant programming.

How can someone who has never experienced systematic injustice develop a better understanding of the struggles faced by colleagues and neighbors?

It’s difficult to talk about, but if you are white and feel uncomfortable acknowledging how you benefit from racist systems, think about how much more uncomfortable it is to be afraid for your life every time you leave the house.

Partner with our CALS Office of Diversity and Inclusion. Attend multiple events (consistency is key). Work to create opportunities for all people to converse and be informed and challenged about race, gender, intersectionality and police brutality. Become a part of the support system by helping plan and advertise programs.

Organize group talks on race, social injustice and the role privilege plays in the fight for racial justice. Creating spaces for non-black people to share perspectives and learn how to support the Black community is a great way to build and expand alliances.

Watch movies and documentaries, and read books and articles that highlight racial inequality and discrimination. Share your perspective with a Black friend and allow them to share their view. An easy way to start the conversation is to say, “Hey, I want to learn more about racial inequality against the Black community and was encouraged to watch these programs and read these books and articles. Would you be interested and comfortable having a conversation with me about it?”

The process requires showing up regularly, learning and unlearning, and much self-reflection.

We all need a foundation of knowledge and an intention to use it. You only know that knowledge is working when you apply it to something happening in the real world.

How can I provide support while quarantining?

There needs to be a more diverse group of advisors…

As a minority, I have never felt like I belonged in CALS..but I’ve stayed due to my ambition…to one day be a Veterinarian.

Your comment highlights a need for CALS ODI and CALS leadership to convey that we are a college where marginalized communities are welcome to study and contribute to addressing global challenges. CALS ODI will work closely with CALS advisors.

Hearing the urgent call for action-based solutions, we will continue to enhance our student programs, including the Diversity Ambassador program and the First Generation program. Our goal is to form networks and create spaces where CALS students from marginalized communities can gather to support one another and have the opportunity to communicate with college leadership, faculty and staff who can help students navigate their journey through NC State.

What kind of anti-racist programs and support groups are currently at NC State?

NC State University’s Office for Institutional Equity and Diversity (OIED) provides a variety of programs and resources that cultivate and support diversity, equity and inclusion.

Dr. Richard Linton, dean of CALS, Dr. John Dole, the associate dean of CALS Academic Programs and Dr. Alex Graves, director of CALS ODI, recognize that CALS needs to expand and develop diversity programming to prepare our students to be leaders in addressing global challenges. We also need to focus on developing cultural competence among our CALS community. As such, Dean Linton and Dr. Dole have pledged to provide the necessary support to ensure that our college is one where racism cannot survive.

The next step to bring CALS’ anti-racist strategies to the highest working level involves gathering input from the community via our question and comment submission form. Also, CALS leadership and CALS ODI will continue to hold town hall meetings that communicate CALS’ anti-racist platform and that racism in CALS will not be tolerated.

I would really like to be buddies up with a Black colleague(s) to begin this conversation.

Then do it! Don’t be afraid. You are welcome to come to talk to us. We invite you to have courageous conversations, and it is okay to say I don’t understand or I don’t know.  However, make sure to self educate by seeking out resources such as documentaries or articles about injustices and racism. Then listen and learn.

Why Can’t We Say All Lives Matter?

Do all lives matter? Of course, they do!

Saying that black lives matter does not mean that other lives don’t matter. Black Lives Matter is not an answer to an abstract question such as, “Which lives matter?”

Relatively speaking, “All Lives Matter” sounds like a “we ‘re-all-in-this-together” statement. Some may use the phrase to suggest that all races should join hands and stand together against racism, which is a sentiment that comes from a good place. But the dilemma is, the phrase takes the focus away from those who need it. Saying “All Lives Matter” redirects the attention away from Black lives, who are the ones in danger.

While the intention of the phrase “All Lives Matter” may be to put everyone’s life on equal footing and convey a sense of unity, responding “All Lives Matter” to “Black Lives Matter” is more divisive than unifying. That is because it discounts and diminishes the focus on the violence and discrimination Black individuals face every day in this country.

It is a natural reaction to respond to one group centering its experience with, “But what about all lives?” or “Isn’t my safety important, too?” But the truth is, Black Americans are disproportionately impacted by police violence and systematic racism in our nation. Asserting that “All Lives Matter” just reaffirms — or at best ignores — that reality. Undeniably, every life is valuable, but not everyone’s lives are in danger due to their skin color. Saying “Black Lives Matter” is not saying other lives do not, but rather that Black lives matter equally.

Regarding police brutality, if a car seat for infants was determined to be defective and unsafe, would we consider someone as anti-child or anti-car safety if they wanted that defective car seat removed from the marketplace?

We demand accountability and safety with food, with products, and with virtually every type of job – but when we demand that same accountability with police, we are pegged as hating cops. This could not be further from the truth. The men and women of our nation’s police forces are our everyday heroes.  However, when individuals from the police force abuse their authority, and consequently, lives are lost, there must be some accountability and recourse.

Again, do all lives matter? Of course, they do! Saying “Black Lives Matter” is not equivalent to saying other lives do not, but rather that black lives should matter as much as the lives of all others.

What online resources can we use to discuss racism and the reasons systemic racism occurs with non-Black people?

I am a graduate student in food science. … I don’t feel like I fit into the department. … no one looks like me leading labs or research. When there was an African-American professor…she was treated with racism to a degree where here research was sabotaged and her subordinates refused to help get her lab running. Additionally, to my knowledge, there have only been two African-American females to graduate with a Ph.D. in food science. There has never been an African-American male graduate from this department ever! It’s not because of a lack of intellect, but rather a lack of financial and emotional support. We need professors of color who relate to students, their backgrounds and culture, and the challenges they have in everyday life.

Stronger as a Pack

It is our individual and collective responsibility to fight injustice and advance a diverse, inclusive and supportive environment for everyone on our campus and beyond.

That’s what it means to be part of the Wolfpack and a part of the CALS community. Join us. 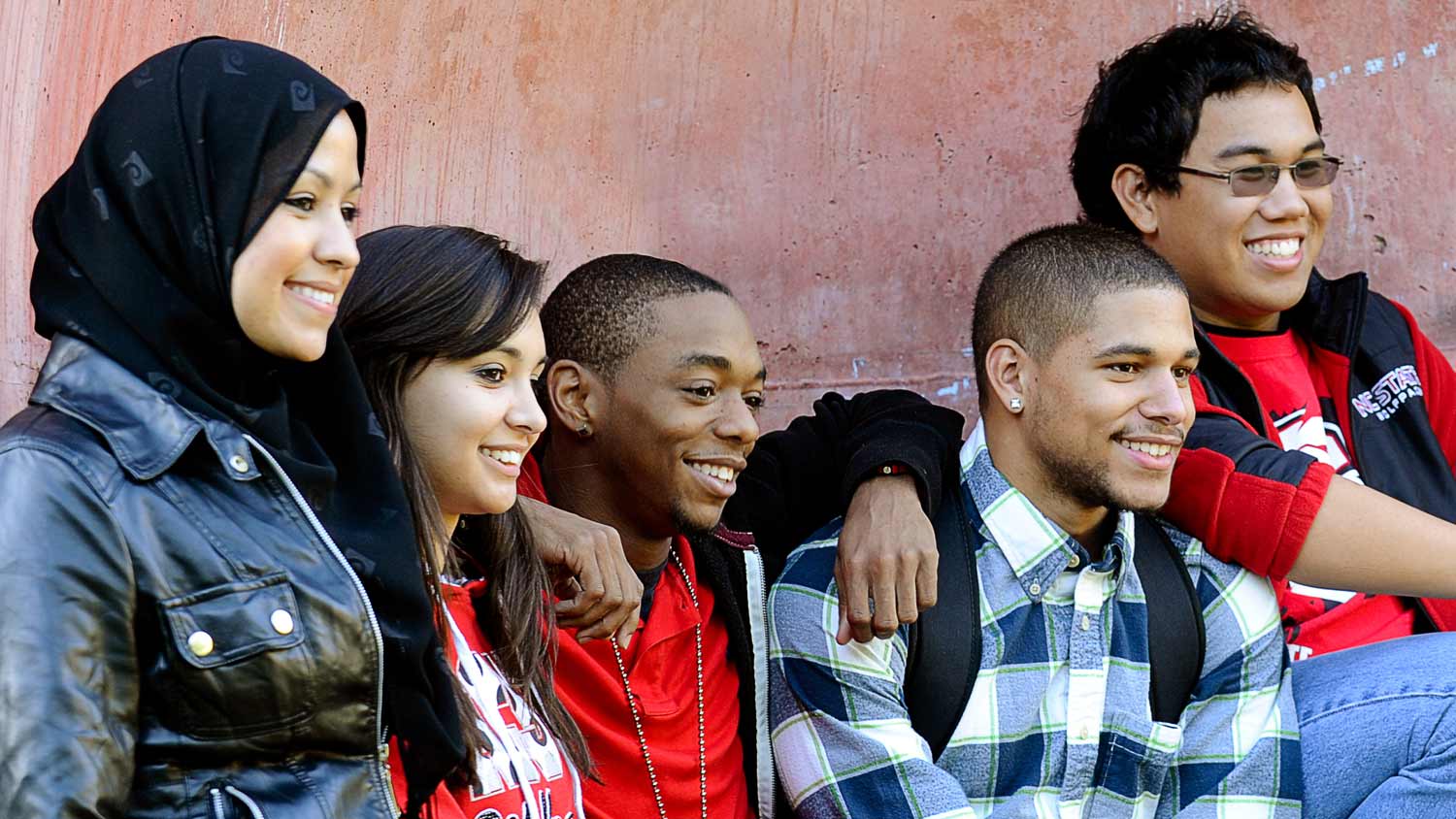