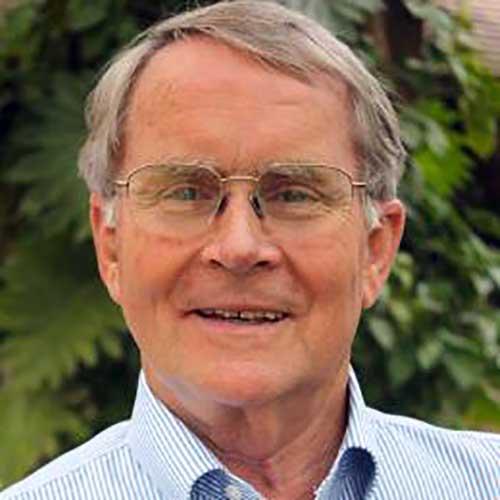 Prior to coming to NC State, Dr. Wilson worked for nine years as Research Postharvest Physiologist and Technology Transfer Specialist (bananas and other tropical fruits) for the Division of Tropical Research of United Fruit Company (Chiquita International, LLP) in La Lima, Cortes, Honduras – plus other banana divisions in Middle America – where he learned Spanish.

In 1983 he resumed his previous Horticultural Science responsibilities, plus he established the statewide Postharvest Physiology/Technology Extension program.

In 1990 Wilson was selected as the first ASHS/AAAS (American Society for Horticultural Science / American Association for the Advancement of Science) Congressional Science Fellow – where he worked at the heart of the legislative process as Senior Science Advisor/Legislative Assistant for agricultural and environmental issues in the office of North Carolina Senator Terry Sanford.

In 1991 Dean Durward Bateman reassigned Dr. Wilson to Peru for two years as Chief of Party of the NC State USAID Applied Technology Transformation (ATT) project – and transferred his position to the Office of International Programs (OIP) of the College of Agricultural and Life Sciences (CALS).

In 1992, due to unrest related to terrorism, the U.S. Embassy in Peru terminated most contract programs including our USAID ATT project and our more than 40 year-long NC State ‘Mision Carolina’.

Because there was no available position in the CALS OIP at that time …..

By 1994, because the OIP staffing situation had not changed, Wilson was reassigned to the Horticultural Science Department with new extension responsibilities including Postharvest Physiology and Technology and Greenhouse Vegetables – plus engagement as the departmental representative for the establishment of the Organic Unit of the new NC State, NC A&T State Univ., NCDA&CS Center for Environmental Farming Systems (CEFS).

In 1997 Dean Bateman appointed Wilson as Assistant Dean for International Programs for CALS.

In 2006 Wilson was selected as Senior Advisor for University Relations and Agricultural Research, Training and Outreach for the Office of Agriculture of USAID/Washington – through a two-year Intergovernmental Personnel Agreement (IPA) between NC State and USAID. During this time one of Wilson’s responsibilities was being engaged as the only non-career Foreign Service Officer on the team that drafted the RFP (Request for Proposals) for the USAID Horticulture Collaborative Research Support Program (CRSP) … which eventually became the Feed The Future Horticulture Innovation Lab.

In 2008, Dr. Wilson returned to the Horticultural Science Department – with responsibilities which included teaching graduate and undergraduate Postharvest Physiology, HS 462/562, both in the classroom and by distance learning.

In 2009 he was appointed to represent NC State on the Program Council of the USAID Horticulture CRSP, then elected to its International Advisory Board (IAB) – serving as its initial chair during 2010-2012 … and continued service on the IAB of the Horticulture Innovation Lab until its termination in 2019.

In 2012 Wilson enrolled in the NC State phased retirement program and retired in 2015.

Since 2015 Wilson has been actively engaged in the teaching, mentoring, and program development at the Panamerican School of Agriculture/Zamorano University near Tegucigalpa, Honduras

A member of ASHS since 1962, Dr. Wilson was elected Fellow of the Society in 1992, was elected President in 2003, its Centennial year, was Chair of the Board of Directors in 2004, and received the Outstanding International Horticulturist award in 2008.

Dr. Wilson’s traditional and non-traditional contributions to North Carolina State University have been diverse – while adding value to the mission of one of the leading Horticultural Science Departments in the United States.

Since 1979 George and his family have been members of Hayes Barton Baptist Church serving on its diaconate and in its chancel choir.

Since 1998 George has been a member of the Rotary Club of West Raleigh serving as its president during 2018-2019.

George was married to Claudia (Cochrane) Wilson for 52 ½ years – they have three children, five grandchildren, and two great-grandchildren.