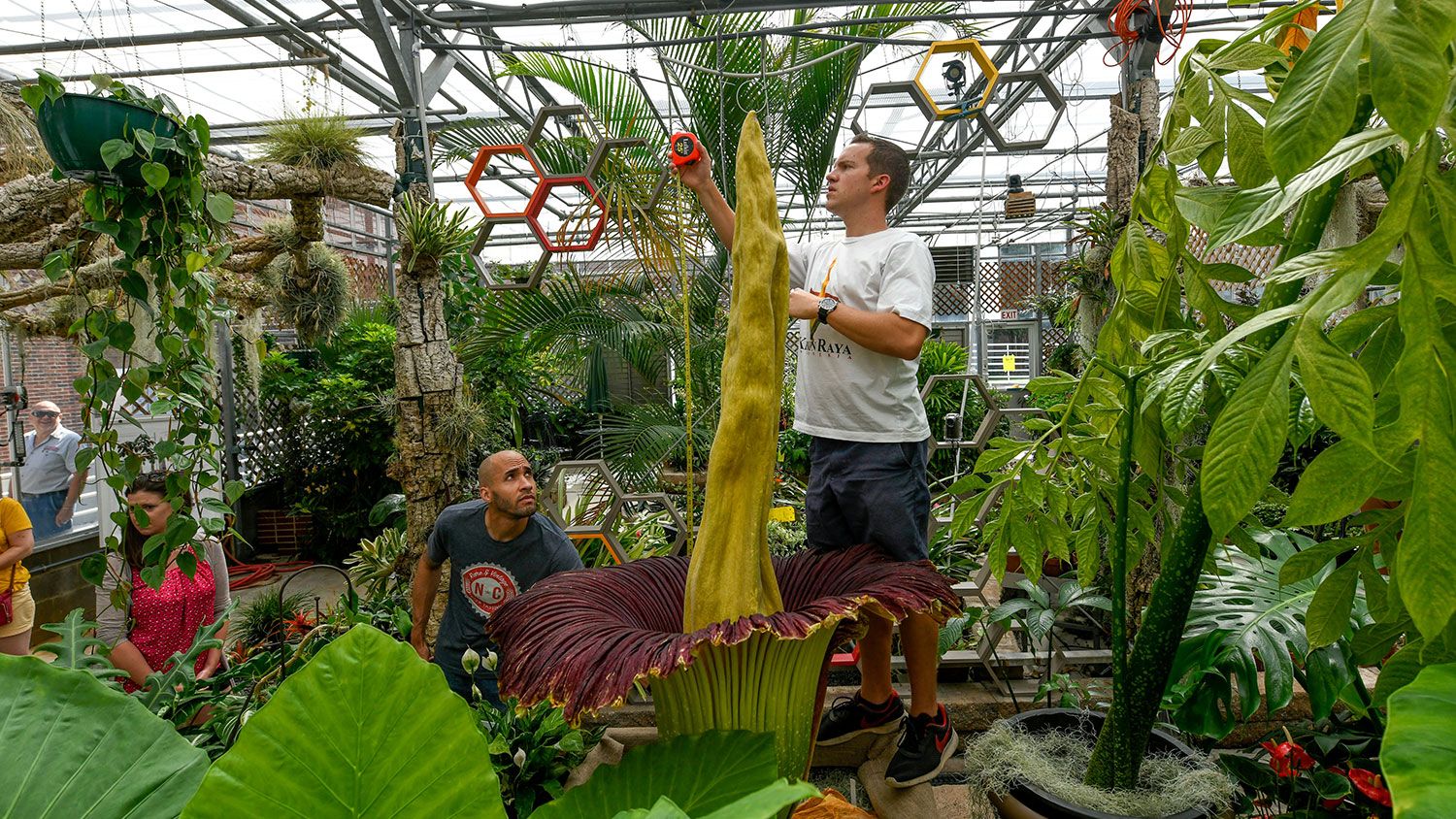 A rare plant puts on a spectacular show --- and makes a big stink.

What’s All The Stink About?

Fortunate we are! Since 2016, we’ve experienced three bloom cycles of the rare titan arum (Amorphophallus titanum). 2016, 2019 and most recently in 2021. This special plant, also known as the corpse flower, smells like rotting flesh as it blooms. On all three occasions the plant grew to be more than five feet tall and it unfolded into a magnificent flower around three feet wide.

Everything You Wanted to Know About a Corpse Flower …

Facts About Corpse Flowers and Our Own Dear Lupin

Scientists at NC State watched a tropical plant closely as it bloomed in late September 2016, sending out not just a big flower — one of the biggest in the plant kingdom — but a big stink as well.

From Beginning to Bloom

Brandon Huber, who received his Ph.D. in horticultural science in May 2021, received his titan arum 11 years ago when he was visiting the Huntington Botanical Gardens in California. Then, it was a dormant 4-year-old corm, an underground stem about the size of a softball. The corm now weighs about 60 pounds, down from its heaviest weight of 120 pounds in 2019. Huber brought the titan arum with him to NC State.

The plant’s first bloom in 2016 came amid a rash of corpse flower blooms nationwide. Only a few hundred Amorphophallus titanum blooms have occurred in cultivation in the past 132 years, when the first one bloomed in London.

Huber and Diane Mays, who curates the greenhouse conservatory where the plant is held, both said the blooms have been fascinating events for plant lovers. “I feel like I have a front row seat. To have it in our region and our greenhouse, we feel very special,” Mays says. “It’s such a spectacular plant.”

How the Plant Came by Its Name

To honor the plant’s connection to NC State, Huber has named it Lupin, after Remus Lupin, a werewolf from the Harry Potter series whose name comes from the Latin word meaning wolf. In addition to watching the livestream video on this site, you can follow the plant’s progress on Instagram and Twitter using the hashtag #Lupin2016

Huber has three titan arums growing in the NC State University’s conservatory greenhouse. Lupin (the original corpse flower that is named after the Werewolf in the Harry Potter series), Wolfgang (which may bloom for the first time as early as late 2022), and a yet-to-be named clone of Lupin.

Huber is trying to create new Amorphophallus hybrids by crossing titanum with other more hardy species. His goal: to create a hardy plant that gardeners can grow outside.

Huber has been growing plants since early childhood and as a teen won several prizes for aroid plants he entered in for the Philadelphia Flower Show. Aroids are members of the Araceae family of plants, sometimes known as the Philodendron or Arum family.

Huber has earned two degrees at NC State: a master’s and a Ph.D., both in horticultural science. His master’s research is on breeding stevia, a natural sugar substitute. His Ph.D. research focused on controlled environment horticulture, where he studied ways to optimize efficiencies of indoor growing systems through various approaches including carbon dioxide enrichment, spectral quality and air velocity. These factors make growing vegetable seedlings indoors more sustainable and economical.

In addition to working as the plant physiologist at AgEye Technologies, a biotech company exploring AI technologies in controlled environment agriculture, Huber will be a visiting lecturer at NC State, teaching a course on vegetable production in Fall 2021.

What is a titan arum, or corpse flower, and why do horticulturists care about something that smells like spoiled meat?

Because It’s a Rarity in the Plant Kingdom

Because It’s Got Some Cool Names

Because It Has a Unique Life Cycle

The titan arum typically takes 7-10 years of vegetative growth before it blooms for the first time. 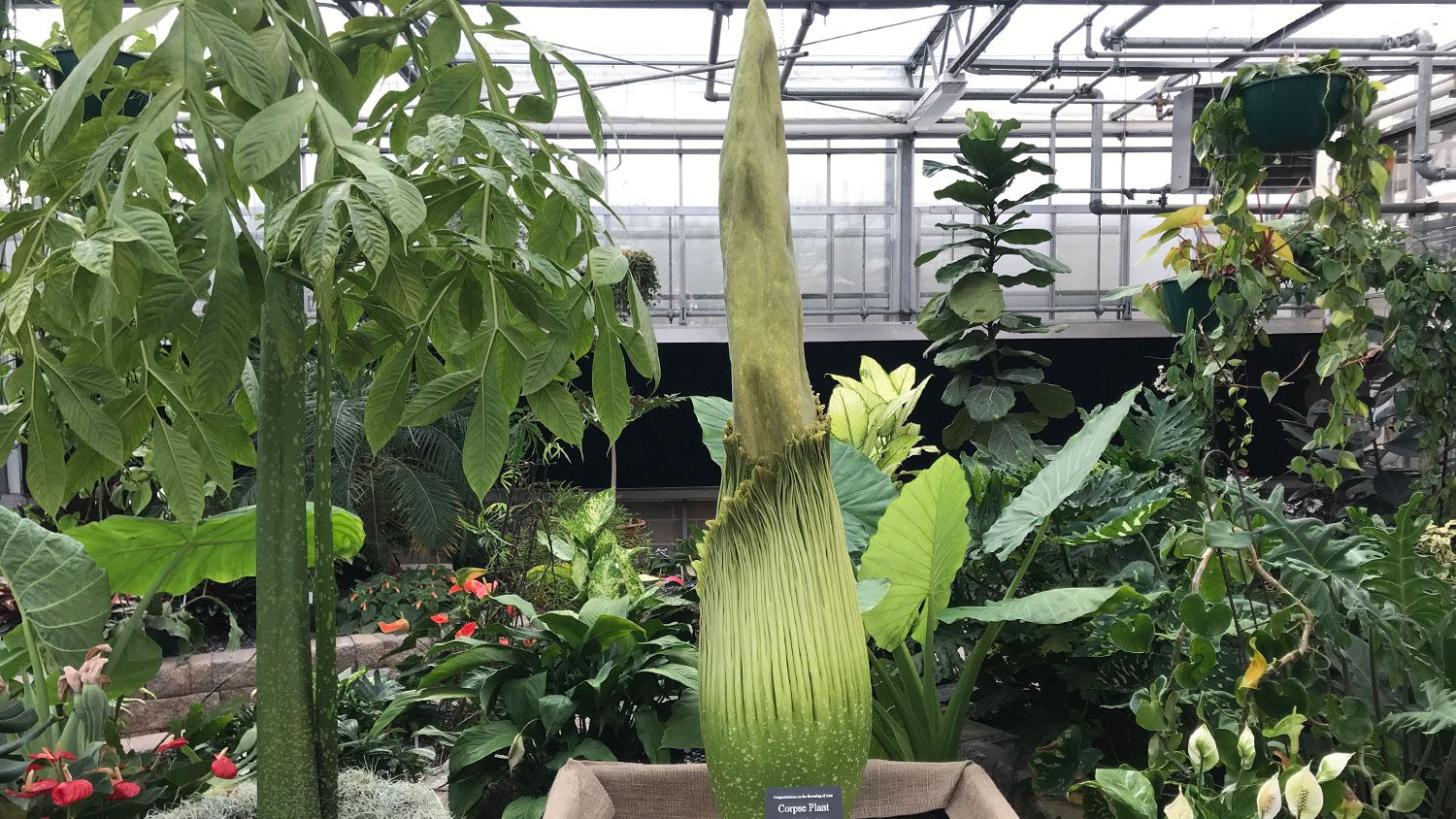 Through classroom instruction and hands-on learning in our greenhouses, field labs and community gardens, our students prepare themselves to support economic development and environmental sustainability wherever they may go!

Keep Up with the Corpse Flower

Our faculty and students conduct cutting-edge research that increases the quality and variety of fruits, vegetables and ornamental plants available to consumers worldwide. We are experts in the science, art, technology and business of growing plants. And demand for our services is growing.

People depend on plants for environmental aesthetics, food and recreation. No matter where you live, work or play, what we do touches your life.