On October 5th, 2021, CALS International Programs and CALS SAIGE hosted the next entry in their monthly international seminar series. They were pleased to host Dr. Craig Meisner, Senior Technical Advisor for FAO, this time.

Dr. Meisner has lived and worked in Bangladesh for 34 years, holding many positions in the field of agricultural research. During his career, he and his teams have made numerous accomplishments in the area, including but not limited to introducing hybrid maize to local growers, managing arsenic contamination in food chains, implementing permanent raised wheat beds which led to higher crop yields than flat beds, and developing conservation agriculture in Bangladesh and Pakistan. He also worked with Cornell University as a full adjunct professor towards tackling issues such as calcium deficiency-induced rickets, and he received the 2014 International Service Award for the American Society of Agronomy for distinguished work internationally.

The main presentation was titled “How Everyone Works In International Agricultural Science if they Perform Agricultural Scientific Research: Applications World-Wide through my 39-Year International Career.” Dr. Meisner joked that it was not very catchy, but chose it nonetheless as he wanted it to be as comprehensive as possible. After making a clarification of “This seminar is not about me–it is about the various teams within the multiple institutions for which I have worked,” he went on to describe the intention for his presentation. Although he has lived and worked in various countries, this presentation exclusively emphasized his extensive work in Bangladesh.

The first major subject discussed was the success of bed-sown wheat in Bangladesh. As opposed to flat-sown wheat, it has shown substantial increase in yields, brought water savings up from 25% to 50%, demonstrated higher nitrogen response rates, and displayed  less lodging. Because of these benefits, the practice has also been adopted by countries such as the United States, Mexico and Australia, and farmers in other countries across South Asia are beginning to implement it as well.

The discussion was then shifted to the usage of permanent raised beds in general, not just for wheat, but for other major crops such as rice and mung beans. As it is a resource-conserving technology, the implementation of these beds promotes a plethora of efficiencies, namely timely sowing, higher yields, less usage of fossil fuels, better nutrient and water use efficiency, more diverse rotations, prevent residue burning, lower costs, less water pollution from groundwater mining, fewer weeds and pests, reduced CO2 emissions, better crop stands, more C sequestration and better soil health. This highly beneficial process as well as others were made possible through the technology transfer process, in which groups of growers were each loaned bed former attachments and received hands-on training at their respective stations.

There are many other crops that are important to Bangladesh’s agriculture. A very notable one among these is maize. The republic currently has the highest national maize average of any country in Asia due to 100% hybrids, 100% irrigation and adequate fertilization. The former Wheat Research Centre in Dinajpur has even recently become what it has striven for due to the success of maize in Bangladesh’s agriculture–as of 2020, it is now the Wheat and Maize Research Institute, and its Director General is actually a former PhD student of Dr. Meisner’s. Also significant to Bangladesh’s agriculture is fish and shrimp–aquaculture has shown to be quite lucrative, especially for women. They often utilize their homestead ponds for raising carp and tilapia for selling, as well as raising small indigenous species, or SIS, such as mola, for household consumption and nutrition. Yet another notable crop is eggplant, which is Bangladesh’s most endeared vegetable. It was found that to have a marketable crop, farmers would spray eggplants 60-70 times per year to combat borer insects. 3 years ago, Cornell University along with USAID and Monsanto gave a Bt gene to Bangladesh and India to combat insects without the usage of pesticides. Those with Bt now represent over 50% of Bangladesh’s eggplant market, because they do not have to be sprayed. Additionally, crops such as tomatoes, carrots and dragon fruit have gone from undesirable to extremely popular during Dr. Meisner’s career.

Dr. Meisner likes to end presentations with pictures of Hindu temples. For this one, he chose a terracotta one built in 1750 that he has visited often. He describes it as “the most unique Hindu temple in the world” because on its base is a Mughal motif, affirming Islam. This is connected to the rest of the presentation because this mingling of religious cultures represents Bangladesh’s secularity, as well as this – “If Hindu temple builders were willing to ‘break in’ new paradigms for building temples, we must make a greener revolution that delivers nutrients to communities for their health and well-being.” 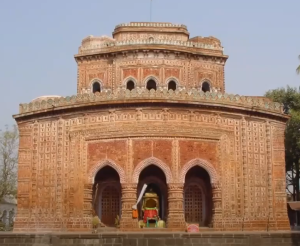 Jaime Adams, Senior Advisor for International Affairs at the USDA, participated in the International Seminar Series where she encouraged attendees to always challenge the norm, explore the unknown, remember that it’s okay to feel uncomfortable, keep up a work-life balance, talk with the locals when you travel, always ask questions, and consider working for the United States government.