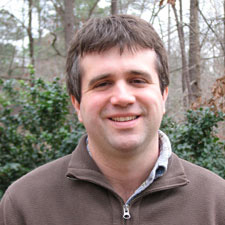 Dr. Reberg-Horton works with organic field crops, particularly corn, soybeans and wheat. Organic wholesale buyers in this state are purchasing an estimated 1 million bushels of these crops, primarily from other states. North Carolina was the leading producer of organic eggs in 2005 and the industry continues to grow. An increasing number of farmers are trying to enter this new market and are working with NC State researchers and county agents to identify the production challenges in our region.

Dr. Reberg-Horton was raised in Fairview, a small mountain community in western North Carolina. He received his B.S. at UNC in Environmental Science. For his M.S., Dr. Reberg-Horton went to the University of California at Davis where he worked on crop modeling in the Department of Agronomy. After working with Cooperative Extension in California and North Carolina, Dr. Reberg-Horton returned to graduate school at NC State where he worked with Nancy Creamer on his PhD. His thesis project examined the potential for breeding cereal rye to be more allelopathic to enhance the weed control obtained from this popular cover crop. This project would not have been possible without the support of crop science faculty, including Paul Murphy, David Danehower and Noah Ranells. After graduation, he took a position with the University of Maine as Assistant Professor of Sustainable Agriculture. He worked with organic dairy farmers on grain and forage production.

Currently Dr. Reberg-Horton researches weed management in organic soybeans, reducing tillage in organic systems, and collaborating with plant breeders on developing better cultivars for organic farmers. He is the SARE professional development coordinator for NC State and is Assistant Director of Collaborative Research at the Center for Environmental Farming Systems.