North Carolina ranks third among states when it comes to agricultural diversity. Our farmers produce about 90 different commodities, but roughly 80% of crops grown here are shipped out of state to be processed. What’s being done to tap the potential for food entrepreneurs, to bring these commodities home, so to speak, to create more North Carolina jobs and revenue? And where does that potential lie?

In this episode of Farms, Food and You, two proponents of food entrepreneurship and innovation talk about the momentum that’s been building for the food manufacturing and processing industry in our state.

North Carolina ranks third among states when it comes to agricultural diversity. Our farmers produce about 90 different commodities, but roughly 80% of crops grown here are shipped out of state to be processed. What’s being done to tap the potential for food entrepreneurs, to bring these commodities home, so to speak, to create more North Carolina jobs and revenue? And where does that potential lie?

I’m Dee Shore of North Carolina State University’s College of Agriculture and Life Sciences. And in this episode of Farms, Food and You, two proponents of food entrepreneurship and innovation talk about the momentum that’s been building for the food manufacturing and processing industry in our state.

Bill Aimutis, a nationally recognized expert in food research and development, is excited about the future of North Carolina’s food manufacturing and processing sector and the opportunities it can open for food entrepreneurs.

Five to 10 years from now, North Carolina will be recognized as a place for food technology, as well as for nutrition technology. We have good soil. We have good water. We have several different climatic zones within the state that enables us to grow a number of different crops. I think we can put ourselves as one of the top food-producing and food-processing centers in the world.

Based on the promise of building the state food industry, Aimutis was lured here to lead the North Carolina Food Innovation Lab, known as NCFIL, which opened in Kannapolis in late 2019. Despite setbacks early on in the COVID pandemic, the lab is full steam now.

It’s one of the outcomes of an initiative that started more than five years ago to grow the economy through food manufacturing and processing, especially in North Carolina’s rural areas.

The General Assembly put funding behind the idea, and NCFIL was built as a partnership between NC State University and the North Carolina Department of Agriculture and Consumer Services. NCFIL offers clients access to world-class research teams and marketing guidance to give their food products the best chance at success. The focus is on accelerating research development and commercialization of plant-based foods.

Our mission is to work with entrepreneurs, especially those in the rural areas, that need help developing and then scaling up and launching new food products in the plant-based food space. A lot of our customers are in the various categories across the entire food chain.

We have some food ingredient companies we’re working with, and we have some people that are doing snack foods, beverages, meat alternatives, dairy alternatives.

Some of the challenges they have as entrepreneurs are that they aren’t as familiar with putting together food formulations that can be scaled up. We have a couple that we’re working with right now that are in what I would call the toddler supplement area. And they’re literally recipes that they make on their countertop. And then when they try to scale it up, they have all sorts of challenges that they don’t even know where to get the ingredients to begin with, other than at the grocery store.

So those are some of the things that come to us then. And then from there, once we develop the formula, so they’re ready to go to a pilot plant or even into a manufacturing environment, most of them are not familiar with the types of equipment that are required and even some of the requirements from the regulatory perspective. So that’s where we try to help them out as they begin their scale up.

Most entrepreneurs haven’t even thought about what the shelf life realistically looks like for their product. Or they’ve probably selling it at farmer’s markets where they’re making it one week and selling it to the next that they haven’t had to worry about putting an expiration date on the product, even though that’s required under the regulatory statutes.

Helping with the regulatory statutes and with marketing is where the North Carolina Department of Agriculture and Consumer Services comes in. Ron Fish is assistant director of marketing and a 30-year veteran of the department. He explains.

Our commissioners, all the way through from Jim Graham when I started to Steve Troxler now, the message has been the same: educate before you regulate. The Department of Agriculture in North Carolina serves to help educate you early on to understand exactly what that regulatory environment is like, how you operate there, where you can find the resources because we want them to be successful.

That’s our role in boosting food manufacturing and processing in North Carolina is becoming a partner with those companies to help them do it in a very intelligent way, a very economically sound way, and very socially and environmentally friendly, sustainable way.

The plant-based food sector was growing at a rate of about 22% to 24% before the pandemic. At the height of the pandemic last year during the summer, we were seeing spikes up to 45% to 49% growth on year.

As it ended the year, we had seen it slip back down to maybe 30% to 35%, but it’s really still maintaining that 30% to 32% growth rate right now into this year. The predictions are that we will continue to see that growth above 25% to 27%.

Aimutis thinks improvements in the taste and texture of plant-based foods is driving that growth, and he sees opportunities for entrepreneurs interested in developing and commercializing new types of products to fill the growing demand.

We really haven’t tapped the center part of the grocery store yet. The dairy case, the meat case have been very popular of course with these plant-based products. And, of course, the produce aisles have always been popular, but I think what we’ll start seeing now as people do more prepared meals, more frozen meals, looking at even more beverages coming out in that plant-based space.

We’ll see the center part of the grocery store become more populated with plant-based foods, or certainly a predominance of plant-based ingredients in those foods as we formulate them. So I look for the next five to seven years to be very active in those areas.

While the Food Innovation Lab is focused on plant-based foods, Aimutis doesn’t believe meat products will be left behind.

The next 40 years with the population growth that we’re going to be witnessing throughout the world, we’re going to need every source of protein that we can grow and raise just to feed the human needs and protect mankind. I don’t see the animal sector going away anytime soon.

While food animal production will remain integral to North Carolina agriculture, generating plant-based food manufacturing opportunities could lead to growth in the crop sector. Crops once dominated North Carolina agricultural income, but with the rise of animal production, it now makes up only 30% of the industry. And that’s reflected in the makeup of the food processing industry in the state.

When you go into the future with the support that we see at NCFIL, the effort across the board for plant-based opportunities and general interest in the industry across the country and around the world in plant-based opportunities, then I say in the next 10 years, we will see a more balanced approach rather than say, 70/30. Hopefully we’ll be more in a 50/50 kind of environment. There’s a lot of benefit on both sides of that equation, whether it’s animal-based or plant-based.

Diversity and market potential is always a good thing from my perspective. With the evolution of animal proteins, I think we can see some more opportunities to further diversify, and we certainly have a reasonable aquaculture industry here. We’re number two in trout, I think nationwide. We like to hang our hat on that. We have a hybrid striped bass industry and crawfish, catfish, tilapia, not to mention the farm raised seafood, the shellfish on the coast. I think we can see more opportunities there, and so I think diversification is the big word in moving forward.

Fish’s emphasis on diversification springs perhaps from what he’s seen happen since his early days growing up on a North Carolina tobacco farm.

I’d say fifties, sixties and seventies, we were practically a monoculture around tobacco. If you grew soybeans, it’s because that was the best rotation for tobacco. If you grew corn, if you made any money, you were pretty much in the Blacklands down East, and you had specialty crops and grains in the upper Piedmont and West, but you still had tobacco throughout from the mountains pretty much to the coast.

And when that industry declined, it really put a lot of us in a spin trying to find some options. So I think to bring about and support more diversification of production, embrace the diversified microclimates we have in the state and take advantage of that going forward is a requirement. It’s not just a wish. It’s a requirement for the future of farming.

To sum it up, Fish says he believes that food manufacturing, processing and entrepreneurship will be vital to the future of agriculture in our state.

If we expand that industry, we have more opportunity, more marketing channels for our North Carolina farmers. And these industries tend to be very long-term industries. When we have plants like the processing mills for wheat and so forth, they’ve been here for decades. Food manufacturers that are soundly built are large facilities, they’re anchor facilities in the state and they are long-term markets for our commodities. And so, to build that processing on site and locally for our locally produced ingredients bodes well for the future of North Carolina agriculture.

Thanks for listening today. We hope you’ll join us again for the next episode of Farms, Food and You. To learn more about the College of Agriculture and Life Sciences and our podcasts, visit go.ncsu.edu/farms. While you’re there, share your thoughts. We’d love to get your ideas and to hear what topics you’d like for us to explore in future.

Bill Aimutis is executive director of the North Carolina Food Innovation Lab in Kannapolis. He has held several research and operations leadership and management positions for companies such as Cargill Inc., Land O’Lakes and Kerry Ingredients. Aimutis holds degrees in food science from Purdue University and Virginia Polytechnic Institute and State University. He is a fellow of the American Dairy Science Association and the Institute of Food Technologists.

Ron Fish is assistant director of the North Carolina Department of Agriculture and Consumer Services’ marketing division, charged with driving the growth of agribusiness in North Carolina. He’s worked with the agriculture department for 30 years. Fish grew up on a tobacco farm Willow Springs and went on to earn a bachelor’s degree in agricultural education from NC State University. 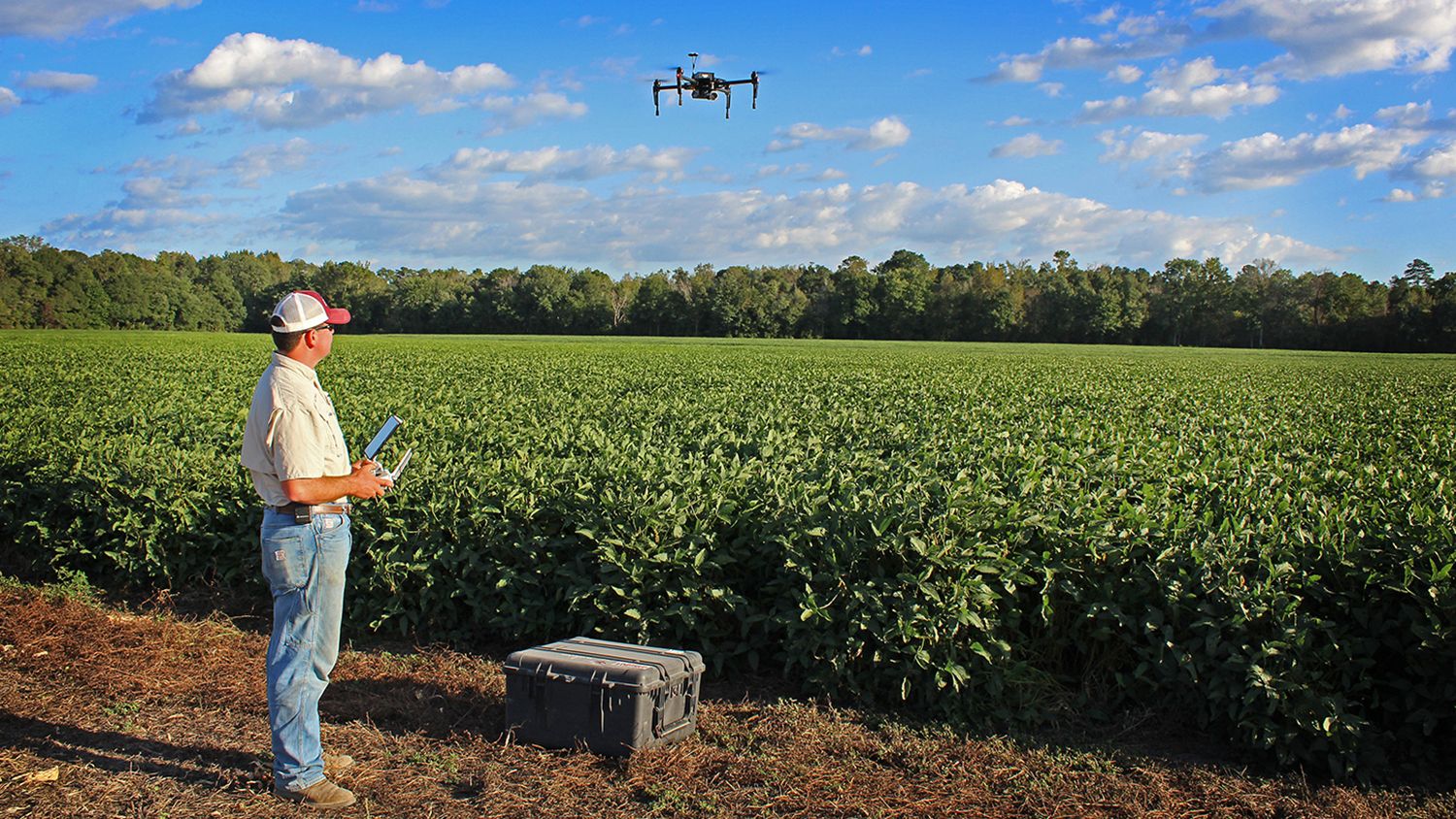 Initiatives to Make NC Ag and Ag Business a $100B Powerhouse

CALS’ three major initiatives — the North Carolina Plant Sciences Initiative, the Food Processing and Manufacturing Initiative, and the Food Animal Initiative — are designed to help the state meet and exceed the goal of growing agriculture and ag business into a $100 billion industry.