I’ve just finished my eleventh week out of twelve here in Peru, but there are still so many new things Peru’s surprised me with! Since my last post, I’ve gotten to: pose with a coconut, plant research potatoes, analyze antinutritients in potatoes, and take a bus over one of the highest paved roads in the world.
One of the biggest adventures of my time here happened just this past Monday, Tuesday, and Wednesday, when I travelled to San Ramón, Peru with two of my coworkers from the International Potato Center (CIP, where I’ve been working in my internship these past 11 weeks). Even the bus ride to get there was incredible: 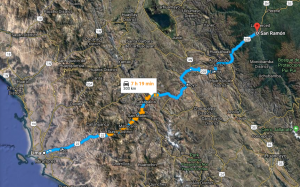 I think the journey took longer than 7 hours 19 minutes, but the beautiful diverse landscape along the way made it well worth the time. Towards the middle of the journey we even saw a bit of snow as we crossed the mountain pass of Ticlio – which, standing at 4,818 meters above sea level, is one of the highest paved roads in the world. Coming back down the mountains into the Amazon basin (where the rain ultimately ends up in the Amazon River), the mountains began to turn green as we passed under the tallest cliffs I’ve ever seen, which at points seemed to stand completely vertically, and at other points to even bend over the road.
We arrived San Ramón Monday afternoon, and Tuesday morning I got to work helping plant a experimental plot of potatoes with the two CIP researchers that invited me, with a lot of help from five local workers. This team of researchers from the International Potato Center (led by Manuel Gastelo) didn’t chose San Ramón because potatoes grow here best – in fact, quite the opposite. Since San Ramón’s tropical climate (moderated somewhat by the elevation) tends to stress out most potatoes (meaning they yield less and produce more antinutrient compounds), by looking at the yield of these potatoes under the relatively hot conditions in San Ramón we can better identify potatoes that will thrive in other tropical highland areas such as those in Central Africa and India.
You can see what Tuesday’s work looked like in these pictures: 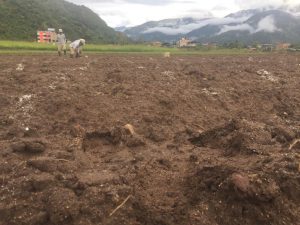 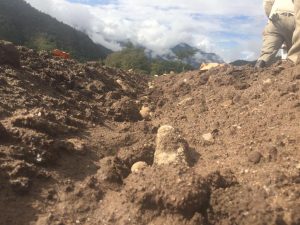 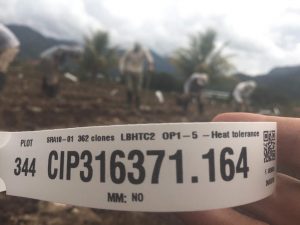 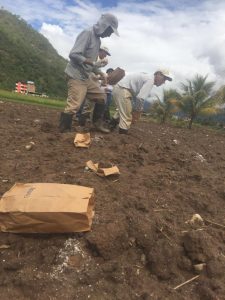 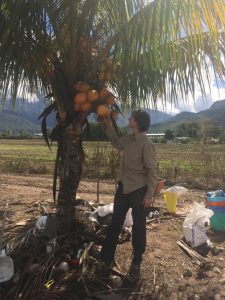 Meanwhile, back in Lima, I’ve finishing up my internship at the International Potato Center. My work has recently looked like two things: translation in the morning and analysis in the afternoon. I’m translating an instruction manual about potato sample preparation and nutrient analysis from Spanish into English (thankfully, not the other way around!) to make things easier for the English-speaking visitors that come to CIP quite often.
In my afternoons in the lab, I’ve learned a chemical analysis for glycoalkaloids, which are organic compounds that prevent humans from digesting certain nutrients and which can also be toxic in excess (the same antinutrient I mentioned above). I’ve also worked with two techniques for analyzing nutrients in potatoes and sweet potatoes (the techniques work for lots of other things, too), called Near-Infrared Spectrophotometry (NIRS) and X-Ray Fluorescence analysis (XRF). Here’s a small glimpse of the work I get to do:
So, I have one more week to enjoy in Lima – hoping to make some time to reflect on all these adventures while finding some new ones, maybe.

An interview with Diego García, a student of Zamorano University in Honduras currently working on an internship at NC State. He is conducting research at the NCSU-affiliated North Carolina Research Campus in Kannapolis, North Carolina.

I AM CALS: Rick Brandenburg Serves Farmers in N.C., 50 Countries

After 38 years, an expert on pests in peanuts and turf finds international work more rewarding than ever.