Organics are the fastest-growing U.S. food sector. Understandably, farmers’ interest in transitioning to organic growing is increasing as well. What was once an alternative food movement has become mainstream, benefiting farmers in economics and us all through land stewardship.

With organic foods fetching a 30-60% price premium and posing the environmental potential to sequester billions of tons of carbon per year, organic farming is attractive – if the transition period weren’t so harrowing. A group of NC State researchers is investigating if soil carbon can fast forward the soil health benefits of organic farming.

The Waiting is the Hardest Part

Organic growing requires different farming methodology, which is challenging enough for conventional growers to adopt. But one of the biggest barriers to organic farming is the 2-4 year transition period lag in soil health metrics.

Without conventional synthetic fertilizers, organic growers are dependent on the soil microbiome for nutrient processing. Farmers transitioning away from conventional systems, there is a definitive lag time before their new organic practices actually start producing the soil health benefits organic crops need. Worse, during the transition phase, farmers are bound to organic practices but can only sell products on the conventional market. That means three+ years of higher input costs without the premium crop payout.

“For a farmer, (organic) transition is hard. You’re following organic practices but still having to sell to the conventional market. We’re asking ‘Could a farmer make an upfront soil carbon investment and come out 5-10 years ahead in soil health benefits?” Alex Woodley, NC State assistant professor of soils said. 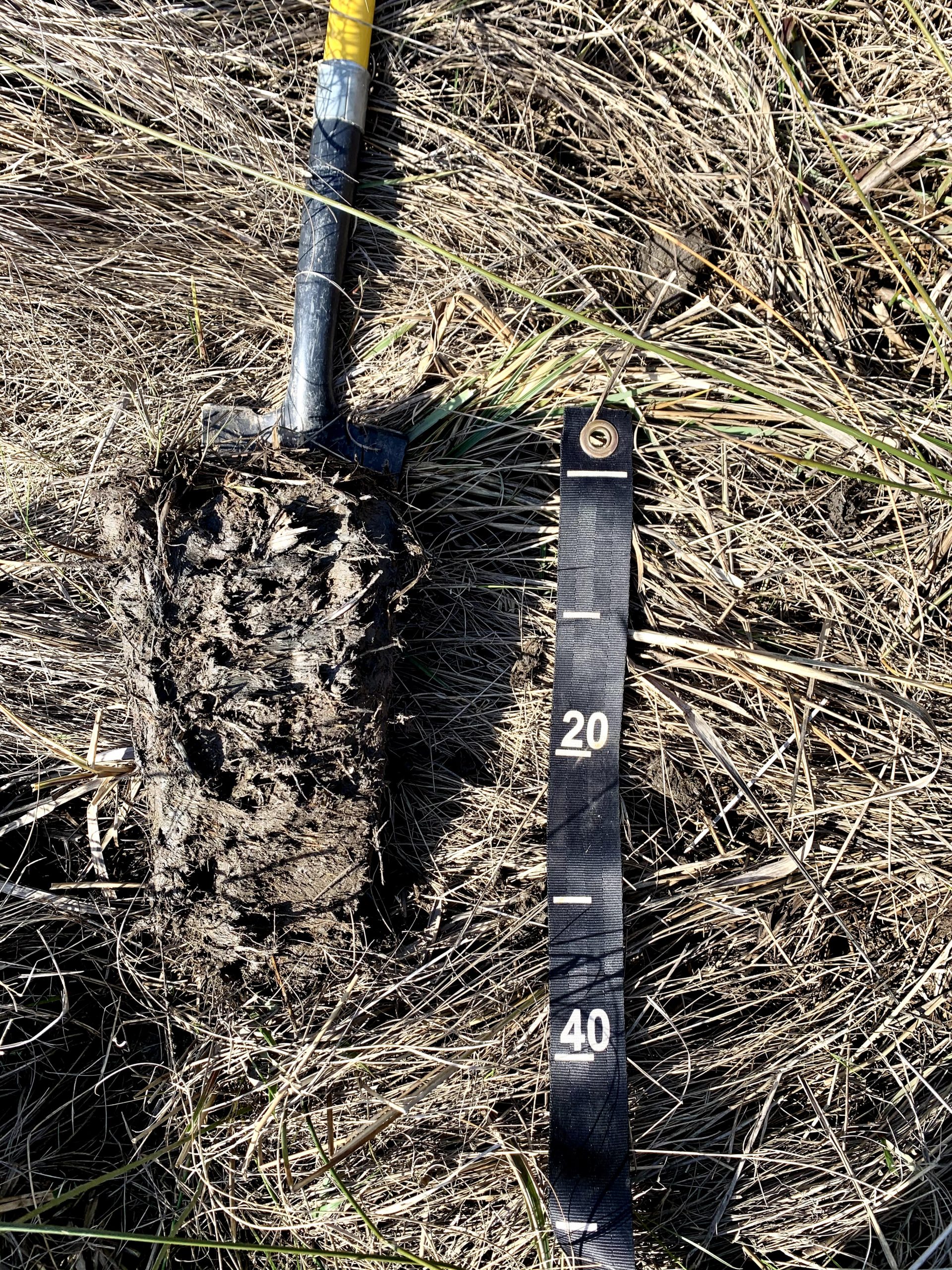 The team is taking a two-fold approach to carbon accrual, starting by defining the range of soil carbon potential in sandy soils. The team wants to establish a baseline minimum and maximum for carbon accrual when a farmer transitions from conventional to organic systems. They expect to see a significant (+40-150%) increase in soil carbon, which likely levels off after some period 60-80 year period. 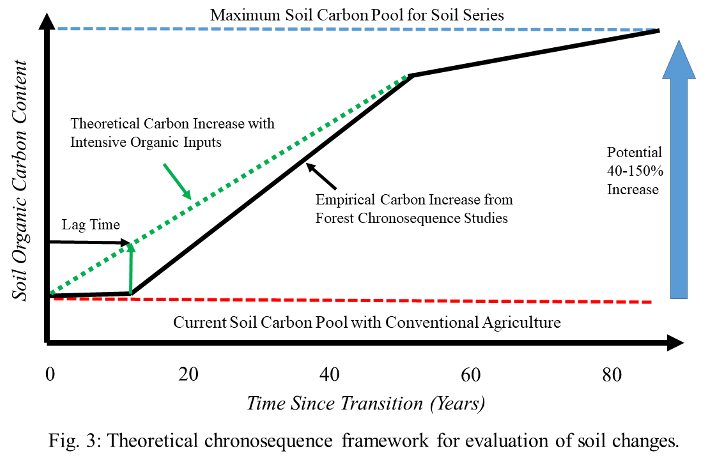 Without any 80-year-old organic farms in this region, the team is using a creative methodology that pairs agricultural soils with forested sites on the same property. It’s a means to compare conventional agricultural soils to nature’s system.

“It’s a time for space tradeoff,” fellow researcher and fellow investigator Matt Ricker said. “Based on when the acreage was reforested, we can look back to see the difference of organic management on soil health.”

By evaluating the range of soil health progress from organic practices, the team will educate growers on what to expect from their soils during the transition period and beyond.

“We need to determine what the bounds are for soil health testing in the southeast,” Woodley said. “Any sandy southeastern soil health test will come back poor – they are compared to Midwestern soils with 4% organic matter! Producers need more than that to make decisions. There should be incremental soil health improvements we can define for this region.”

The team’s second goal is to compare the impact of several carbon inputs on soil health and resulting crop yield.

The investigation will compare organic soil amendments of cover crops, compost, biochar, and a 50/50 mix of compost/biochar on a three-year corn, sweet potato and soybean crop rotation. The team will compare each input in a single mass application versus annual additions. They will track soil health metrics, nutrient uptake, and crop yields.

“We want to advise farmers if it’s worth the money to invest heavily in carbon soil amendments during the organic transition phase. Or should they just bite the bullet and wait for the slow progression of soil health build-up?” Woodley said. 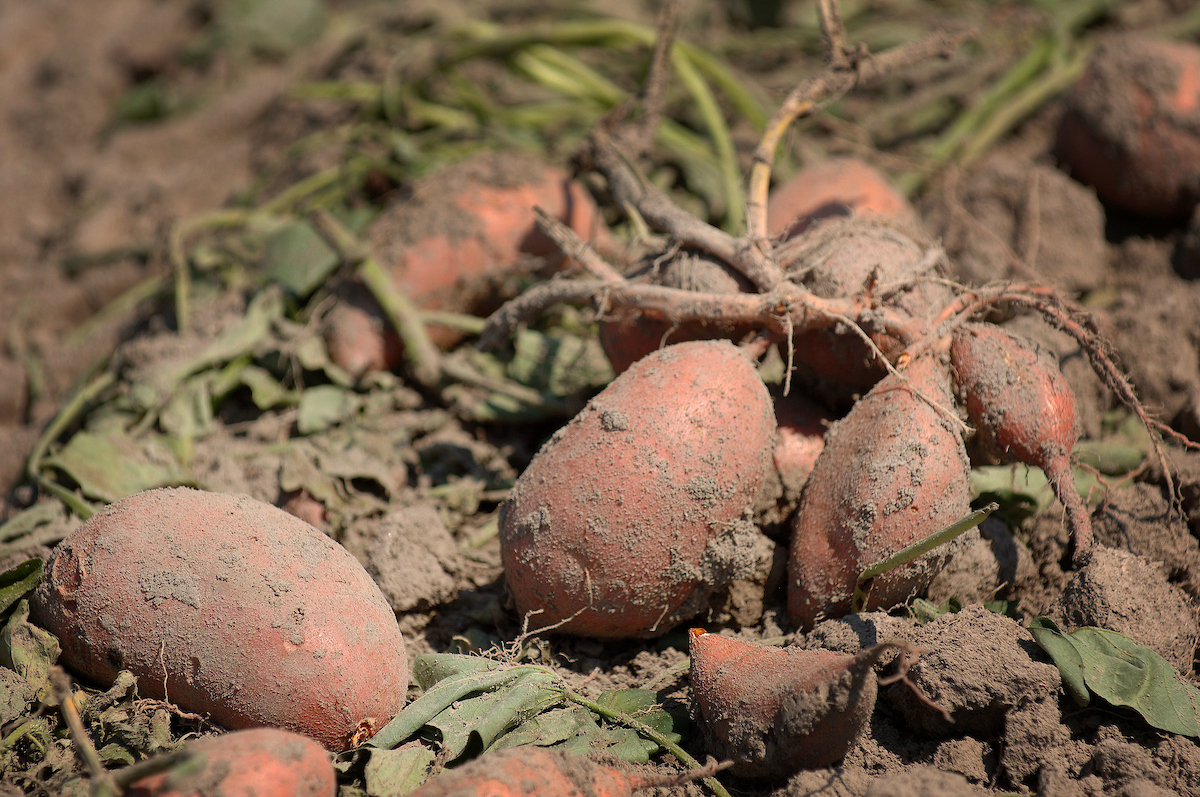 “There are different strategies to build soil carbon. Cover cropping is the fastest to break down but may only leave 5-10% carbon after a year. Composting is more stable with 50% breakdown,” Woodley said.

But he says biochar is unique because it is extremely stable in the soil. “It will stay there for 50-100 years. We know biochar can build soil carbon, but the question is will it also improve soil health parameters along the way?” Their findings will shape a farmer’s soil amendment choice depending on the carbon’s intended purpose.

With political and environmental news increasingly focused on climate concerns, the team’s research is timely for organic growers and those interested in carbon markets. Woodley and Ricker’s organic transition study is part of a larger research community in crop and soil sciences investigating climate adaptation through soil and agricultural management.

The newly formed research cohort (Climate adaptation through Agriculture & Soil Management or CASM) is pursuing these topics for subtropical regions, like NC, which have unique soil carbon-storing conditions.

“Soil management is key to building resilient ag systems that can support growers and maximize the ecosystem services soils can provide for climate mitigation,” fellow CASM researcher Josh Heitman said. “Solutions that may work for other regions may not be the right targets for soil health here. Work by the CASM team seeks to emphasize solutions adapted for soils of the subtropics.”

“Organic farmers are very knowledgeable about their soils,” Woodley said. “They have to be especially in tune since they aren’t using synthetic fertilizers. We want to show how long-term organic production benefits soil health both ecologically and in yield. It’s win-win.” 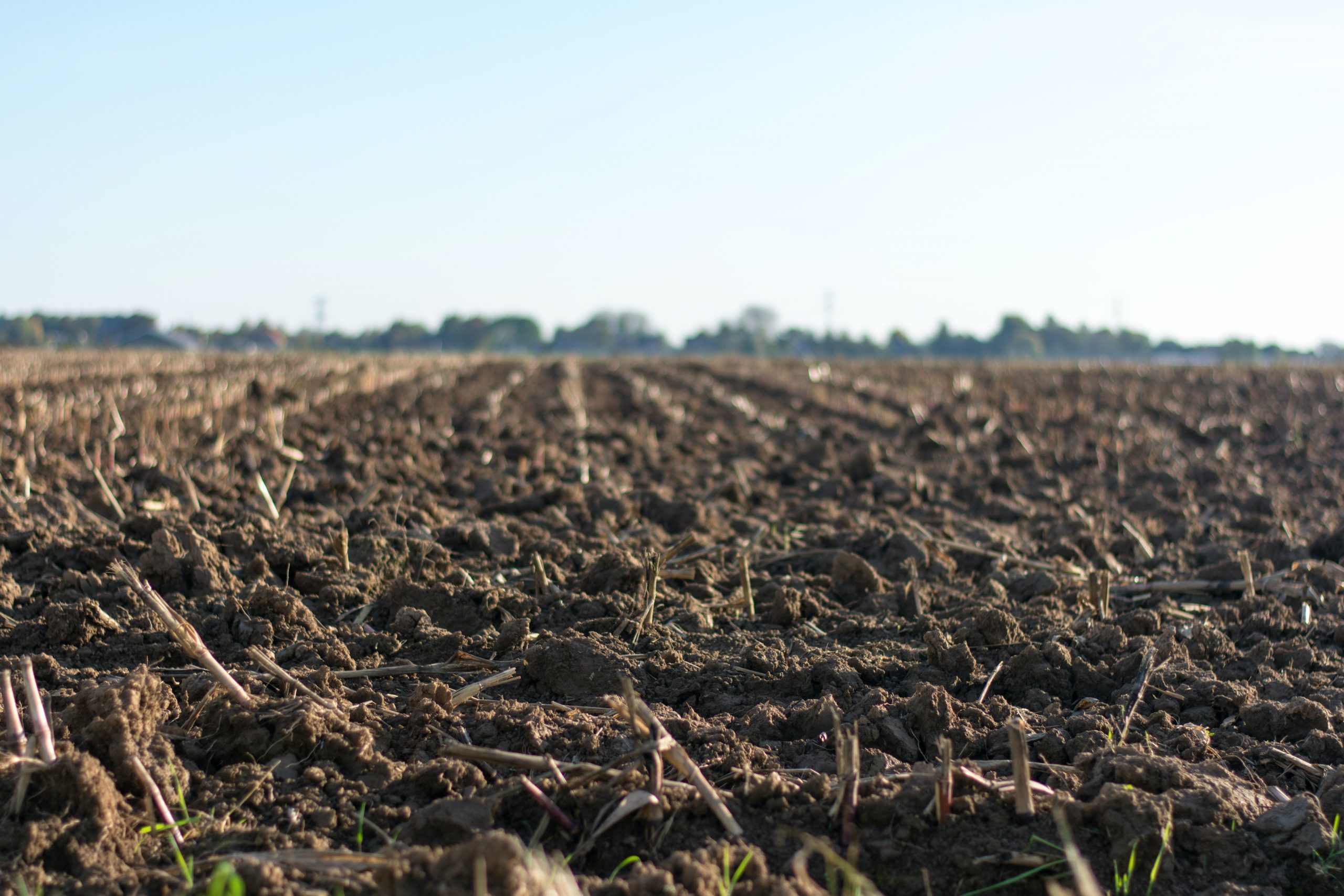 If you are a student interested in organics, agronomy, or soil science, investigate our undergraduate and graduate degree programs and be sure to download our soil science ebook. Then join us for a guided email tour of our department and university.

Enhancing NC agriculture through organic soil management is just part of how we are growing the future. 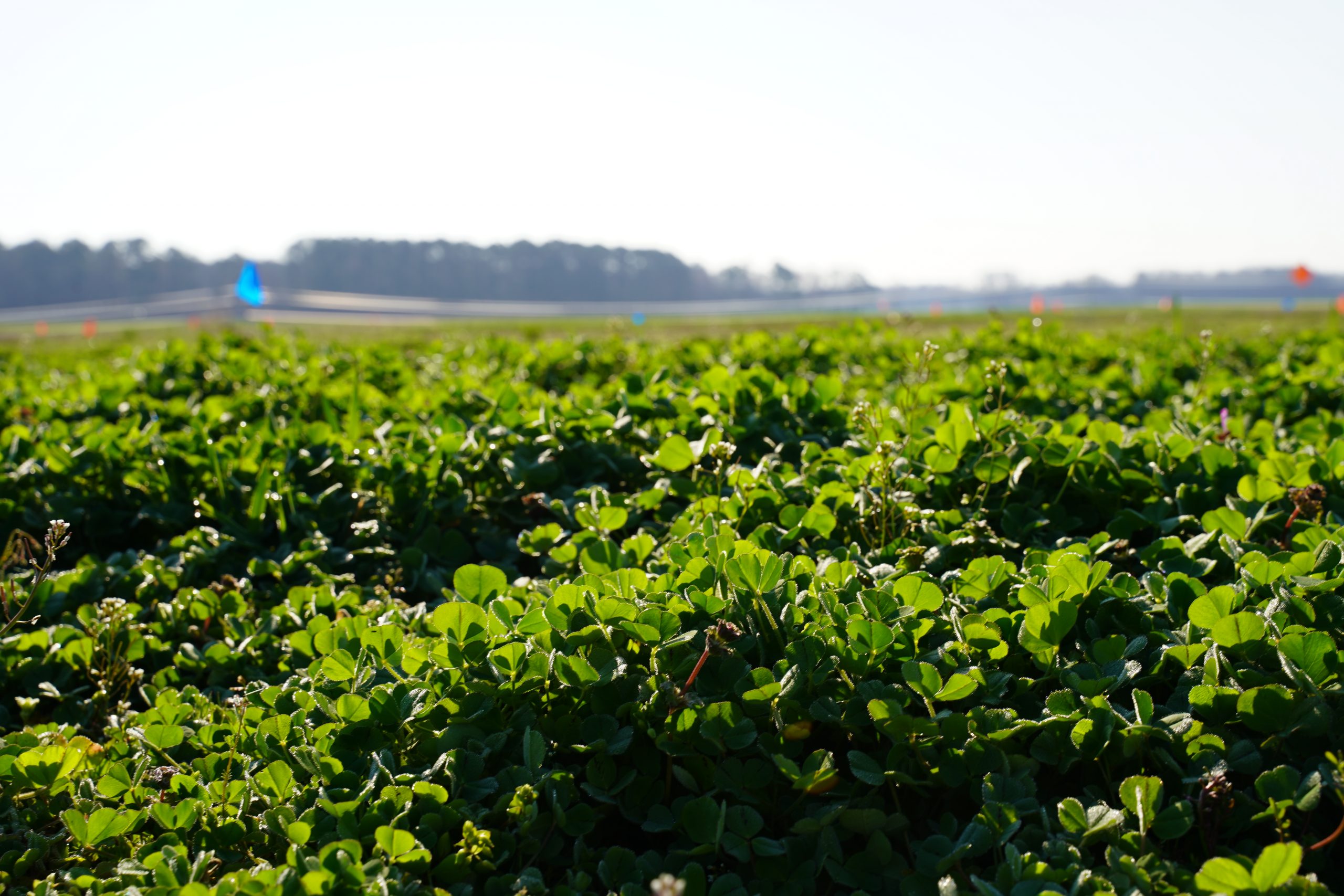 NC State alumnus John Jeffreys of Pinehurst No.2 reveals what golf course superintendents do and the path turfgrass students can follow for success.