The North Carolina Society for Farm Managers and Rural Appraisers held their winter meeting on February 14th at the University Club. Commissioner Steve Troxler visited the group and gave remarks on the state of agriculture in North Carolina.  The Department of Agricultural and Resource Economics was well-represented by its Extension Specialists who presented on current issues related to agriculture. Their discussion of timely topics are summarized and their presentations are provided below.

Rod Rejesus provided an Update on the 2018 Farm Bill. While the bill mostly upholds the status quo, some tweaks and changes were made. Rod also discussed the nuances of Whole Farm Insurance.

Andrew Branan explored Agricultural Legal Issues such as the potential future of Waters of the United States (WOTUS) rulings. His legal perspective shed light on environmental issues like Voluntary Agricultural Districts and the hog nuisance lawsuits.

Mike Walden presented his economic outlook for 2019. Walden analyzed the chances for global recession and discussed emerging trends in the North Carolina economy. His 2019 outlook also contains the monthly index of economic indicators which provides a historical context to the current economy in NC.

Lucas Stegall, a senior in Agricultural Business Management (ABM), was the 2018 scholarship recipient. He joined the group for lunch and thanked the Scholarship Committee and society members for their generosity. Lucas also has a younger sister who joined the ABM program this year.

Heidi Schweizer provided an Introduction to Blockchain. Blockchain is a relatively new idea that ledger systems can create easily traced products from the field to the market. The benefit of blockchain is that it is a fairly secure method for tracking activities and goods through the supply chain. Heidi will be continuing to research blockchain in respect to agriculture. 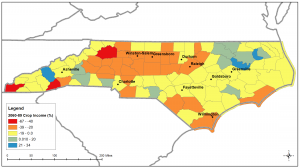 Eric Edwards discussed Climate Change in NC: Crops, Land Values, and Water. After looking at rainfall changes over time, Eric extrapolated how rainfall amounts in NC in the future. He then proposed ideas that could mitigate the excess rainfall or drought which is extremely important because crop yield is dependent on specific and consistent amount of water.

ARE Excels at the 2022 Extension Conference

Our department's extension faculty and associates had the opportunity to present their research and attend workshops at the 2022 Extension State Conference.