‘Tis the Season for Poinsettias

This time of year, tabletops, lobbies, front doors, fountains and offices are adorned with the rich red velvety leaves of the unofficial Christmas flower: the poinsettia.

A shrub, not a flower, this tiding of good cheer hits its peak colorfulness in late November through mid-December in the United States thanks to some greenhouse breeders who know how to keep the tropical plant happy. One of them is Brian Jackson, a professor of horticultural science at NC State. His particular focus is soil research and how to get the plants what they need while making their soil more sustainable and more economical for breeders across the United States.

In this episode of Farms, Food and You, we chat with Jackson and discover that this horticultural harbinger of the holiday season has a surprising history and a colorful future ahead of it. He’ll also set the record straight about a prevailing poinsettia myth that drives him and other breeders bonkers.

This time of year, tabletops, lobbies, front doors, fountains and offices are adorned with the rich red velvety leaves of the unofficial Christmas flower: the poinsettia. A shrub, not a flower, this tiding of good cheer hits its peak colorfulness in late November through mid-December in the United States thanks to some greenhouse breeders who know how to keep the tropical plant happy.

One of them is Dr. Brian Jackson, professor of horticultural science, who is responsible for some 29 varieties and roughly 800 plants in the NC State greenhouse on campus. His particular focus is soil research and how to get the plants what they need while making their soil more sustainable and more economical for breeders across the United States.

Today on Farms, Food and You, we’ll chat with Jackson and discover that this horticultural harbinger of the holiday season has a surprising history and a colorful future ahead of it. And, he’ll set the record straight about a prevailing poinsettia myth that drives him, and other breeders, bonkers.

The two- to three-foot-tall poinsettia plants we’re used to putting on display aren’t quite the same as the poinsettias that grow in the wild. Native to Central America, poinsettias are woody plants that look a little different, both in size and shape.

The first poinsettia that I saw growing naturally was actually in Mexico, in Oaxaca, but I’ve also seen it in Peru when I was hiking the Machu Picchu Trail. They are 12-15 foot tall poinsettias that look nothing like they do today, except the flower structures themselves. You would recognize it from its flower, but the overall plant itself is, you know, a 12-foot tree.

The Aztecs cultivated them in gardens, utilizing the leaves to make red and purple dyes, and extracted white sap from the plants for use in medicines. Local legends in Taxco, Mexico, say that the plant was gathered as an offering for newborn Jesus, and came to be called la flor de Nochebeuna, meaning “the Christmas Eve flower.”

So how did this tropical plant make it to North America, and why is so much smaller than the original native plants?

In the 1800s, they were first discovered, at least by Americans, by the U.S. Ambassador to Mexico, and they found their way into the United States market.

That U.S. Ambassador’s name? The plant’s namesake, Joel Roberts Poinsett. But it wasn’t Poinsett who made them a household holiday tradition.

It was a family, Paul Ecke out of California, who first began to collect some of these specimens from Mexico and bring them to the United States to his farm in California. And it was the Paul Ecke Ranch in California that developed the techniques and technologies that allowed poinsettias, which are naturally small trees in the natural environment in Mexico, to shrink in size, not being too generic there, but how to make them smaller so that they are actually potted crops. And then, over the last 75, 80 years, they’ve developed into the varieties that we have today.

Breeding trials at various universities across the country helped to create and evaluate new varieties, new colors and how they perform in the market. As a result, poinsettias have flourished and developed a booming industry that results in $250 million to the U.S. economy in a span of six weeks each November and December.

Beyond the traditional red and white varieties, poinsettias now come in a variety of colors: pink, salmon, maroon, yellow and a new variety named Autumn Leaves, where the colors are peach, yellow and orange and bloom closer to Halloween.

Jackson’s research program is helping to ensure that greenhouse growers can continue to produce healthy plants and new varieties and colors while reducing the cost of the soils.

My involvement with poinsettias started about 10 years ago.

I love the crop. I love the plant, but it’s also one of the most important, economically speaking, floral crops that has grown because of its popularity during the Christmas season. So this is the 10th year that I have incorporated poinsettia trials into my research program with the specific emphasis on their performance and growth efficiencies in different soil media types that growers are using or are wanting to use to grow their crops.

So for 10 years, it’s been a partnership with some of the soil companies in the United States that offer soil products for greenhouse growers to purchase to grow their plants. So we’re looking at a lot of different components to these soil mixes, as well as different fertility regimes and how the fertilizers and the soil affect the growth of the poinsettia.

And one of the reasons, in addition to my interest, poinsettias as a crop, poinsettias are very responsive to soil conditions that they do not like. So for example, we refer to them as model plants in that we plant them and if they are not happy with the soil pH or the soil fertility or the water air balance, then they will tell you. And by telling you, I mean that they will not grow optimally. So they’re really good indicator plants for the soils that we’re growing them in, so they are among crops that we grow every year to test our new engineered soils that we’re developing here in our lab. And then the plants kind of speak for themselves as to, you know, how they like the soil they’re growing in.

With the poinsettias as his guide, Jackson is working on new combinations in soil to replace peat moss: one of the most effective soil media that also happens to be one of the most expensive.

Peat moss has been the substrate or the soil component most used in the past 70, 80 years.

And there is a growing interest in reducing the use of peat moss in horticultural production and to find other materials that can perform equally as well that maybe do not have the carbon footprint that peat does, or new components that can be grown or are made locally and not shipped in from another country, which peat moss is. So we are evaluating a lot of new materials to supplement or as alternatives to peat moss. And the challenge with that is peat moss is an excellent growing media, and it’s almost superior in many ways, but when we look at new alternatives, we have to investigate all the things that could be different than peat moss, so the pH or how nutrients behave and how the plant responds to that. So the primary emphasis is on developing new growing media and trying to optimize those new growing media to perform as well as peat moss has. It changes year by year because within the varieties of poinsettias, they all do not perform the same.

Two primary points of emphasis my lab currently is focusing on the understanding of how to utilize engineered wood fiber, which is very prevalent in North Carolina. And we’re able to create and literally make substrate products here in state that can be used for growing poinsettia, as well as most any other crops. So I think the confidence that we’re getting in developing these new engineered substrates is really having a great impact on the growers and on the economy.

I would also say the overall emphasis in water management and trying to extend the post-harvest shelf life of poinsettias as it relates to water management and keeping them from drying out so quickly. I’m really excited about some of these things which have implications not only for growers in our state and beyond, growing these plants, but also for the consumers who are getting these plants at home and hopefully extending the period of time that they get to enjoy them.

The result: beautiful, healthy poinsettias and a reduced growing cost and an immediate impact on the North Carolina market.

One of the largest greenhouse operations in North America is located just north of Charlotte in Huntersville, North Carolina, Metrolina Greenhouse. And Metrolina Greenhouse is the largest single structured greenhouse in North America. And when you walk in, it’s a 200 acre greenhouse, so you cannot see the other end. The earth tilts before you see the other end of this, it’s phenomenal. And they grow millions of poinsettias every autumn. And what the contributions that some of our research has had is that they now are growing their poinsettias in a lot of peat alternative soil media that in the last four to five years have saved them substantial amounts of money while also being proactive relative to using more sustainable growing media components.

So what I think the work from our lab has helped contribute to, not just that greenhouse, but also all other growers, is giving them the data and the confidence to switch the growing media types that they’re using, but still be able to grow crops at the high level of performance and quality that they are used to growing in their traditional all peat mixes.

It is extraordinarily rewarding when a research program like mine in soilless substrates and soilless growing of various horticultural crops, that the data and the innovations that we’re able to contribute to have immediate impact on growers and the industry. And it can sometimes be as immediate as the following year, when we publish work or that we have findings that we’re confident in, the industry adopts those changes almost instantaneously. And that is a very encouraging thing for an applied research program like many others across the college that aren’t just contributing to the broader body of science, but have immediate economic and environmental and even human impacts on our industry. So that’s very exciting for us.

So what happens to all those poinsettias left over from Jackson’s trials? You’ll see them around NC State campus and in the homes and offices of Jackson’s colleagues. And he wants to set the record straight on a prolific poinsettia myth.

So spread the word, your pets and children are probably more likely to hurt a poinsettia than a poinsettia is to hurt them, but still keep both from eating your holiday plant.

When you pick up your poinsettias this year or a friend gifts one on your front step, think a little about this beautiful plant’s history and the applied research that keeps it healthy and happy during the season.

Thank you for joining us on Farms, Food and You. This podcast is a product of NC State Extension and the College of Agriculture and Life Sciences at North Carolina State University. If you would like to support the show, please share this episode on social media and leave a review on your podcasting app of choice. Let’s talk soon! 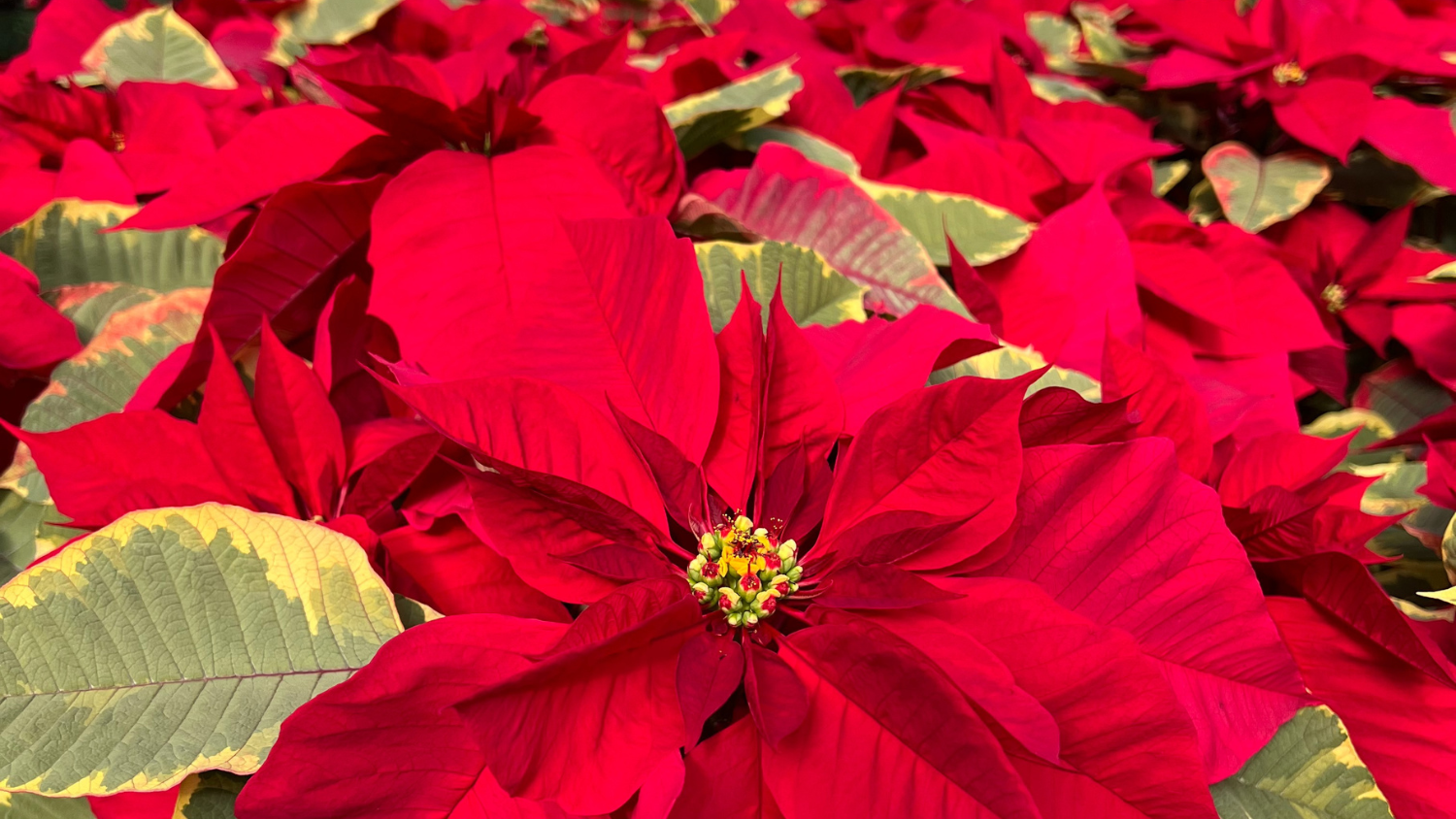 Dig into his research 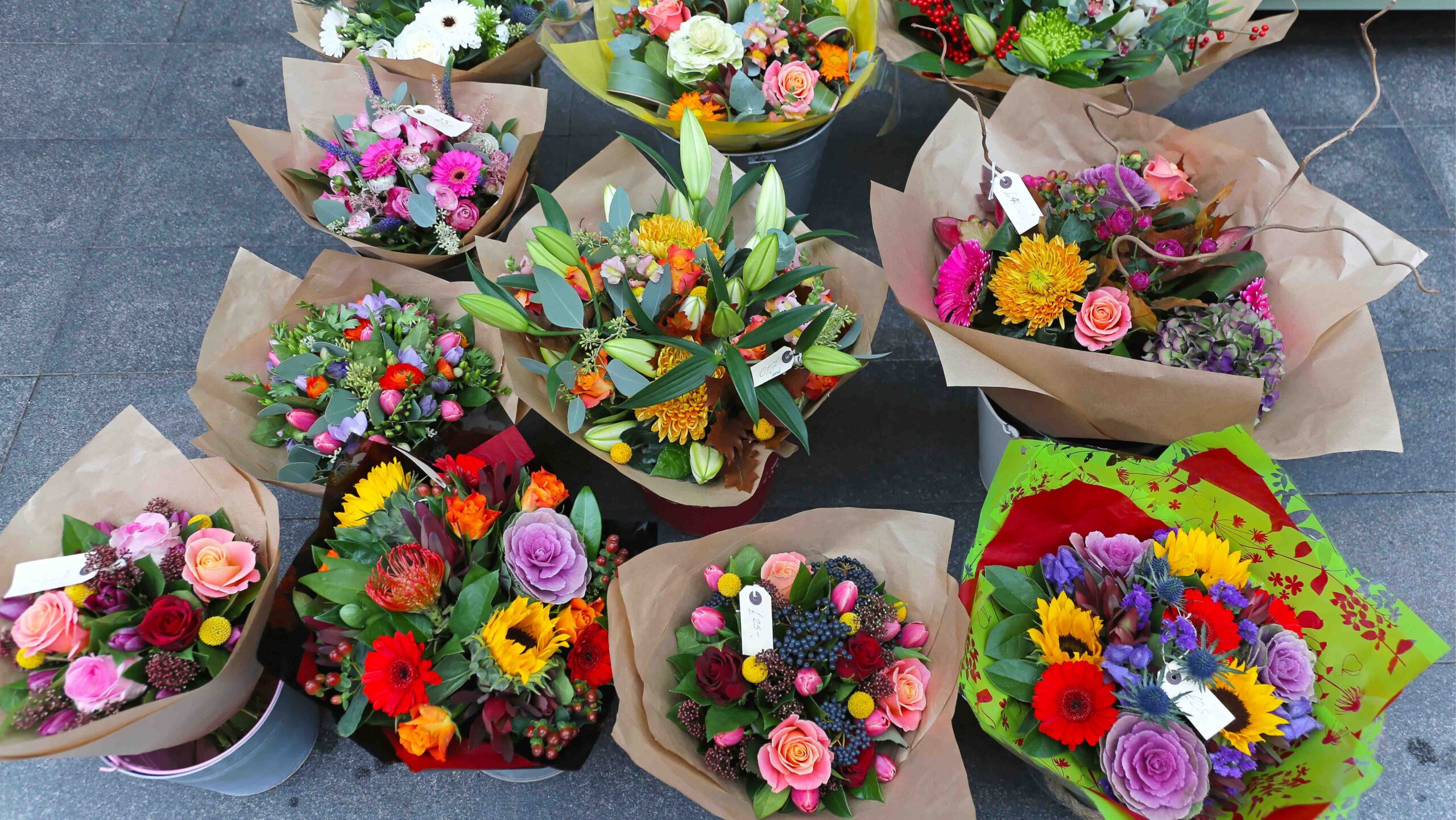