The (Turf)grass is Always Greener on the Other Side

If a whiff of fresh-cut grass makes you start humming “Take me out to the ball game,” then you’re either itching for spring training, passionate about turfgrass management, or both.

In our latest episode of Farms, Food and You, we’re learning all about what it takes to make that ballpark green and healthy, along with why North Carolina is such a great spot for turfgrass research and the industry. We’ll chat with NC State Professor and Extension Turf Specialist Grady Miller and Durham Bulls Ballpark Head Groundskeeper Cameron Brendle to understand that a pretty patch of grass takes a lot of know-how—and sometimes, a little bit of make-up.

If a whiff of fresh cut grass makes you start humming “Take me out to the ball game,” then you’re either itching for spring training, passionate about turf grass management, or both. On today’s episode of Farms, Food and You we’re learning all about what it takes to make that ballpark green and healthy, along with why North Carolina is such a great spot for turfgrass research and the industry. We’ll chat with NC State Professor and Extension Turf Specialist Grady Miller and Durham Bulls Ballpark Head Groundskeeper Cameron Brendle to understand that a pretty patch of grass takes a lot of know-how—and sometimes, a little bit of make-up.

Nationally, the turfgrass industry covers 50 million acres in the United States and is a $40-$60-billion-dollar business. That may sound like a lot, but it starts sounding about right when you consider that the U.S. has 700,000 athletic fields, 80-100 million home lawns, more than 17,000 golf courses and millions of miles of roadsides.

Here in North Carolina, turfgrass is grown on over 2 million acres, more than any other crop in the state. For those that want to learn how best to grow and manage it, there’s no better program than the NC State Turfgrass Management Program. One of its leading researchers is Professor and Extension Turf Specialist Grady Miller. He’s pretty much the go-to guy in the industry. He was part of a U.S. envoy to evaluate the 2007 Olympic turfgrass venues in Beijing and is a past advisor to many college and pro sports teams including the Chicago Bears and the Italian Soccer Premier League.

Why does he know so much about turfgrass? Well, it has to do with North Carolina’s climate.

From a standpoint of where we are in the country, we’re called a transition zone. So we grow both warm- and cool-season grasses. Whereas if you get further north a couple of states, it’s only cool, and certainly South Carolina, it’s only warm-season grasses. So from both a production and a management standpoint, we grow more grasses than anybody else in the country, really, both in production for the eastern part of the state, which is mostly warm, and then the western part of our state, which is almost all cool-season grass. And with Piedmont, there’s kind of a blending.

So our sod production, as well as our management practices are pretty diverse in this state, just because of all the germ plasm and different cultivars, warm and cool season that we grow. It’s very unique.

For an extension person, such as myself, it offers a lot of challenges and opportunities for us to deal with a lot of different scenarios, because there is no one best grass in North Carolina. There’s a best grass for a situation, but not one best grass.

Miller spends a lot of time on research trials to figure out how best to grow and manage those different kind of grasses.

My research program, we’re fairly general and broad in many cases. I have some things going on in the sports turf management area, which has always been kind of an area I’ve enjoyed working in.

But probably the number one area I get questions and have to deal with is homeowner turf. So we do a fair amount of new turf introductions, looking at new germ plasm that’s more sustainable, less inputs of fertilizer and water and things like that in our testing, and certainly, trying to determine good programs for fertilization for homeowners and things like that.

I have a large project right now with DOT looking at roadside vegetation. There’s an interest in trying to introduce grasses that do not grow as fast or as high, and also are able to naturally suppress weed encroachment, so it’s easier to maintain a roadside, which is already a low maintenance area, but just trying to make it more attractive and easier to maintain. And also, safety is always of concern for DOT when cars leave the road, having a safe place to recover and return to the road surface. So those are three areas right now I’m doing a lot of work with. Primarily as I mentioned, sustainability, water management, nutrition and aspects for sports turf and homeowners.

Miller and the Turfgrass program share their recommendations online on a site called Turfiles. It’s a great resource for homeowners, groundskeepers and other turfgrass managers. An example of a recommendation is one for grass colorants. That’s right, sometimes turf managers paint their grass to make it look more appealing.

A colorant, in simplest terms or analogy, is almost like makeup. It’s just putting green color onto the grass surface. You can highlight a green color, if it’s not the green you want, but you want a darker green or something like that. Or if you have brown turf from dormancy or damage, you can certainly help mask those imperfections by using a colorant.

And there’s a number of products that have been developed over the last 12 or 15 years that we have tested, evaluated. And we have some nice pictures of what they look like painted on the grass and a lot of advice and tips on how to use these products in a colorant publication that can be found on TurfFiles.

Probably the leading use of those products are athletic fields in the fall. And high-definition TV has really resulted in a situation where people want perfection as it looks on TV. So a lot of times, they are used to hide blemishes. Most all of your NFL and your major college sports fields will get some application of colorant if they have a TV game, at least in the fall. They have been used a lot on golf courses, as well as painting greens in the wintertime. They have nice green color during colder times of the year that a warm-season grass make go off color. And in a few instances, our landscape companies have treated landscapes and lawns during periods of drought where the grass turns brown. It’s an opportunity to hide that drought turf. So they have a number of different uses, but I would say sports turf is the primary user of these products.

Being experts in Turfgrass management has attracted a lot folks to NC State’s program, and produced a crop of professionals in the industry across the state’s biggest sports teams.

Since we are the primary trainer of turfgrass managers through our programs at NC State, most all of the venues across the state, whether it’s the head person or one of the assistants or somebody on the staff, just about every one of them I can think of has an NC State person there because they’ve come through our program. So whether it’s the Carolina Panthers, the Durham Bulls, UNC Chapel Hill, NC State’s facilities, I mean, pretty much across the state we’ve got a great population of our graduates at these venues, maintaining some high-use, highly-visible facilities.

One of those graduates is Cameron Brendle, head groundskeeper at the Durham Bulls Baseball Park.

With the Bulls for the past 11 years, Brendle implements turfgrass management techniques he learned while in school. And not just for the Durham Bulls. The Duke University Baseball team also plays at the park, meaning that Bermuda grass turf sees a lot of action. The challenge is keeping that grass field healthy amidsl the wear and tear of two teams and North Carolina’s unpredictable weather.

The elements are the biggest thing you have to deal with.

This year’s probably going to be our trickiest year, leading up to the Bull’s season opener. Because of Duke’s schedule and how it leads up all the way to till our opening day. We’ll probably throw a little bit of paint, not too much. It kind of acts as a fertilizer. So it attracts more heat to the turf. So that kind is like a cheating mechanism I guess you can say, to kind of help you out. Also kind of make things look a little bit better,

I got to give a shot out to my guys, because I can’t do it without them.

I got a crew of about 25 guys every year. And usually there’s only about five or six that work with me on game day. So sometimes we’ll have to throw the growth blankets on to protect it from the freezing ross and stuff that we get. It’s definitely challenging this time of year and getting to the point where we don’t have to use those anymore. And we’re fully grown in Bermuda before anybody else is, it’s paid off tremendously over the past five years.

Making the grass look pretty is only one challenge. Brendle reveals it’s also about keeping the team safe by making the field as consistent as possible for the players.

Those guys thank us every day for what we do because we make their lives a little bit easier on the back end and they can tell that we care a lot about them. Because at the end of the day, I don’t want to see anybody get hurt for what I get to do and get to see every little spot on the field to make sure it’s ready and good to go for the game that day, or just practice in general.

like Grady said, most of all of our guys around the area are NC State grads and Casey Carrick at Carolina, he’s an NC State grad and he loves Carolina where he is at and we just love doing what we do and we can pick each other’s brains. And that’s the best part about it is being around the area in the triangle and having NC State there to be able to get the information out of what’s going on here at this ballpark or there at that ballpark, that kind of thing.

So when you’re out at the ballpark this spring and summer, take a big whiff and a close look at that Bermuda grass. Know that there are a lot of folks making it safe for the players and pretty to look at. Bu, make sure you take Brendle’s advice.

Come out to the ballpark to enjoy some good food and some good entertainment.

Thank you for joining us on Farms, Food and You. This podcast is a product of NC State Extension and the College of Agriculture and Life Sciences at North Carolina State University. If you would like to support the show, please share this episode on social media and leave a review on your podcasting app of choice. Let’s talk soon! 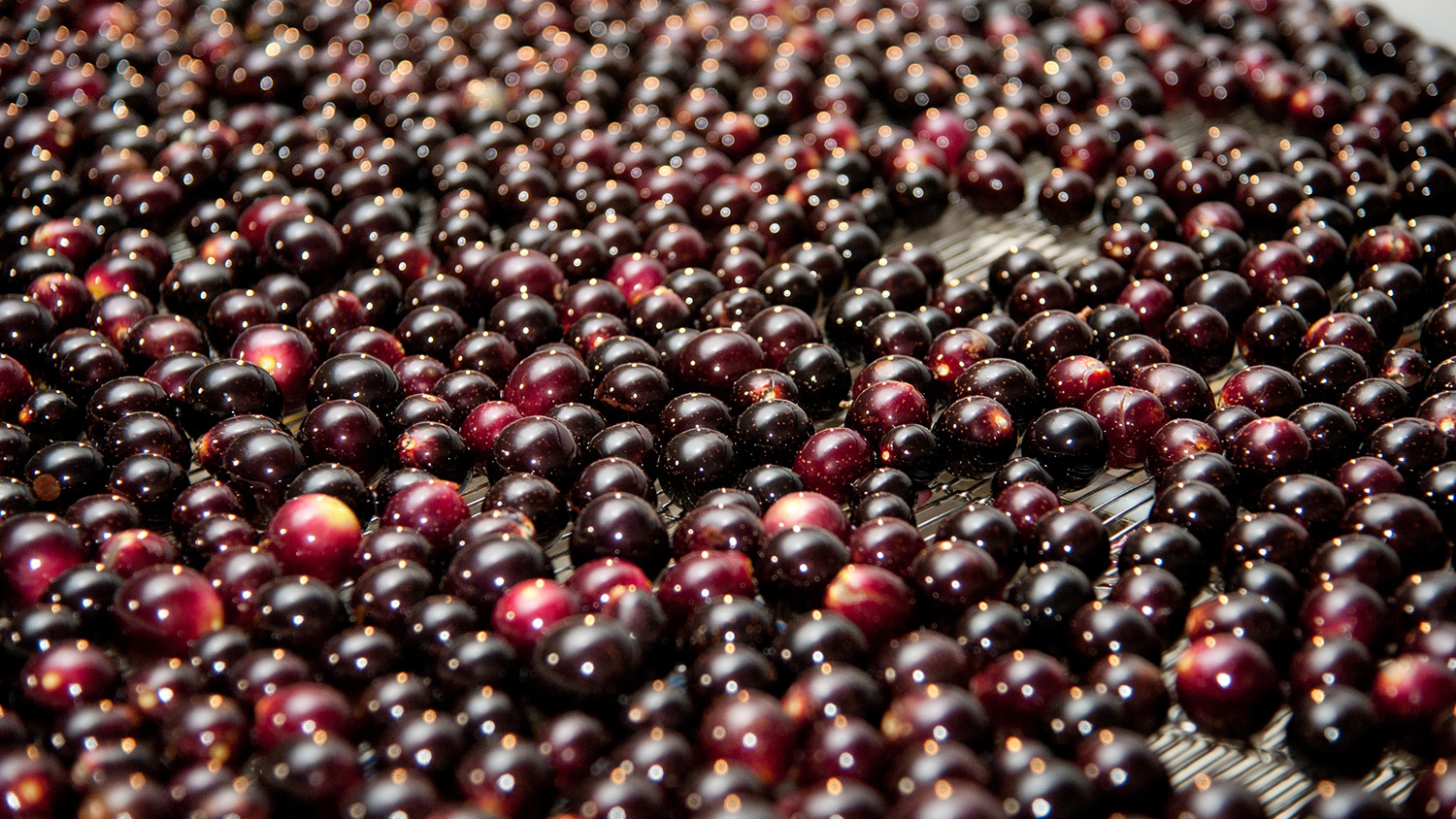 Farms, Food and You: Plants in Space