The CRISPR/Cas9 system has tremendous potential for improving crops by changing their genetic code. That does not necessarily mean inserting foreign DNA, but the systems used to deliver CRISPR/Cas9 into a plant’s cells often do, which means the relevant crop is a GMO. GMOs undergo a rigorous evaluation process, and many consumers prefer non-GMO products.

The Department of Agriculture (USDA) and the Food and Drug Administration (FDA) regulate genetically engineered crops and have standards defining GMO crops. These are focused on DNA sequences from other species present in the end product.

Deleting or turning down a gene, such as the one responsible for turning sliced apples brown, does not introduce foreign DNA and thus is a non-GMO method. Similarly, altering the expression of a gene related to pest resistance in a variety of sweetpotato to make it more resistant could be a non-GMO method.

In a new study published in the journal Plant Cell Reports, Wusheng Liu, a plant biologist and biotechnologist in the Department of Horticultural Science, demonstrated a new way of introducing the Cas9 protein and guiding RNA into plant cells, which does not involve foreign DNA.

“This was the first time anyone has come up with a method to deliver the Cas9 protein through lipofection into plant cells,” Liu said. “Our major achievement was to make that happen. Also, since many consumers prefer non-GMO specialty crops, this method delivers the Cas9 protein in a non-GMO manner.”

Lipofection is a method that uses positively charged lipids, somewhat like those found in dish soap, to form a bubble-like liposome surrounding the Cas9/gRNA complex. The liposome binds to and then fuses with the plant cellular membrane, introducing its CRISPR cargo into the plant cell. It has been successfully used to deliver the CRISPR/Cas9 protein complex into mammalian cells.

“Many programs worldwide are focusing on CRISPR/Cas9 DNA delivery,” Liu said. “There’s only a very limited amount of research focused on Cas9 protein delivery. But protein delivery has a lot of advantages.”

First of all, by delivering the Cas9 protein instead of the DNA sequence of Cas9, there is no transfer of specific DNA sequences from one species to another. The Cas9 protein lasts for three to five days and then is degraded. This reduces cutting at unwanted locations, called off-target cleavage, Liu said.

Also, the most common method of introducing DNA into plants is called Agrobacterium-mediated transformation. Agrobacterium is a group of bacteria that cause plant diseases. Scientists cannot control where the new DNA is added with this method, said Liu. Additionally, this method does not work for many elite varieties of crops that are very difficult to transform. Also, since the process introduces foreign DNA, the end product is a GMO.

On the other hand, introducing CRISPR/Cas9 in a liposome requires the removal of the tough outer wall of the plant cell. Plant cells without the cell wall are called protoplasts. Converting this protoplast into a shoot and then a whole plant requires a careful combination of plant hormones and nutrients. Methods for regenerating plants from protoplasts have been developed for more than 50 types of crops, including wheat, tomatoes, strawberries and tobacco, said Liu. However, the methods have not been worked out for every crop.

Liu is also working on a few other methods of introducing the Cas9 protein into plant cells that do not require removing the cell wall.

One of these methods uses nanoparticles to introduce the Cas9 protein into pollen grains. Then, when the pollen is used to fertilize a female flower, the pollen tube will introduce Cas9 into the ovule along with the sperm. Some percentage of the resulting seed will have the desired genetic edits produced by the CRISPR/Cas9 complex. Liu would like to use this method to introduce Cas9 protein into tomato and hemp first and eventually adapt them to other sexually reproduced crops.

This research is funded by the USDA Agriculture and Food Research Initiative (AFRI) Agricultural Innovations through Genome Editing program.

Liu’s innovation has not gone unnoticed by his colleagues. Tom Ranney and Craig Yencho, professors in the Department of Horticultural Science, are among those who are collaborating with Liu to apply these non-GMO methods to advance beneficial traits in nursery crops and sweetpotatoes, respectively.

“Developing these systems for other specialty crops, including nursery crops and sweetpotatoes would be game-changing,” Ranney said.

Ranney and Liu have received a grant from the USDA-Agricultural Research Service Fruit, Nut, Sugarcane and Nursery Crops program to develop non-GMO methods for gene editing in nursery crops.

Liu began this project as a postdoctoral scholar in the laboratory of Charles Neal Stewart, an NC State alum of Horticultural Science, at the University of Tennessee. The Advance Research Projects Agency-Energy (ARPA-E), Thermo Fisher and the BioEnergy Science Center (BESC) supported the research. 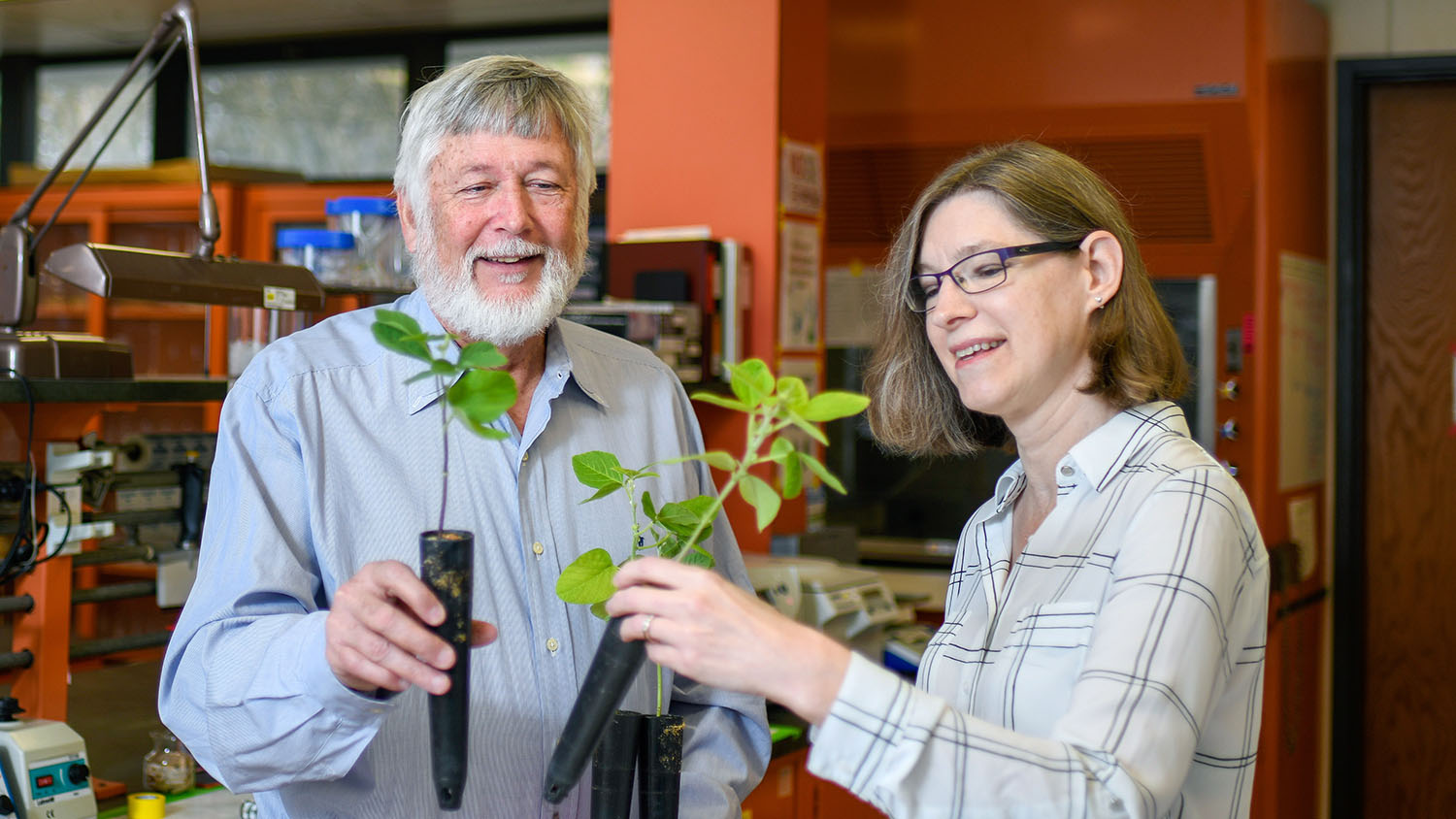