At NC State, Mark Watson’s schedule remains fairly filled with his three majors: Horticulture Science, Crop and Soil Science, and Spanish Language and Literature. Yet, when Summer 2018 rolled around, he had his sight set on pursuing a 12 week-long research experience at the Centro Internacional de la Papa (CIP) or International Potato Center. During his time at CIP, Mark carried out a wide range of duties starting with preparing samples to carrying out chemical analyses. 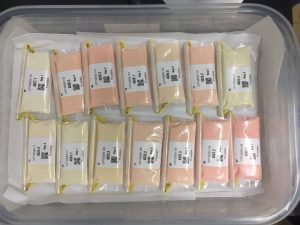 Mark has had previous research experience, he mentioned how the research experience at CIP provided him with an appreciation for all types of tasks involved in research. For example, one of the first tasks he learnt and had to carry out at CIP was to prepare samples, in other words, clean and peel potatoes. He emphasized how he now has more appreciation for preliminary tasks that end up having major impact on the actual research outcome. Additionally such training has rendered Mark to be an excellent potato peeler for non-research purposes as well! He mentioned he had to clean and peel the potatoes in a certain way to ensure that is no contamination from the soil on which they were grown, so as to not affect the final research outcome when he was measuring iron and zinc concentration, for example. In his words, “It was the most important part because if they had gotten potatoes with soil on it, even if you are as careful as you can be in the later stages, it will still be a gigantic error”. Mark also mentioned it was humbling for him to realize “How such procedures are created by actual people and do not just appear on paper”.

Having conducted experiments for both class work and for research purposes, Mark realized he definitely liked working in the lab for research purposes more than just for class work. He mentioned the difference in pace between lab work for classes which tend to get rushed to squeeze in a certain amount of content into a strict timeline as opposed to having more time during an experience to conduct various experiments. He was involved in an technique called NIRS for which CIP had almost 3,000 samples, but obviously there was no looming semester deadline. So, such experiments can be done at a more comfortable pace. 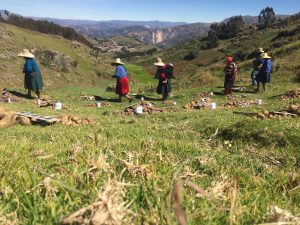 During his time at CIP Mark had the chance to experience the extension side of agriculture for the first time. He went on a trip to La Libertad where CIP was holding one type of demonstration for local farmers, which comes after the potato breeding. By that time, the farmers had already harvested the potatoes they had grown that season. During the exercise, local farmers and their wives there had to write down what kind of traits they wanted to see in the potatoes they farmed or ate. Then, they had to vote for the potato they preferred for farming. However casual it may seem, this is actually based on a strict protocol and a process called Participatory Variety Selection used and developed by CIP. It was exciting for Mark to see how CIP not only conducts research, but also makes sure that the varieties they are developing are actually adopted by farmers for mass production and making a real impact on people. 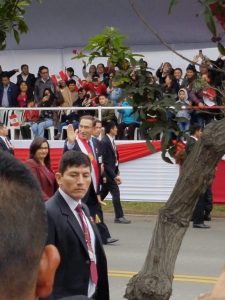 It was not all work and no play for Mark during these 12 weeks. He got the chance to taste a lot of authentic Peruvian food with his colleagues who would often bring dishes to celebrate team members’ birthdays. He also got to venture out of Lima by conducting field work in La Libertad and San Ramón, which offered a contrasting scenery compared to the hustle and bustle of Peru. He also got to enjoy other cultural activities such as Desfile Militar (Peru’s national military parade) during their National Celebrations lasting two days in July. He even got his picture taken with the President Martín Vizcarra during the parade, albeit from a safe distance!

One of the most important lessons learnt from this experience for Mark was being able to significantly improve his Spanish and he would love to work in other Spanish speaking countries in the future. Getting the chance to work in a lab in Peru, he got a newfound appreciation for people from different cultures and being able to interact with them at a personal level.

For any student who is interested in pursuing this experience for next summer, Mark recommends honing their Spanish speaking skills enough to have a simple conversation, but he also stresses that one could still get by without being highly proficient. One skill Mark pointed out that students do not need to have in order to complete the experience 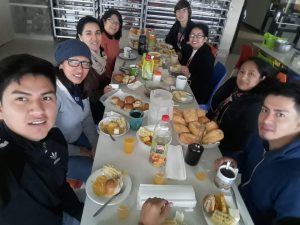 is a ton of prior research experience or knowing in depth about plants. He elaborated that the way the program is set up, interns start at a basic level, e.g., learning how to peel potatoes and then move onto the more complex chemical analyses, so that interns get the chance to ease into the program while learning along the way. However, Mark believes it is more important to bring in the right type of attitude and willingness to be adventurous with food are crucial for successful completion of the program. You can get a week-by-week account of Mark’s Peruvian adventure on our Research Pack Abroad blogposts. If you think you’re the right person for this experience program, keep your eyes peeled on our site for updates about Summer 2019 program.

Bayer, BASF, SAS and Novozymes have agreed to collaborate with NC State University researchers at the new Plant Sciences Building, a leading-edge facility at the heart of the university’s N.C. Plant Sciences Initiative.