Following a recent fruitful Bosnia and Herzegovina trip made by Dr. Vivek Fellner and Dr. Peter Ojiambo, José Cisneros—the Director of CALS International Programs—visited the country in late July. The objective of this trip was to evaluate the bigger picture and strategize a mutually beneficial collaboration between NC State and Bosnia. 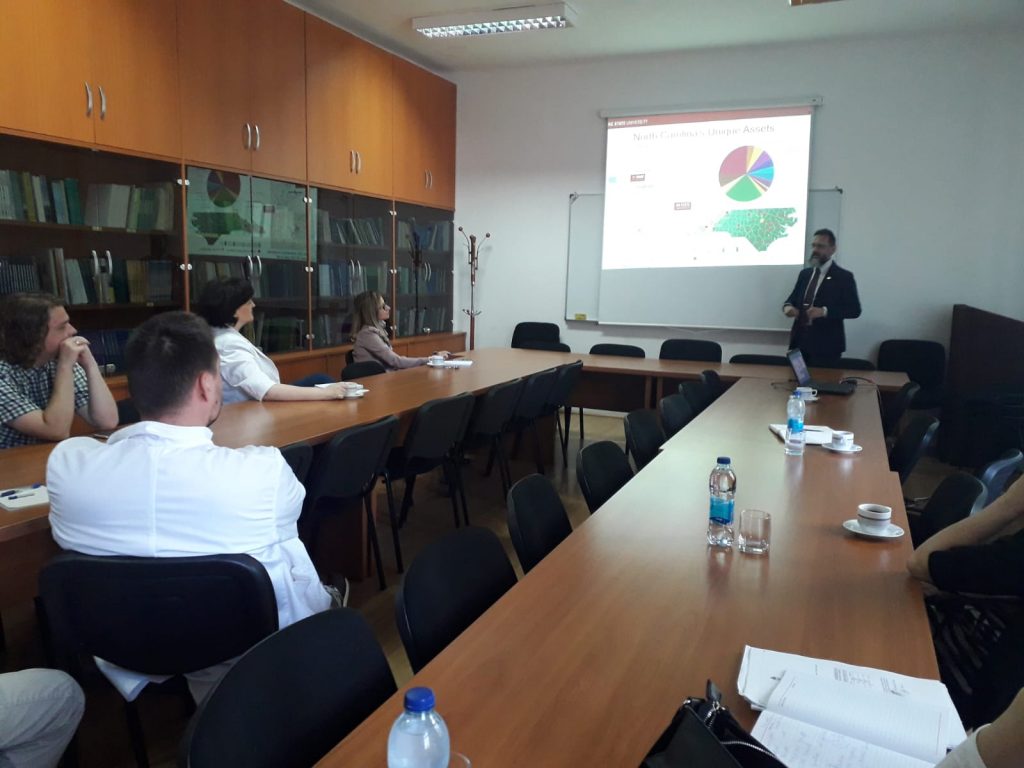 While in Bosnia, Cisneros had the opportunity to visit three universities – University of Banja Luka, University of Sarajevo, and University of East Sarajevo. University of Banja Luka has a Center of Biodiversity whose Director expressed interest in collaborating for breeding of hops and medicinal herbs, as well as the potential commercialization of new varieties that could emerge from this collaboration. University of East Sarajevo has new scientific equipment and would like NC State to train their faculty and staff on proper usage and handling of the equipment. Faculty in all three universities were all very enthusiastic, as reflected by their participation in the seminars and meetings held with Cisneros, in trying to identify possibilities of impactful research.

The trip included a visit to the Ministry of Agriculture, Forestry, and Water Management where the officials discussed about establishing a pilot agriculture extension system in their country, as well as to the Ministry of Science and Technology where the officials discussed scientific priorities of the country and discussed potential funding sources. Finally, Cisneros also met with the United States Agency for International Development (USAID) Mission located in Bosnia. 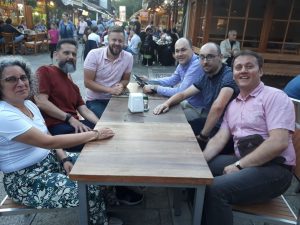 Going on this trip also meant a chance to meet old acquaintances. Last year, CALS Global Academy hosted a group of Bosnian fellows for a training on resilient agriculture at NC State through a USDA-FAS funded Cochran Program. One of the Cochran fellows, Sabrija Cadro, who is a Senior Assistant at the University of Sarajevo, along with the Vice Provost of International Engagement met with Cisneros. Another Cochran fellow Miljan Erbez—working at the Ministry of Agriculture, Forestry and Water Management in Banja Luka—visited the National Dairy Association and local farms with Cisneros. Additionally, Cisneros also had the chance to meet with the other fellows in informal social settings. 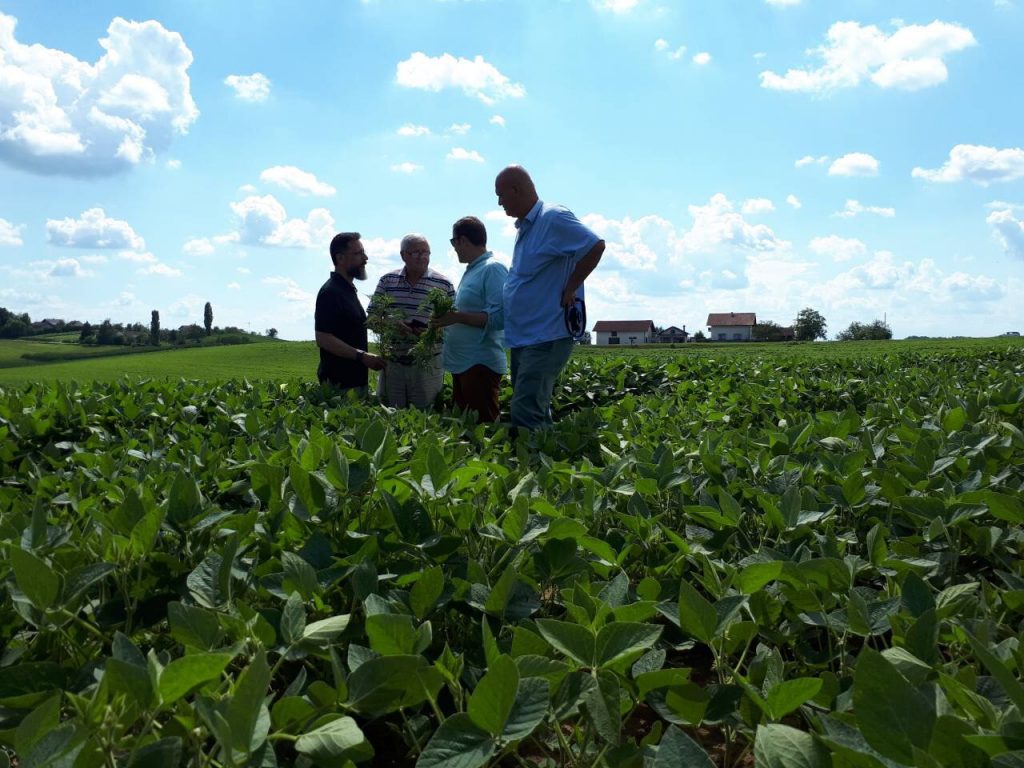 The discussions held with various parties in Bosnia revolved around five themes: dairy and swine production, hops production, medicinal herbs, soil classification, and finally student and faculty exchange. With regards to the dairy sector, Bosnia currently produces only fresh cheese and imports all of its fermented and aged cheese products. So, they are interested in developing aged/fermented cheese products for internal consumption. The country is the center of origin for hops, so it naturally boasts a high level of diversity in the species and subspecies of hops found there. Additionally, Bosnia is a big producer and vibrant market for medicinal herbs. The NC State Plant and Human Health Institute can potentially collaborate with relevant stakeholders there to accomplish this goal. The scientists and policymakers there are keen to develop a new system better aligned with international as well as US standards  and would like NC State’s cooperation in this process. And finally, the universities are interested in establishing student and faculty exchange program and hosting lecture series to facilitate scientific knowledge sharing.

All of these potential collaborations are aligned with International Programs’ latest initiative titled CREdO. CREdO is an initiative aimed at Connecting Research, Education and Outreach (CREdO) within the agricultural and food sectors. This initiative aims to increase agricultural innovation in Andean, Balkan, and East African regions through multidisciplinary and inter-institutional basic and applied research. This is done through technical, scientific and leadership training programs, as well as through workshops focused on key topics important for the growth and development of the country in question.

Although the potential collaboration list sound daunting, Cisneros remains optimistic about the prospect of accomplishing them, owing to the untapped potential of the country. Bosnia is a beautiful country boasting a bounty of resources that can be harnessed for entrepreneurial and agricultural development including new market expansion. While the European Union (EU) remains a large market, the whole Adriatic region also offers a thriving market thanks to a burgeoning tourism sector. The abundance of high quality soil and water can make rapid agricultural development possible with existing road-systems meeting the transportation demands by connecting producers to markets. But before any of that can happen, the Director believes Bosnia also needs to develop a robust water management plan so as to retain the water quality and maintain its usefulness for various types of usage.

These areas of collaboration are also in line with the five core strategic themes of CALS, namely: (i) Enhancing the production, quality, accessibility and profitability of food, plant, animal and bioenergy products for North Carolina, the nation and the world; (ii) Ensuring environmental stewardship and sustainability of air, land, soil and water resources; (iii) Creating a food supply that is safe, secure, healthy, affordable and of high quality; (iv) Improving human health and well-being for individuals, families and communities; and (v) Preparing students and stakeholders for leadership and success in the global workforce. 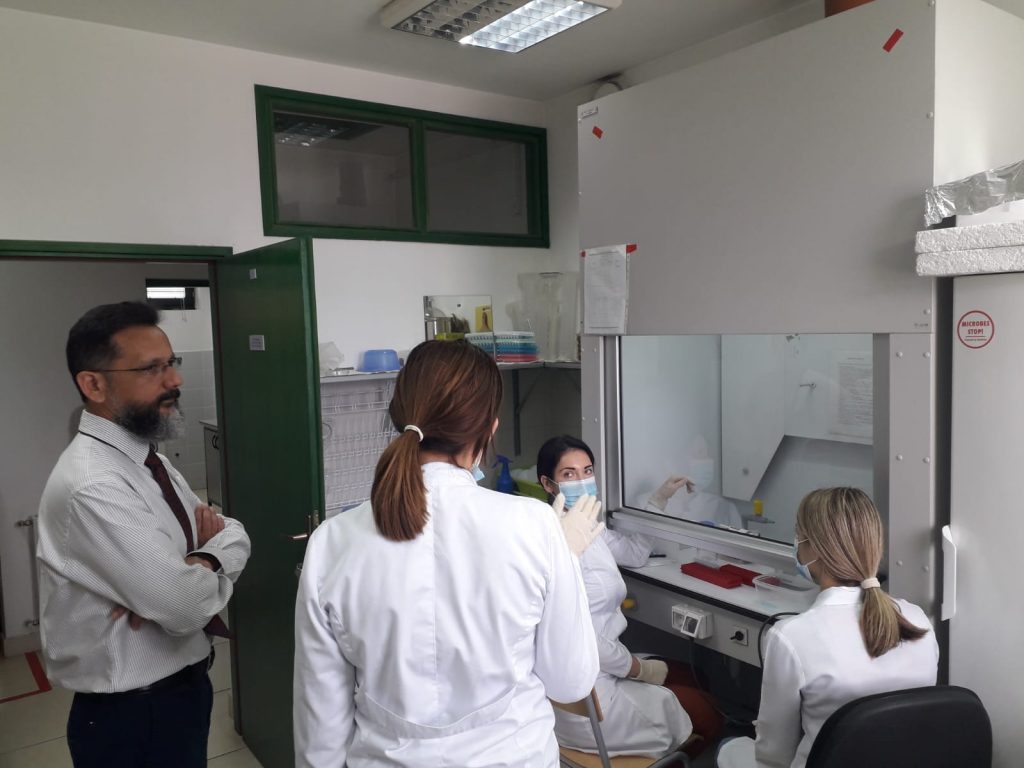 The country’s open-mindedness in establishing a partnership between NCSU and other universities is crucial for securing funding for future projects from various sources. Cisneros believes that such partnership could prove to be economically beneficial for both parties. By establishing a hops breeding program, both Bosnia and North Carolina could have access to high quality hops. Those high quality hops in turn could benefit the craft beer production in Bosnia and North Carolina, both of which boasts huge internal market demand for craft beer.

Interest from their key policymakers is likely to work as a positive impetus for this partnership. Specifically the Bosnian  Minister of Science and Technology is interested in developing partnerships among NC State and different Bosnian universities for developing and submitting joint proposals, while the Minister of Agriculture is interested in building a pilot program for establishing an agriculture extension system. For these initiatives to materialize, scientists from both countries need to engage in discussions to identify priority areas for research that can have strong impacts in Bosnia and Herzegovina. Once such research priorities are identified, the universities can approach funding agencies to pursue specific initiatives.

On the role of CALS International Programs Office Cisneros elaborated “CALS International Programs Office is well positioned to play a key role in maintaining this important partnership by working as the ‘matchmaker’. The office can facilitate logistics required to implement these initiatives as well as aid in identifying and securing funding opportunities. Such facilitation will provide opportunities to CALS faculty members to engage in this important international collaboration while the International Programs Office carries out a coordinated effort for the whole college.” Given the climate variation in Bosnia and the scope of the work, a diverse group of faculty members can be brought under the umbrella of this project, furthering the reputation of this college as an international leader in the field of agriculture. By strategically working closely with multiple stakeholders in the country, Cisneros believes CALS is poised to have a lasting and meaningful impact in Bosnia and Herzegovina.

Global Academy at CALS International Programs hosted a group of six professional from Turkey from July 23 to August 05, 2022 for a training program titled Overview of Enzyme Regulation

Renee Long, an undergraduate student in the Department of Crop and Soil Sciences and CALS International Programs employee, traveled to Valencia, Spain, this summer with the Sustainable Entrepreneurship study abroad program.