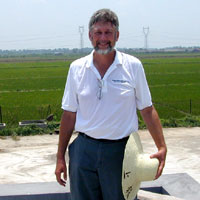 Dr. Carter’s research mission is to provide innovative genetic solutions that help improve the nations’ profitability in soy production. As a geneticist and breeder, Dr. Carter’s attack on the problem is to broaden genetic diversity in applied U.S. soybean breeding. In that regard, crop diversity is recognized as the foundation of breeding progress and at the same time perhaps the WEAKEST LINK in U.S. soybean breeding. Of the ~120 soybean breeders in the USA, Dr. Carter is one of only two (and the sole researcher in the southern USA) to devote his/her career to this issue.

Dr. Carter has released 8 cultivars and published more than 80 articles in peer reviewed journals. He also manages approximately 50 acres of field breeding, annually, in support of his diversity research and collaborates extensively with international scientists. Major applications of his work on diversity have been in the areas of drought tolerance and soyfoods.

As a part of his research program on genetic diversity, Dr. Carter summarized the relatedness of all publicly released varieties in North America. Published as a lengthy bulletin, this manual is an aid to breeders in the preservation of diversity in applied breeding programs. The computerized pedigree data base which he developed for this work is the most extensive available in soybean. Dr. Carter also discovered diversity patterns in U.S soybean breeding and estimated the diversity that had been lost through genetic drift. Dr. Carter collaborates with U.S. researchers to relate pedigree-based genetic diversity findings to MOLECULAR MARKER results and to breeding practices in industry.

He also collaborates extensively with breeders from China and Japan (the ancestral home of soybean) to characterize diversity present in Asian breeding programs and to apply that diversity to U.S. breeding.

The expansion of the Japanese SOYFOODS export market plus the U.S. public’s concern for diet and health have fueled new growth in the U.S. soyfoods industry. When Dr. Carter began work in this area in 1986, no specialty types were available to farmers of the deep south for export to the Japanese. Dr. Carter has developed 5 cultivars for use in this area.