The Dean’s Round Table: Facing The Future

Hey, you — where are we going?

In August 2017, CALS Dean Richard Linton gathered an interdisciplinary panel of CALS experts and partners — including our first grower to sit down to the round table — to talk about what they see up ahead. 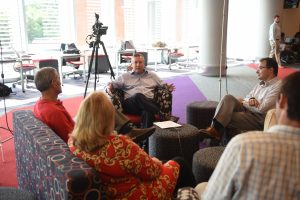 CALS Dean Richard Linton: Our conversation today is about what’s next — what is on the horizon for our state, nation and world? And how does CALS continue to lead the way in preparing students and transforming challenges into opportunities?

We’ll start with a very simple question: In a few words, what do you think is most important in preparing for the future?

Johanna Elsensohn: Expecting that more change is going to happen more and more quickly — we have to figure out ways to deal with uncertainty around those changes.

Mike Jones: I would say decision-making under uncertainty, at the university level and at the policy level, in the face of a rapidly changing environment.

Dewey Scott: As a producer, it’s being creative and willing to adapt to situations and deal with people on a more personal level.

Mario Ferruzzi: In the food space, it’s redefining “processing” and delivering optimal food and nutrition to the growing world population.

Pat Curtis: As a department head, we need to look at interdisciplinarity in undergraduates. Right now, we get tied to that “four years” number, that we’ve got to get them out in this certain length of time, and it becomes a rush.

Harry Daniels: For me, there are two words: Risk, certainly, but also opportunity.

Linton: Harry, what’s your thinking on how climate will impact production of agricultural plants and animals in the future? 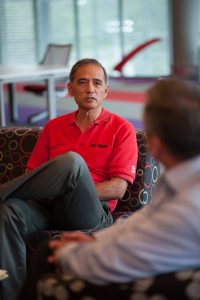 Daniels: For me, one of the main challenges in climate variability is water, whether drought or flooding. There was an article in the paper today about how cities in North Carolina will be impacted by the rising sea level.

Linton: Some of our most fertile and productive parts of the state.

Daniels: Right. And saltwater intrusion ruins the soil. There are areas in Hyde County where loblolly pines can no longer grow because of saltwater intrusion. That’s going to affect crops. Those are real impacts that are going to be happening very soon.

But at the same time, it’s a great opportunity for us to look at new cultivars. A few years ago, a group from France…talked about realizing they’re not going to be able to grow the same kinds of grapes they’ve grown historically, so they’ll have to bring in other varieties to make their wine. I think there are many other crops we’ll have to look at, too.

Linton: Speaking of crops — Dewey, you’ve made big changes over the years to become one of the most advanced processing and sorting operations for sweet potatoes in the world. What do you see around the corner? 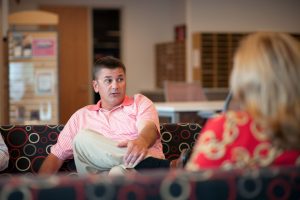 Scott: Our goal as producers is for everything that we build to have value. The difficulty is that the more we do as producers, the more difficult they make it. I just finished 20 piles of paperwork this morning. The box we can operate in gets smaller and smaller, and we spend our time being paper-pushers.

If we’re going to operate in the next generation — or even the next 20 years — the work that’s done at NC State has got to help us find something that allows us to continue to produce food at a reasonable cost.

Linton: Dewey presents a difficult challenge: Who is out there listening to our stakeholders? How do we take a proactive role? 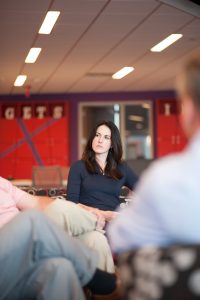 Elsensohn: As researchers, we need to be hearing from different people about these issues, and we also need to be advocates on Capitol Hill.

For the past two years, I’ve been a science policy fellow through the Entomological Society of America. I’ve talked with both congressional policymakers and executive offices like the State Department. One of the take-home messages has been very clear: They want and need more scientists in Washington. Information is not at their fingertips. They need us to be in contact, sharing our concerns.

Scott: As farmers, we know the issues we have, but sometimes they’re so difficult to explain that it’s hard for me to sit down in front of my representative and express myself accurately. So that’s where I think it’s very important that scientists and farmers work together as closely as can be.

Linton: Mario, I know you’re working on a big project with a new facility that’s going to be built in Kannapolis called the Food Processing Innovation Center. I think it’s the “what’s next” when it comes to new partnerships.

Ferruzzi: The partnership with the North Carolina Department of Agriculture is one big piece there, as well as engaging the broader food industry in adopting new technologies or improving processes, bringing research to a commercial scale.

Curtis: How do you plan to address the perception of processed food being bad? We’re facing those same issues in the poultry industry.

Ferruzzi: It’s a huge challenge. My fundamental answer is that scientists have lost the high ground in that discussion. I think it’s time to try to get some credibility back on the science side.

Linton: How should we present information so people can make informed decisions? 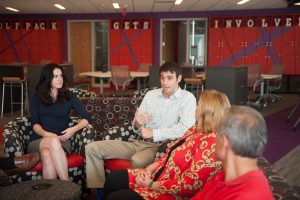 Jones: As a university, we can to help take the pulse of consumers and examine the diversity of their wants, needs and things they might reject. … It’s important not to be seen as explicitly advocating. I think presenting a variety of experts — and actually getting them in front of people — is key. Not relying, for example, on our journal publications to sway public opinion.

Elsensohn: Values are what drive consumer decision-making when either accepting or rejecting a new technology. … We need to have better mechanisms for feedback and finding alternatives.

Linton: Pat, you work closely with our industry partners. What are you hearing, and what’s next for the Prestage Department of Poultry Science? 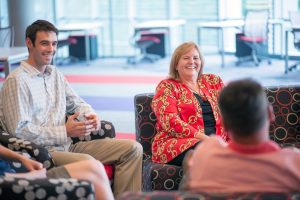 Curtis: I think we need to vision where the industry is going, and to move faster than the university has typically been known to move, so that we can meet the needs of our large, diverse poultry industry in North Carolina.

There are a lot of opportunities for growth there — it’s a global industry. And I’m not talking about just meeting the needs of one aspect of that industry, I’m talking farm to fork, everything from breeding and genetics all the way up to nutrition of products. There are only six poultry science departments left in the country. I would like to see NC State’s Prestage Department of Poultry Science be number one globally.

Linton: Fast forward to five or ten years from now. Our college has the goal of being top five in the country. A big piece of that is enhancing the student experience. What do you recommend we do in the future?

Jones: More programs that routinely expose graduate students to other people in other fields. I think bringing people together in teams to tackle real problems is crucial.

But the thing I didn’t hear that I think we all meant to say was: Urgency. We’ve got a short time to make a huge difference in agriculture. We know the challenges that are out there, and the biggest one is to almost double the food supply in the next 30 years. That’s only 30 growing seasons to figure it out. I hope that as we strengthen our effectiveness working with federal and state legislators and the public, that we’re effective so that sense of urgency can be realized. 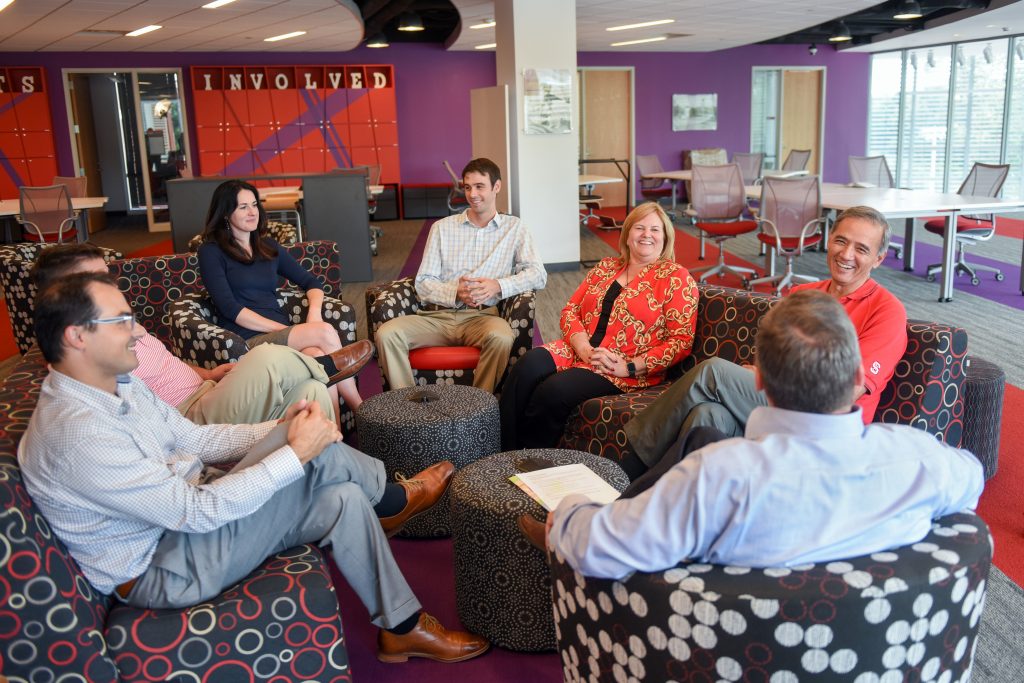