Peter Daniel: An Advocate for Agriculture and Public Service

To find a farmer in Peter Daniel’s lineage, you’d have to go back four generations. Still, his lack of farm experience didn’t keep him from becoming an important figure in North Carolina’s agricultural community.

Daniel served at the right hand of two of the state’s most prominent agricultural leaders: the late Jim Graham, who served for 40 years as agriculture commissioner, and Larry Wooten, who retired in 2019 as president of North Carolina’s largest agricultural organization, the North Carolina Farm Bureau.

Earlier this year, after working in agriculture for 44 years, Daniel became executive director of the North Carolina Association of Health Plans. But that doesn’t mean he’s stepped away from supporting his alma mater or caring for the state’s farm families.

As College of Agriculture and Life Sciences Dean Richard Linton said, Daniel has been “one of North Carolina agriculture’s best friends.”

Learning for a Lifetime

Daniel’s career had humble beginnings. He graduated in 1976 with a degree in business management, at that time associated with the College of Agriculture and Life Sciences. The United States was coming out of a deep recession marked by high unemployment and inflation.

“When I started studying for a business degree, you had more jobs than you had students. When I finished my degree, there were more students than there were jobs. And the Triangle area was particularly hit hard during the recession.”

He found entry-level jobs measuring emissions in the smokestacks of manufacturing buildings and helping in an NC State lab doing research on ultra-pasteurized milk.

I put on my three-piece cricketeer suit and my lace-up wing tips and went to work.

About a year later, he got what he calls his first “grown-up job” – directing purchasing for the N.C. Department of Agriculture and Consumer Services.

“I put on my three-piece cricketeer suit and my lace-up wing tips and went to work in the business office,” he recalls.

“I was telling all these department heads, who had been in their jobs 20, 30, and one even 40 years, that they can no longer do things they’ve been doing for their whole careers and bringing them under this new purchasing regime that state government decided to go to,” he says.

But Daniel was determined to support them when it came to dealing with the state purchasing office. From there, he says, he became involved in seeking additional funds for the agriculture department.

Mentored by a Master of Legislative Relations

It wasn’t long before others in the agriculture department noticed his leadership potential, and he stepped into the role of special assistant to Graham.

Driving the commissioner to appearances and events across the state, Daniel began to understand the art of politics.

“I learned scores of life lessons from him – how to treat people, how to be assertive,” Daniel says. “Of course, when you’re in the room or you’re in the car, you hear conversations and see how government policy is initiated and plays out. I equate my 20 years with Commissioner Graham as equivalent to a Harvard Ph.D. in politics.”

Daniel put those life lessons into action. He became a leader in his own right, influencing agricultural policy and becoming an important voice supporting farmers, their families and the rest of the farming community.

After Daniel had served NCDA&CS for 20 years, Farm Bureau leaders approached him about managing national legislative affairs for the organization.

In a meeting about the job with Bob Jenkins, then the organization’s president, and future president Larry Wooten, he said he wasn’t sure he had the right pedigree.

“Larry leaned in and looked over at me and said, ‘Peter, farmers don’t need you to know how to plow a straight row. They know how to do that. But they don’t know how to do what you do,’” Daniel recalls.

What Daniel knew was how to advocate for farmers with elected officials.

“That’s what convinced me that it was OK – that I could do the job,” Daniel says. “That’s how I ended up as national legislative director and then assistant to the president, and it has been a great ride.”

Agriculture has been through tremendous change and faced many policy issues, from public perceptions of animal agriculture and tobacco to rural economic development needs, and Daniel is proud of the role he played with the Farm Bureau in addressing those issues.

“In the 23 years I was there, we made a lot of difference in the lives of farmers and rural citizens in our state,” Daniel says. “It takes a team to accomplish great things. I shudder to think what would have happened if we hadn’t had a strong voice there for agriculture.”

The ag community needs an even stronger voice and a will to fund that voice.

Daniel’s pleased with how the Farm Bureau has helped farmers and agribusinesses get out front in what he calls “that marketplace of ideas about the issues that consumers care about,” helping the public understand agriculture and the challenges the industry faces in bringing essential food, fiber and fuel to the world.

“I think we’ve made a good start. I think there’s a lot of work left to do,” he adds. “The ag community needs an even stronger voice and a will to fund that voice.”

Daniel also believes in the value of having agricultural education, research and extension that strengthens agriculture and the communities and individuals who depend on it. That’s why he’s been a strong advocate for NC State and the College of Agriculture and Life Sciences.

And he was a strong advocate to provide resources for youth and leadership programs and instrumental in the Farm Bureau’s support of the North Carolina Plant Sciences Initiative (N.C. PSI). He advocated for the initiative’s inclusion in the Connect NC Bond referendum, and the Farm Bureau provided funding for the N.C. PSI launch director and the learning commons in the Plant Sciences Building that’s being constructed at NC State’s Centennial Campus.

On and on and on, we’ll need a pipeline of good young men and women from North Carolina farms who catch a vision for public service.

“Research has been what has kept North Carolina’s ag economy rolling, and research will keep it rolling. That, coupled with extension, and then being able to get students in to learn it,” Daniel says. “Teaching, extension and research are vitally important to the future of this state’s economy and to farming in North Carolina.”

Still, Daniel thinks that the university can do more to help prepare the next generation of local, state and national leaders who understand how government works and how to advocate for agriculture. That’s why he successfully pursued funding to support students with federal legislative internships and hopes to do the same at the state level.

“We need an endowed internship program here at NC State, where we can take good ag students that have an interest in learning about public policy that impacts their parents’ operations and will impact their future operations on a daily basis,” Daniel says. “On and on and on, we’ll need a pipeline of good young men and women from North Carolina farms who catch a vision for public service.”

Giving Credit Where Credit’s Due

Daniel attributes some of his success in public service to NC State, where hard work was essential to success.

“You had to put your nose to the grindstone and figure it out,” he says.

Daniel also makes a point of mentioning the role of his faith.

I’ve never had my eye on what’s next. My eye has been on what I’ve been given to do.

“Thats the cornerstone, the foundation of everything that I do, because I want to live my life in service to the King. He has opened doors and created pathways for me that I can say I never knew I qualified for or even existed.

“For each task at hand, I’ve tried to do it to the best of my ability without looking for the next stage,” Daniel adds. “I’ve never had my eye on what’s next. My eye has been on what I’ve been given to do and doing it to the very best of my ability. That’s been sort of my North Star in navigating my career.”

Finally, Daniel has a deep feeling of gratitude and credits the mentors and leaders who’ve helped open doors for him.

“If you see a turtle on top of a fence post,” Daniel says, “he didn’t get there by himself.” 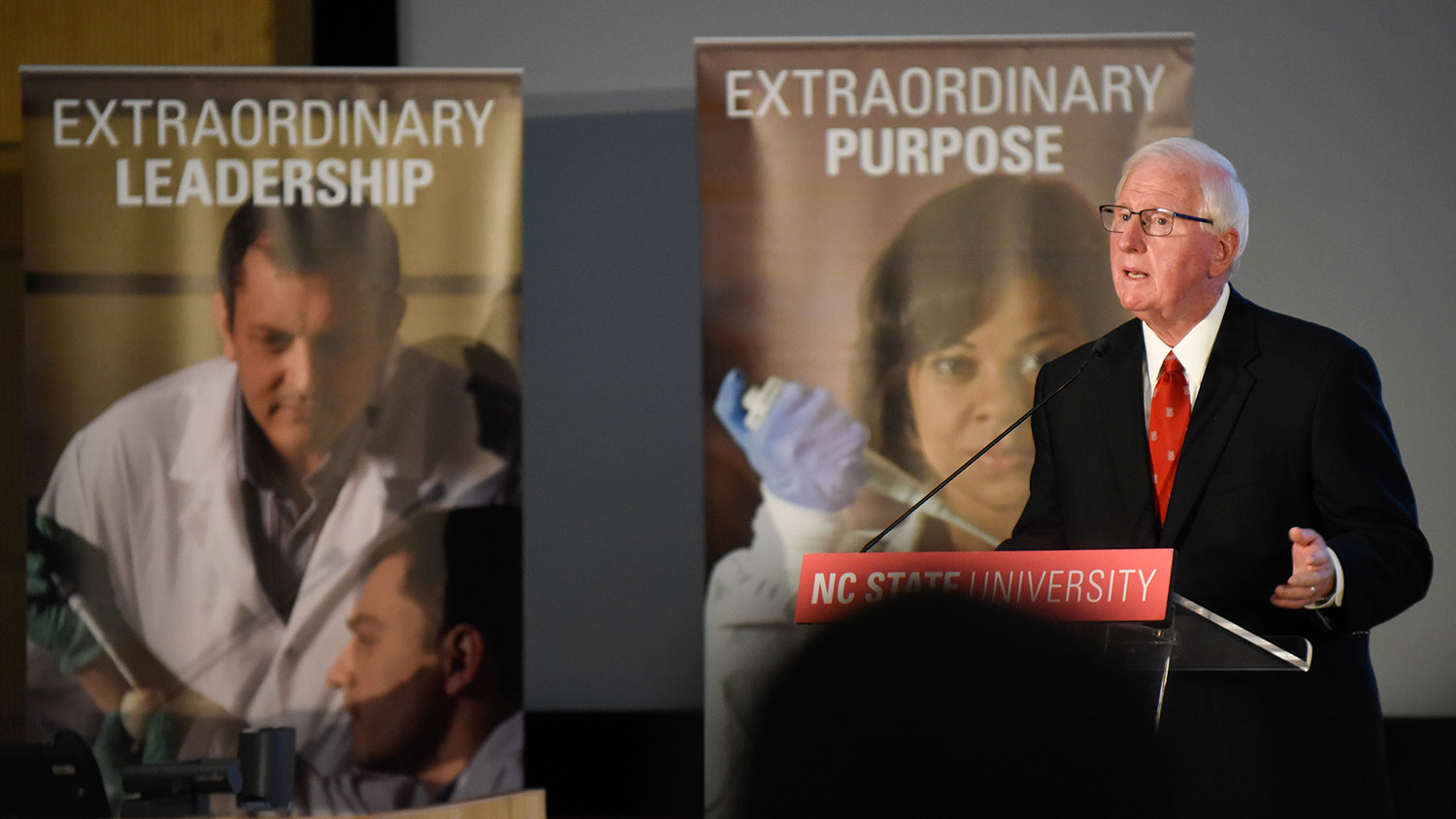 CALS alumnus Larry Wooten has wrapped up his career at the North Carolina Farm Bureau’s helm, but he promises he’ll continue to be involved in advocacy.