An Innovative Approach With Existing Technology

We’ve all heard the phrase “using what you have” or “making the most of what you have.” That’s exactly what NC State’s Jonathan Holt and Sierra Young are doing as they work together to better predict weight in pigs.

Holt, an assistant professor and extension swine specialist in the Department of Animal Science, says the focus of his research is twofold: looking at ways to measure the wellbeing and welfare of swine while also looking at technologies to measure or increase the welfare of pigs.

“The other goal we have is to work with producers, both large and small, in North Carolina and help them solve everyday, practical problems that arise,” Holt says.

With a background in both civil engineering, agricultural and biosystems engineering and a current focus on using robotics and automation sensing technologies, Sierra Young, assistant professor in the Department of Biological and Agricultural Engineering with an Extension appointment, was the perfect colleague for Holt to collaborate with.

The beginning stages of the project began in Fall 2019. Holt was part of a team that held a symposium on Precision Agriculture and Data Analytics for Livestock, which was funded by the  Food Animal Initiative. Holt says there were five members on the team, including professors from the Prestage Department of Poultry Science, Department of Biological and Agricultural Engineering and the College of Veterinary Medicine.

“It was the first time that a symposium was held to look at all of these data collection methods, sensors across species. There’s a lot of that happening in crops or in dairy, but we wanted to bring all of the areas into one symposium, including human medicine, so that we could really open the door to what’s out there,” Holt says. 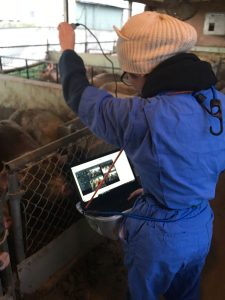 There are two phases to Holt and Young’s project. The first is the internal development of the stereo camera, an idea Young brought to the table. The camera is essentially two cameras side by side. Once an image is taken, the camera will allow them to resolve depth and distance and help with collecting physical measurements.

“If I take a picture of you right now with just a phone, you don’t know exactly how tall you are from one image. But if you have two images, and you know the intrinsic properties of the camera, you can actually start to resolve physical measurements in the data. This is a low-cost way to do that,” Young explains. She says they want to develop something that’s small and handheld that can be used in a mobile and quick way.

“I used this technology previously to look at estimating height and stem width and canopy density of sorghum for biofuels production. I’ve used it before in crops, not in animals, but the concept is similar,” Young says.

“It is really exciting because we’re taking a tool that’s used somewhere else and trying to apply it in a new way,” Holt says.

A Growing Need in the Pork Industry

After learning about the technologies there was an opportunity to help the National Pork Board as they were looking at ways to assess the market weight of pigs using image analysis.

Holt says it takes a lot of effort and time to bring scales in commercial facilities and weigh each animal. And the process of determining weight in swine is currently done subjectively, judging the animals and making the best guess as to whether a barn is ready to market. Holt says this can have some big consequences.

“If they’re too large, they’ll be penalized at the plant and not receive as much money for the pigs. If they’re too small, the same thing happens. They’re really trying to fit their pigs in a window of an acceptable market range to get the premium price for their pork,” Holt says. If pork farmers miss that narrow window, it costs them money.

The National Pork Board is funding the project. In addition to evaluating technologies already available in the marketplace, the funding will help Holt and Young develop their own method to estimate those weights.

Over the summer, the team plans to work with two of the largest pork producers in the world and integrate the technology. In the fall they plan to work with a third.

Holt says, “The mission of Extension is to take what we’ve learned on campus and bring it to producers to help them succeed every day. We can turn difficult ideas and hard science into applicable products for improving their production.”