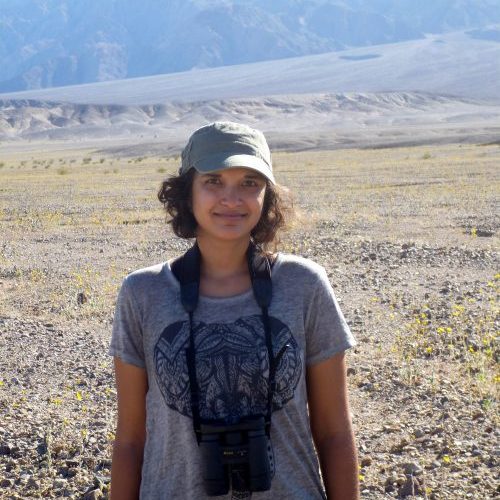 Overview: Climate change is exposing natural systems to novel climatic regimes and biotic interactions, altering natural selection, and disrupting local adaptation. Populations across the range of a species likely vary in their migratory and adaptive potential under climate change. Nevertheless, very few studies to-date have examined quantitative genetic variance in traits, adaptive potential, or the degree of plasticity across populations, nor has there been a robust effort to dissect the consequences of ignoring range-wide variation in these processes for the accuracy of models that forecast speciesâ€™ responses to future climate change. Most approaches aimed at predicting population persistence under climate change involve simplifying assumptions around plasticity, adaptation, and gene flow that are virtually always violated in natural systems. Here, we combine approaches from evolutionary biology, field ecology, and population genomics in a broadly distributed native plant species experiencing rapid environmental change (Chamaecrista fasciculata, Fabaceae) to forecast population dynamics range-wide under climate change. To evaluate genetic variation range-wide (Aim 1), we will first evaluate the migratory potential of populations under climate change using population genomic estimators of historical rates of gene flow. Gene flow could facilitate adaptive responses to climate change by redistributing adaptive alleles across populations and introducing alleles that confer thermal tolerance from low into high latitude populations. Population genomic studies will quantify variation in inbreeding, genetic drift, and genetic load in 60 populations across the range, which is crucial for predicting adaptive potential under climate change, especially in range-edge populations where deleterious mutations can accumulate. To estimate the adaptive potential of populations (Aim 2), proposed field studies will expose pedigreed lines from 12 populations across the range to contemporary conditions and simulated climate change in common gardens located in trailing edge, central, leading edge, and beyond-range sites. This range-wide manipulative experiment will: (a) evaluate if elevated temperatures reduce additive genetic variance in fitness, and test whether climate change diminishes adaptive potential to a greater extent in small than in large populations; (b) test key hypotheses about the consequences of climate change for population growth rates in different parts of the distribution; and (c) examine whether plasticity could buffer some populations from decline in the short-term. Finally, we will forecast range-wide eco-evolutionary dynamics under climate change using models that differ in the degree to which they incorporate data on species occurrence, quantitative genetic estimates for fitness in response to climate, trait expression under climate change, sequence variation, and gene flow (Aim 3). Intellectual merit: Genomic and quantitative genetic field studies will evaluate population-level variation in genetic diversity, rates of gene flow, phenotypic plasticity and additive genetic variance in traits and fitness. We will then integrate eco-evolutionary processes into models that predict range-wide fitness and occurrence as functions of climate, and contrast basic species distribution models with sophisticated models that incorporate empirical estimates of gene flow and data on trait and fitness responses to climatic variation from multiple common gardens. By comparing the predictive accuracy of alternative modeling approaches, we seek to identify the data required to forecast range-wide responses to climate change. The primary objective is to determine the type and amount of data necessary to generate robust and reliable predictions about range dynamics and adaptive potential, based on standard cross validation and independent validation approaches. Chamaecrista fasciculata is an exemplary case study to evaluate how and why alternative modeling approaches differ. This approach will generate robust forecasts of rang

Throughout history, humans have relied on understanding the evolution and ecology of plants, which form the basis of all life on Earth. Climate change is threatening plants across the planet. One way that plants can persist in the face of changing climate is by adapting to new conditions. Understanding the abilities of plant populations to adapt to environmental change can improve our ability to prioritize biological groups of conservation concern, forecast vulnerability to climate change, and predict the rate of spread of invasive species. This project focuses on the processes that facilitate or constrain adaptation to novel conditions such as those beyond species geographic range edges or those that have arisen due to climatic changes. Specifically, this work will examine rapid adaptation to climate change within multiple populations across the scarlet monkeyflowerÃƒÂ¢Ã¢â€šÂ¬Ã¢â€žÂ¢s (Mimulus cardinalis) geographic range. Aside from providing a comprehensive understanding of constraints to adaptation, this work will provide numerous training and mentoring opportunities for undergraduates, graduate students, and postdoctoral associates.