NC State researchers are working on perfecting a female-killing gene for one of the most destructive pests in the world.

In the remote jungles of the Panama-Colombia border, sterile flesh-eating flies fall from the sky in the thousands. Released from retired military planes, they embark on a suicide mission for their species, with the sole purpose of duping their female counterparts into mating with them despite their inability to bear offspring. Before this military-like operation became the norm, the New World Screwworm (Cochliomyia hominivorax or “man-eater”) cost livestock producers millions of dollars every year as a merciless parasite.

Without scientific intervention, the screwworm’s life cycle weaves a devastating tale fit for classic horror films of a bygone era. After a successful rendezvous with a male screwworm, the female screwworm spends her time drinking the sweet nectar of the forest. When she’s ready to lay her eggs, she emerges from the forest and into nearby farms and pastures on the hunt for a suitable host. Then she spots it: a blissfully grazing cow who just so happens to have a scratch on its head. She lands in the wound, lays her eggs and waits for another generation of screwworms to do its worst, which doesn’t take long.

This devilish pest has completely adapted to a parasitic lifestyle, with its eggs developing in a matter of hours at the precise body temperature of a poor unsuspecting cow. “They develop at 40 degrees Celsius, which is really hot for most insects. Most flies won’t develop well at that temperature. These do, and they’re very quick,” says Max Scott, Professor of Entomology at North Carolina State University’s Department of Entomology and Plant Pathology.

The New World Screwworm is technically a fly but is named as such because of the hooks it imparts in its victim’s flesh when screwing itself in from a preexisting wound, making way for other infestations and the animal’s eventual demise. In 2016, the residents of the Florida Keys started noticing native deer populations acting strangely, galloping past bus stops and through front yards in uncharacteristic hysteria with gaping wounds, exposed bone and infected flesh. The zombie deer of the Florida Keys, it was soon discovered, had been infected with the New World Screwworm. 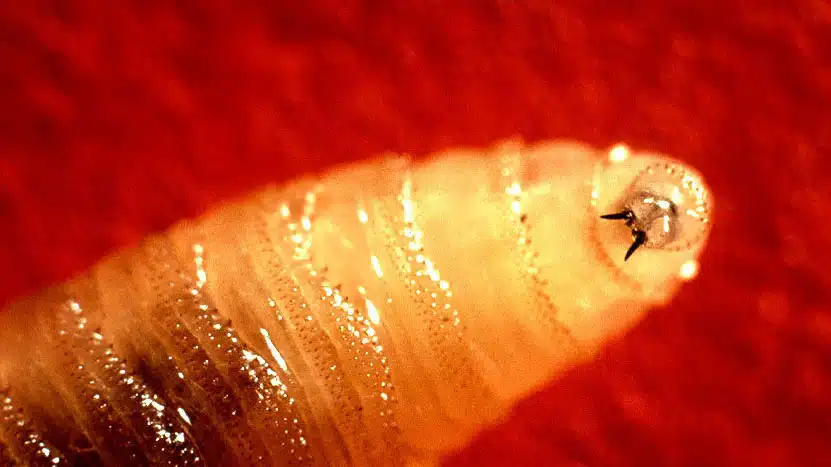 Listen in as Scott talks about Panamanian fly factories, entomological emergencies, and the case of the “zombie deer.”

As if zombie deer weren’t concerning enough, the real unease was aroused by the fact that this pest had been eradicated from the U.S. more than 60 years ago in an elaborate but necessary international effort. What began in the eastern U.S. by releasing sterile screwworms into the ecosystem spread further west and south to narrower and narrower international borders until eventually resting at its current screwworm frontline: the 200-mile-long Panama-Colombia border.

Today, millions of screwworms are bred every week in a lab in Panama City, enjoying catered meals of dried blood, milk and eggs. “The current practice is to release males and females that are treated with really high doses of radiation to ensure that the females are 100% sterile,” says Scott. Because males are not blood-feeders and therefore do not pose a risk to livestock, it’s the egg-laying females we have to worry about. So what if the lady screwworms could be wiped out altogether? It sounds like a plot just sinister enough to work and the clever scientists behind the scheme are nearly there.

Scott specializes in developing genetic systems for entomological applications and has been working with a team of researchers from USDA Animal and Plant Health Inspection Service (APHIS), USDA Agricultural Research Service (ARS) and the Commission for the Eradication and Prevention of Screwworm (COPEG). Together, they have developed a genetic system for the screwworm that selects only for male offspring. In other words, they’ve developed a female-killing gene.

Despite this groundbreaking finding, those managing the eradication program in Panama have not yet deployed these female-killing soldiers to the battlefield. They produce as many eggs and live as long, but according to Scott, the strain still isn’t perfect yet. His transgenic system has yet to produce males who are as strong as their wild brethren. “I’m not sure why, but the females are discriminating at the moment. When given a choice, they still choose a wild type male a majority of the time,” Scott says.

Should he find the perfect strain, Scott’s female-killing screwworms could provide significant benefits over the current process. By only producing males, the program could breed a fourth of the screwworms they currently do and still achieve the same level of population suppression. That saves on space, personnel, food, equipment and security costs.

Because the current program breeds males and females to maturity before radiating them for sterilization prior to release, Scott’s males with the female-killing gene pose less of a security risk should one escape the lab. Reducing biosecurity personnel could also save over $135,000 per year. In fact, with Scott’s gene system, the screwworms would have no need for radiation to begin with, potentially eliminating another $468,000 per year from the program’s operating costs.

All told, deploying female-killing male screwworms along the Panama-Colombia border could save the program more than $1.4 million every year. These estimated cost savings significantly reduce the barriers to entry and ongoing operating costs that prevent some countries ravaged by screwworms from participating in their own eradication programs.

Uruguay, for example, is plagued with huge screwworm populations but shares a large border with Brazil and Argentina, which makes eradication difficult and expensive. The cost and relative inefficiency of the current system is prohibitive for Uruguay and many other countries like it. But with funding from Uruguay from the Institut Pasteur at Montevideo, two postdoctoral researchers from Uruguay were able to assist in Scott’s lab for a year. They worked on developing a new CRISPR-based system that could control the pest even more efficiently than the current system.

Scott and his team’s research has the potential to prevent monetary losses for farmers around the world, not to mention saving innocent cows from having their brains eaten by maggots. If we’re lucky, or rather if Scott and his team can breed the perfect strain, lady-killer flies may be dive-bombing tropical forests all over South America before we know it.

Max Scott is a co-editor of the second edition of Transgenic Insects: Techniques and Applications, published online on October 28 and available in print on October 31. Chapter 17 includes a deeper dive into his work on the New World Screwworm.