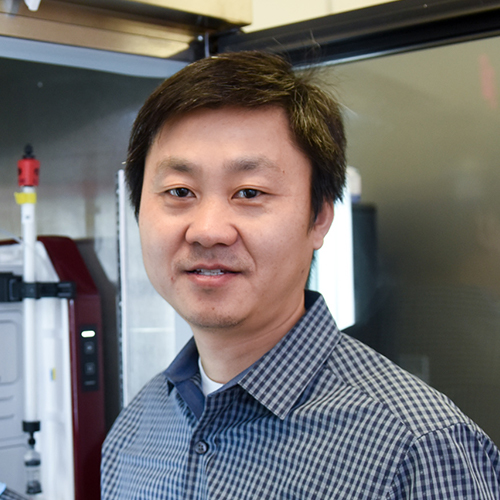 Research in our lab focuses on structural and mechanistic studies of protein kinases in various biological processes. Protein kinases are major signal transmitters in eukaryotic cells. There are 518 protein kinases in the Human genome, comprising about 2% of all genes. They are classified into mainly two types of protein kinases, membrane integral receptor kinases and intracellular kinases. The membrane integral receptor kinases function to receive extracellular signals and transmit them across the plasma membrane into the cells, while many intracellular kinases function to relay and amplify the signals in the cells. We chose the Leucine-Rich Repeats Receptor Kinases as an example to understand the general mechanism of ligand-induced receptor kinase activation, and investigate the activation mechanism of IkB kinase to understand the role of intracellular signalling kinases in signal transduction.

Inhibitor of κB kinase (IKK) controls the activation of nuclear factor (NF)-κB transcription factors, which are the master regulators of a wide variety of cellular processes, particularly immune and inflammatory responses. Dysregulation of the IKK/NF-κB pathway is associated with numerous diseases such as diabetes and cancer, inflammatory and autoimmune diseases; therefore IKK has become an attractive drug target for the treatment of these common human diseases. However incomplete understanding of the structure, mechanisms of activation and substrate catalysis of IKK has severely hampered inventing additional novel strategies as well as improving current strategies to target IKK for disease treatment.

IKK is a large protein complex containing the kinase subunits IKKα and IKKβ, and the regulatory subunit NF-κB essential modifier (NEMO, also known as IKKγ). IKKβ accounts for the majority of the IκB kinase activity of IKK and plays a dominant role in the canonical NF-κB pathway in response to proinflammatory stimuli. IKKκ shares more than 50% sequence identity with IKKβ and plays an indispensable role in the non-canonical NF-κB pathway in response to a subset of NF-κB-induction stimuli. The activation of IKKβ entails interaction with NEMO, while NEMO is not required for IKKα activation in the non-canonical pathway. NEMO-mediated IKKβ oligomerization and subsequent trans-autophosphorylation have been shown to be crucial for IKK activation but the underlying molecular mechanism remains to be revealed.