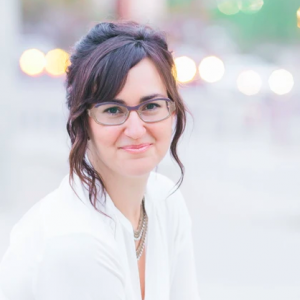 Athena Aktipis is an Associate Professor in the Psychology Department at Arizona State University, co-Director of the Human Generosity Project and Director of Human and Social Evolution and Vice President of The International Society for Evolution, Ecology and Cancer. She is also the host of the Science podcast, Zombified. Athena’s latest book, The Cheating Cell: How Evolution Helps Us Understand and Treat Cancer, goes back millions of years to examine the many ways that multicellular life-forms—from sponges and cacti to dogs and elephants—have evolved to keep “cheating” cancer cells under control. It then goes on to consider the ways in which we can improve the ways in which we treat and manage cancer based on evolutionary insights. Rob Dunn (RRD) sat down to interview Athena (AA) about cancer, her book, and the future.

RRD: Which kinds of cancers are most useful to think about from an evolutionary perspective?

AA: All cancers, really. Cancer is fundamentally an evolutionary process, and so evolution can help us understand how tumors change over time and why some tumors are easier to treat than others.

RRD: What sorts of things tend to favor cancer cells that are resistant to chemotherapy? What are the big factors?

AA: There are a lot of different ways for cancer cells to become resistant to chemotherapy. One big one is for them to upregulate what are called e-flux pumps. These are essentially little pumps on the outside of the cell that let them pump out toxins (like the chemicals used in chemotherapy) from inside the cell, making it easier for them to survive high doses of chemotherapy. Unfortunately the very process of treating a tumor often leads to selection for cells that are resistant to therapy, because cells without these mechanisms of resistance (like e-flux pumps) die, leaving only the resistant cells behind.

AA: Yes, exactly. The cancer cells that can survive therapy give rise to the next generation of cells in the tumor, and they pass along the genes that code for that resistance. But often resistance is also a matter of epigenetics – the gene expression state that the cell is in. And that epigenetic state can also get passed along when cells divide.

RRD: But sorry, you were saying…

AA: When we take this problem of the evolution of resistance really seriously, it can point us in the direction of new approaches to treatment. Some of the most exciting work going on in evolution and cancer is a new kind of therapy called ‘Adaptive Therapy,’ which aims to control the tumor rather than eradicate it. With this new approach, low doses of chemotherapy are used only when the tumor is growing, which doesn’t select for resistance and makes it possible to keep using the same drug to treat the tumor for a very long time.

RRD: Why does only using the chemotherapy when the tumor is growing prevent resistance from evolving?

RRD: What sorts of things tend to favor cancers that are metastatic and spread through the body?

AA: Metastasis is one of the biggest mysteries in cancer biology. There is no gene responsible for it, no molecular pathway to target; it is really hard to figure out why metastasis happens in the first place. Evolution and ecology can help, though.

AA: Well, we know, for example, that in many species that when they begin to use up their resources they often disperse. This is the same in a tumor where the high metabolism of cancer cells leads them to deplete the local resources around them, favoring cells that can move, invade and look for more resources. Cooperation among cancer cells also probably helps them to survive the challenging process of metastasizing. I think this is one of the most exciting areas of work in cancer biology, because if we can figure out how cancer cells are cooperating during metastasis, we can try to interfere with that cooperation to prevent or treat metastatic cancer.

RRD: Do you think of cancers as being part of the body or as something foreign to it?

AA: All multicellular organisms are susceptible to cancer, because cells in our body can evolve to cheat – to take advantage of the cooperation that all of our cells are usually engaged in to make us viable. This means that our susceptibility to cancer is a fundamental part of being a multicellular life form. Cancer arises from the cells of our own body, but then it takes on new characteristics as it evolves. So it is something dangerous that comes from a mutated version of ourselves.

RRD: Can you trace the evolutionary history of cancer cells in a body? A sort of biblical who begat who within a person?

AA: Yes, cancer evolutionary biologists make phylogenetic trees that can show the evolutionary history of cancer cells in the body. By taking samples from different places in a tumor and then sequencing the genomes of many different cells, it is possible to reconstruct the overall ‘family tree’ of a tumor (and sometimes also the metastases).

RRD: What are the steps, whether it is three or seven or however many, to managing cancer while taking evolutionary theory into account?

RRD: What is the biggest barrier to managing cancer that way?

AA: I think the mentality of the ‘war on cancer’ is a big barrier. If people think the only way to deal with cancer is to eradicate it, then they might not consider long-term co-existence as even an option.

RRD: Are you going to put the companies that sell chemotherapy drugs out of business?

AA: Haha! I’m not in the business of putting anybody out of business. But I do think it is important to consider the economic incentives for drug development and clinical trials so that, as a society, we can allocate resources to those treatments and approaches that are most likely to save lives and preserve quality of life for cancer patients. I’m not convinced that the current systems we have really aligns those incentives.

RRD: That was a very political answer. Who is the closest to using these approaches clinically? Which doctors or hospitals should people be paying attention to?

AA: I’m part of a group at ASU called the Arizona Cancer Evolution Center, led by Carlo Maley. We collaborate with lots of different scientists and clinicians on our projects. For this project we’re working with Don Northfelt at Mayo and Karen Anderson at ASU.

RRD: Have we gotten cancer treatment all wrong in the past, or just partially wrong?

AA: Not all wrong – sometimes high dose therapy works, like in certain childhood cancers. It is just not always the right approach because it can make a tumor harder to treat by selecting for resistant cells.

RRD: Do cancer cells have division of labor like an ant colony? Are there “breeder” cells and “worker cells?”

AA: Great question! This is one of the really exciting areas for empirical work and modeling. There is some evidence for division of labor in tumors – like some cells seem to specialize in producing growth factors, while others specialize in protecting the tumor from the immune system. My colleagues and I have suggested that there might be a distinction between “breeder” and “worker” cells like you bring up – and we created a model that shows that this kind of division of labor would explain why tumors aren’t composed completely of ‘cancer stem cells’ (i.e., cancer cells that can give rise to a new tumor).

RRD: How does this play into treatment?

AA: Well, some therapies have focused on eliminating so-called ‘cancer stem cells,’ but it’s not as easy as it seems because that means that researchers have to find characteristics of these replicating cells that they can target, and these therapies also exert selection pressures on the population of cells. So it’s all quite literally a moving target.

RRD: In theory though, if you could knock out the queens you could destroy the colony (to make the analogy to ant colonies). More or less?

AA: Yes, but not if new ‘queens’ can pop up after you think you’ve destroyed them all. And we don’t know enough about the regulation of these ‘cancer stem cells’ to know exactly what these dynamics are. Basically, we don’t know what’s going on inside the tumor in terms of how these supposed ‘cancer stem cells’ arise, or even if they are really a thing. So it’s hard to build therapy around the idea of them when we don’t know how they work.

RRD: Do the immune systems of some species have the ability to deal with cancer cells so as to slow their evolution?

AA: Most multicellular organisms have sophisticated immune systems that can recognize and respond to cancer cells. Our immune system is essentially constantly surveilling our bodies for evidence of rouge cells and targeting them for destruction if they are detected. Usually when a patient comes to the clinic with cancer, the tumor cells have already evolved to escape from the immune system, like prey evolve ways of hiding from their predators like camouflage.

RRD: Are they subconsciously employing some of your ideas?

A Primer on Coronavirus, Variants, Mutation and Evolution

Erin McKenney tell us what she learned from participating in the Libraries' first Open Pedagogy Incubator.