Imagine sitting down to do your calculus homework – but not being able to use your hands.

Figure out in your head how to solve each complex equation, then explain to a stranger how to write it all down for you, step by step. Correctly. And then on to the next problem. And the next.

Finally finished? Good. Now dictate a term paper from your head. You will not be able to jot down notes or page back through the book for source material.

For Kelly Blanton, that was college.

Next up: combine those interdisciplinary majors to make the world a better place. 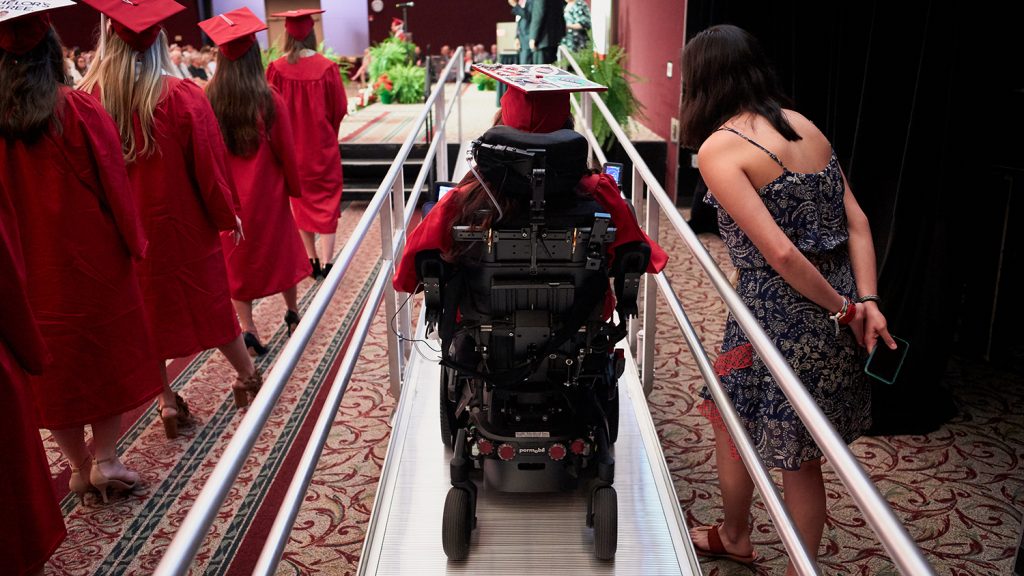 The Animal Science graduation ceremony in the McKimmon Center on May 12, 2018, is standing room only. The graduates are seated in the front few rows and called up in shifts. Kelly sits in her wheelchair at the end of a row with one of her closest friends, Reagan, who massages her arms and smooths her hair as they wait to go onstage.

“I would direct you to the final three words of the NC State song: Love and pride,” he says, as Reagan fans Kelly with a graduation program. “The love of the family and friends here with you today, and the pride you should have in yourselves for what you have accomplished.” 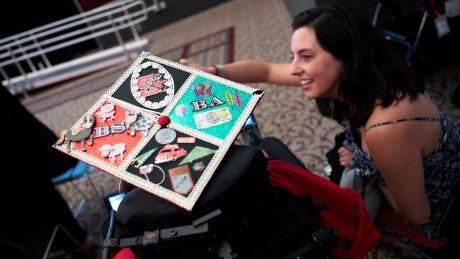 For Kelly, that love and pride includes both the fun of football games with friends and the challenge of dictating term papers and math homework to academic aides. It’s devising creative workarounds to make sure she could fully participate at both laboratory dissections and her shift at the dairy farm. It’s the lonely first semester staying in an accessible apartment with either her mother or a nursing aide while other students bonded in the freshman dormitories.

Kelly’s not a spectator, let’s put it that way.

NC State has been “as close to perfect as humanly possible” about accommodations, says Kelly’s mom, Geri Blanton. Professors worked with Kelly on modifications to meet her needs without easing up on academic requirements. Aides made sure she didn’t miss a note in class. Friends aligned schedules for spring break trips.

Visits from her mom, her nephews and niece, and her dog brightened her days and reminded her of home.

Most of all, though, it’s boiled down to Kelly herself. Getting to graduation has taken determination. It’s taken grace. And it’s taken a nearly unimaginable amount of hard work.

“I challenge you all to do one last thing,” Daniels finishes. “Go out and do all the great things we know you’re capable of doing.” 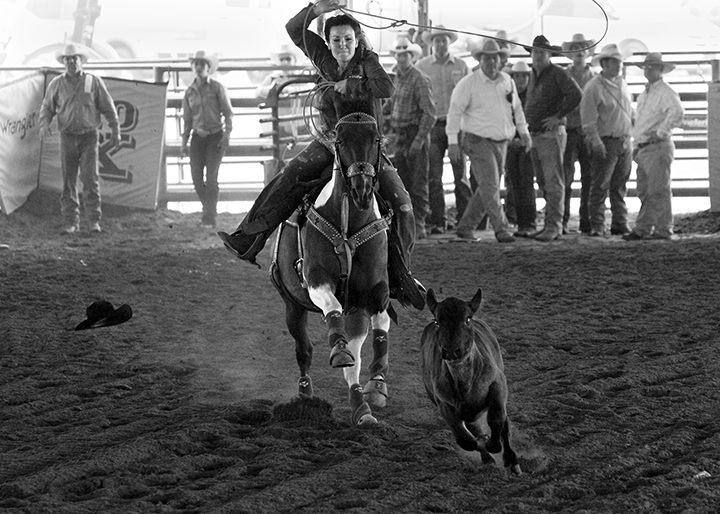 When Kelly was growing up in rural Taylorsville, North Carolina, she rarely held still. She played on the tennis team, the track team and the softball team.

“Kelly’s not a spectator, let’s put it that way,” her mom, Geri, says. 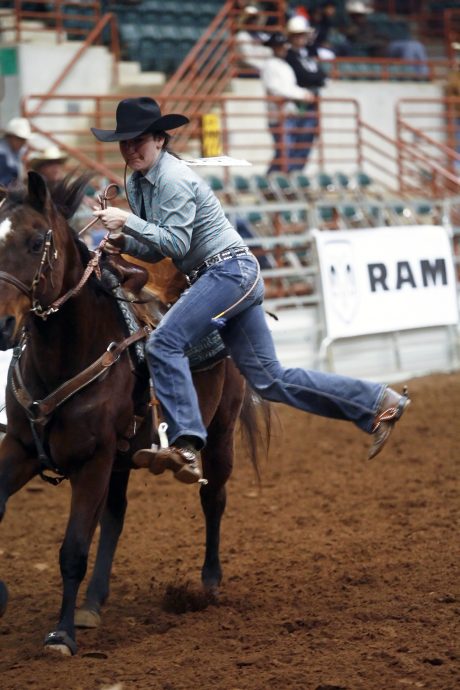 When her older brother started riding in rodeos when Kelly was in middle school, she insisted on following in his footsteps. She had always wanted to be a veterinarian, and here was a chance to combine her love of animals with her passion for athletics.

The 2011 International Finals Youth Rodeo in Shawnee, Oklahoma, was Kelly’s last scheduled competition as a breakaway roper before starting college classes. She’d been accepted to the Department of Animal Science at NC State starting that August.

On July 11, 2011, it was 113 degrees in Shawnee. Kelly was running late for practice and didn’t have time to warm up. All of the horses were keyed up in the heat.

I was gasping for air. That’s all I wanted.

“When I got ready to practice, he just started bucking,” Kelly says. “I knew I was going to come off.”

Her forehead hit the ground first. She lost all feeling and movement from the neck down.

“My main concern was that I couldn’t breathe,” Kelly says. “I was gasping for air, that’s all I wanted.”

The next two weeks in the trauma unit, she dipped in and out of consciousness. Due to the swelling, doctors couldn’t predict how recovery would – or wouldn’t – progress. They told her mother that Kelly would probably never be able to breathe without a ventilator. Geri would sit with her daughter all night, stroking her forehead and singing “You Are My Sunshine” and “Great Is Thy Faithfulness.”

Kelly was eventually airlifted to the Shepherd’s Center in Atlanta, which specializes in spinal cord injuries.

“They sit you down and tell you, ‘this is a marathon, definitely not a sprint,’” she recalls. “It was really hard to hear.” 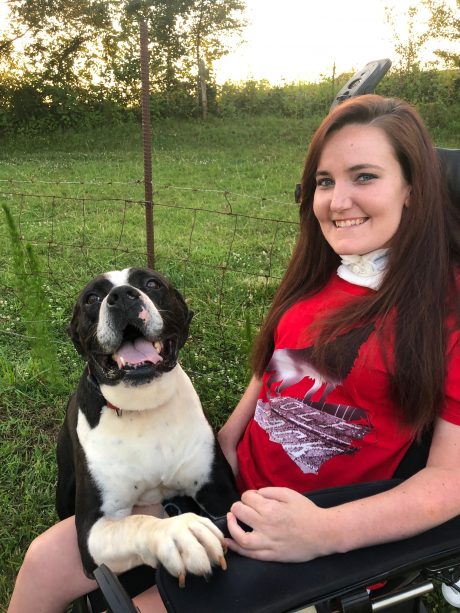 What followed was a grueling schedule of physical therapy and medical treatment. But two things that happened during that time would shape her calling for the future.

First, Kelly met with a mental health counselor. During a crushingly difficult time, her counselor acted as advisor and confidant. Their long conversations gave Kelly a crucial medicine she wasn’t finding in her other treatments: hope.

“After we talked a lot, I thought my life was being called somewhere else, to help others in need and others in similar situations to myself,” Kelly says. “I felt like if someone could help me feel that I had options in my situation, I’d like to be able to do that for someone else.”

Second, the center brought in therapy dogs. They would sit with patients during difficult physical therapy sessions and provide emotional support on bad days. It was Kelly’s first experience with animal-assisted therapy – a growing field, one with limited availability but proven results.

“Animals build a bridge,” says the University of Basel’s Karin Hediger, secretary of the International Society for Animal-Assisted Therapy. “They communicate directly but nonverbally, and they don’t judge.”

“That was a cry-fest,” Kelly says, “but they were happy tears. In the beginning, everything is emotional, because you’re trying to deal with a new normal.”

After four months of in-patient rehab in Atlanta, Kelly stabilized enough to head home and think about what was next. She could no longer fulfill the physical requirements of a veterinarian, but her experiences had given her a new idea for how to use her love of animals in the future.

In fall 2012, she signed up for two classes at her local community college as a test run for NC State: If she could figure out how to handle the coursework, she would re-submit her application to her dream school.

She got A’s in both classes, and was accepted to CALS for the second time. This time, she added an extra major: psychology.

The Animal Science curriculum is rigorous and emphasizes hands-on experience in real-world settings. By adding a second major, and one in the humanities, Kelly was choosing to double her coursework. But she knew that an interdisciplinary approach would strengthen her resume.

She dove right in.

“Kelly is indomitable. Irrespective of physical challenges, she is a force to reckon with,” says Shweta Trivedi, Kelly’s professor for Anatomy and Physiology sophomore year. “She is a role model for students who are disabled and want to do a science-intensive curriculum.”

For Anatomy and Physiology, Trivedi and Kelly worked out a system where a teacher’s aide acted as Kelly’s hands during dissections.

“I never held her to lower standards,” Trivedi says. “She wanted to be treated as any other student, and she came through.”

At the end of that semester, Kelly had the highest grades in the class.

“Kelly Can Help Lead The Way” 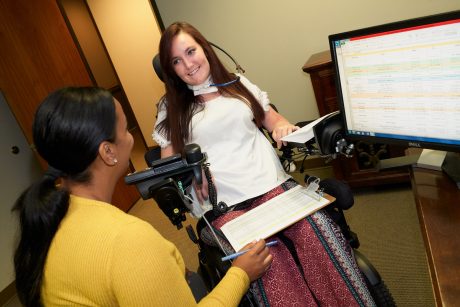 In her senior-year internship at RHA, an organization that provides support services for individuals with intellectual, physical and developmental disabilities or substance abuse challenges, Kelly was a liaison for client services. She worked with RHA after the accident, so she understands the system.

I realized that my mind and my voice are my independence.

“She’s been where these families are, so I think it’s a hope and encouragement for them to see how she’s navigated the system,” says her supervisor, Director of Case Management Services John Gibbons. “She can reach out and help advocate for others.”

After her internship ended, there was one final hurdle to cross – but she made it. Kelly was accepted to NC State’s graduate program in social work. She returns to campus in the fall.

Her long-term goal is to combine the two therapies that helped her so much during recovery: counseling and animal-assisted therapy. Involvement from students like Kelly is very important for the future of the field, Hediger says.

“Although availability is growing, it is sometimes still seen as ‘exotic’ and not very easy to get access,” Hediger says. “What we need is a growing professionalization, and it is important that the students get proper education.”

Those who know Kelly see her as perfect for the task.

“With the future headed towards animal therapy as part of pain management and emotional and mental wellbeing, disabled individuals can go through daily life in a richer way,” Trivedi says. “Kelly can help lead the way.”

Her long term physical prognosis is still uncertain; she still has very little movement capability below her shoulders, and remains reliant on a diaphragmatic pacing system to breathe. Another device allows her to direct her wheelchair with small movements of her tongue.

“I have hope that one day technology will advance, or that I’ll be healed, but I’m going to do the best I can with what I have right now,” Kelly says. “Talking to my counselor, I realized that my mind and my voice are my independence. And I can still use those to make my own future.”

Equal Opportunity = The Foundation For Success

The NC State Disability Resource Office offers help with eligibility, accommodations and assistive technology. They are located at 304 University College Commons, and online at dro.dasa.ncsu.edu 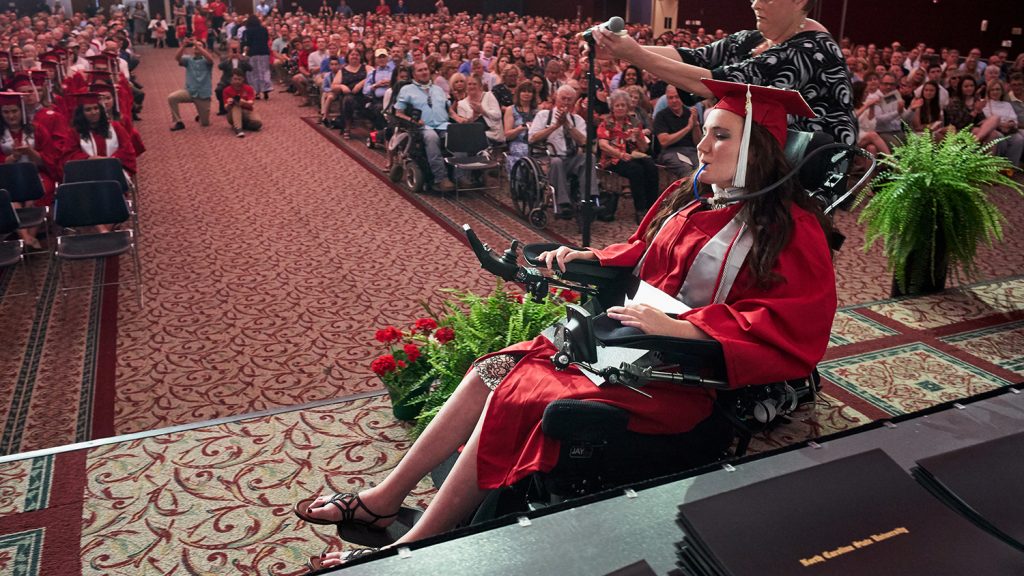 The North Carolina Plant Sciences Initiative has teamed up with technology leaders SAS and Microsoft to predict plant disease and tackle food recalls. Several research teams will use cloud and internet of things (IoT) services from SAS and Microsoft for their interdisciplinary projects.

Sweetpotatoes are North Carolina's state vegetable, and they're not just for Thanksgiving anymore. Find out how North Carolina growers have positioned our state as the leader when it comes to production of this increasingly in-demand crop.