For nearly as long as Lizzie Johnson Harrell can remember, she has been, in some form or fashion, a teacher – whether she was leading a make-believe classroom at home with some of her 12 brothers and sisters, instructing first-year medical school students, or serving as a mentor to emerging microbiologists. 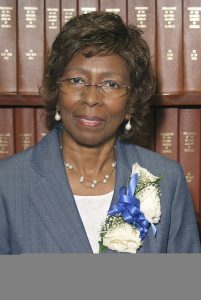 Harrell was a trailblazer at N.C. State as the first African-American to receive a Ph.D. in microbiology. She considers the instructing, guiding and mentoring she went on to do both locally and nationally to be the foremost contribution of her 33-year career at Duke University Medical Center – and a contribution she continues to make today.

She retired last fall as the associate director of the hospital’s Clinical Microbiology Laboratory. In December 2011, the Duke University Board of Trustees granted Harrell emeritus status; she is now Research Professor Emerita of Molecular Genetics and Microbiology.

Harrell remains involved as a mentor with the American Society for Microbiology. A Fellow of the society’s distinguished American Academy of Microbiology and a Diplomate of the American Board of Microbiology, Harrell helped establish a nationwide microbiology mentoring network several years ago, and she also informally advises scientists-to-be through local schools and universities in the Research Triangle and beyond.

Reaching out to others, she says, is something she learned from the numerous people who reached out to her over the years. When acknowledging those who have supported her efforts as a scientist, Harrell begins with her parents, who insisted she go to college. Always a curious child with an academic bent, Harrell left her hometown in Shallotte in 1961 to study biology at N.C. Central University in Durham.

It was there, in biology and chemistry classes, that she met Sampson Harrell, who would become her husband. After graduating, Lizzie served as a research technician in pharmaceutical research for DuPont in Newark, Del., where she analyzed specimens from animals that had been given experimental drugs.

Three years later, with Sampson studying medicine at the University of North Carolina at Chapel Hill, Harrell chose to enter graduate school there. And after earning a master’s degree in bacteriology and immunology, she followed her husband as he moved to Washington, D.C., for his medical residency. She went to work as research microbiologist at a Veterans Administration Hospital there from 1972 to 1974.

The couple then returned to North Carolina, and Lizzie soon enrolled as a Ph.D. student at N.C. State University. She earned her degree in 1978, working under Dr. Jim Evans, the late head of the College of Agriculture and Life Sciences’ Department of Microbiology, studying how anaerobic conditions affect antibiotics used to treat infectious Staphylococcus. Harrell acknowledges Evans as key in her development as a scientist. “Dr. Evans took me under his wings,” she recalls. “He was so gracious in guiding me.”

Upon graduation, Harrell went to work as a bench-level technologist in the Clinical Microbiology Laboratory at Duke University Medical Center. The laboratory plays a critical role in patient care at the hospital, responsible for detecting, isolating and identifying infectious microorganisms in patients’ samples, performing tests to determine the most effective antibiotics for treatment, and advising physicians on related issues.

Starting at the bench was, Harrell says, “the best thing that could have happened to me because I got all the basics. I really pride myself on having done that – on taking time to understand the organization and to know my field from the inside out.”

That experience, she believes, made her a better supervisor as she worked her way up to become assistant laboratory director in 1982 and associate director in 1998. The first full-time African-American faculty member in the basic science departments at Duke, Harrell also earned the rank of full professor in Molecular Genetics and Microbiology and in Pathology.

At Duke and among microbiologists, Harrell became known for her research on emerging antibiotic-resistant bacteria and for bringing molecular microbiology techniques into the Duke Clinical Microbiology Laboratory. In 1993, after having taken molecular microbiology courses at the Centers for Disease Control and Prevention in Atlanta, Harrell took a year-long sabbatical at the Durham VA hospital to get more in-depth knowledge and experience in examining DNA and RNA using such tools as the polymerase chain reaction and pulsed-field gel electrophoresis.

When she returned to Duke, she began introducing these new methods into the laboratory to detect infectious agents more rapidly, to measure the amount of virus in patients’ samples, and to discriminate between strains of pathogenic microbes.

The Molecular section soon became the fastest-growing section of the laboratory, and Harrell says that keeping up with discoveries in the burgeoning field and their applications to patient care has helped satisfy her scientific curiosity.

She has also enjoyed the range of ever-changing health challenges she’s been asked to help address, from respiratory and urinary tract infections to infections in organ transplant patients. She also was involved in detecting HIV and the novel N1N1 influenza virus.

“People sometimes look at me and say, ‘Thirty-three years – didn’t you get bored?’ And I say to them, ‘Never. Never a dull moment,’” she says. “There’s always a challenge to learn more and to apply newer methods in order to do the best for your patients.”

Likewise, Harrell is finding new challenges as a retiree. She’s spending more time with her three grandchildren, her son and daughter in-law; traveling with her husband; serving on a Federal Food and Drug Administration advisory committee; and continuing her involvement in the church and community.

“I will spend less time on science, but more time on other activities. However, anytime anybody mentions microbiology and science, I get excited,” she says. “I’ve been lucky to have had many mentors throughout my life —in high school, in elementary school and grad school — who’ve helped me get to this point. And I’m grateful for the support I’ve gotten from my immediate family and my in-laws.

“I feel like much was given to me,” she says, “and I feel like giving back to others.”