Houston, We Have Tomatoes

For more than two decades, CALS researchers have been working with NASA to develop food solutions for astronauts. The findings have implications not only for long-term space missions, but also for Earth-bound agriculture.

For humans to embark on long-term space missions, they will need plenty of food – not just food they can pack and carry with them, but food they can harvest from plants grown in space.

At CALS, much of the research effort has been basic scientific research focused on plant’s response to gravity, which in turn advances our understanding of how plants respond to stress. 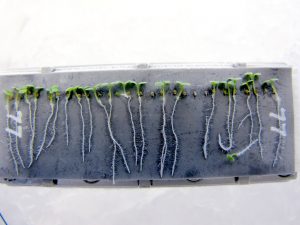 A major grant from NASA establishes a Specialized Center of Research and Training (NSCORT) in Plant Gravitational Biology and Genomics at NC State University. The center, which continues until 2003, supports work that results in 92 peer-reviewed journal articles.

NC State’s Chris Brown and Nina Allen organize a national science symposium on gravity. Wendy Boss reports on NC State research showing that oats and maize use the chemical inositol trisphosphate, or InsP3, to sense changes in their orientation with the respect to the gravity vector.

Transgenic tomato seeds from NC State travel on the Space Shuttle Endeavor to the International Space Station, where they were grown in chambers specifically designed for the challenges of the space environment. The seeds have been genetically altered to have reduced levels of InsP3. 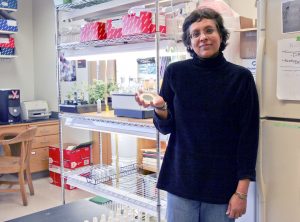 The final flight of NASA’s space shuttle program carries an NC State plant experiment to the space station. Astronauts grow the tiny seedlings of wild and genetically modified Arabidopsis plants for five days, then freeze them for post-flight analysis by Imara Perera. Perera, who had been a post-doctoral researcher in Boss’ lab, is now a research associate professor in the Department of Plant and Microbial Biology.

The Space X Dragon, the first commercial spacecraft in history to return cargo from the space station, carries Perera’s seedlings back to Earth, to be processed and subjected to next-generation sequencing. She continues to analyze data from the experiment to find out more about the molecular mechanisms plants use to sense and respond to changes in their environment.

“It will be fascinating to see not only what we learn when the plant signaling samples come in for analysis — but also to see what comes next for the students inspired by the study.”

To provide astronauts with a fresh, healthy source of protein, Mary Ann Lila and Allen Foegeding, of the Department of Food, Bioprocessing and Nutrition Sciences, find a way to fuse the polyphenols from cranberries, muscadines and black currants with edible protein. The result: light-weight, shelf-stable protein bars that don’t lose their texture and health benefits as they travel in space. 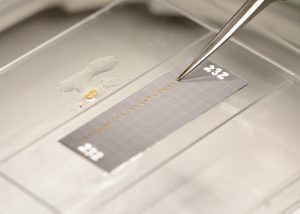 While Perera awaits the return of a second molecular plant biology experiment that went to the International Space Station on Space X last summer, NC State plant biologist Marcela Rojas-Pierce continues her quest to understand how large organelles known as vacuoles help plants perceive changes in gravity. Based on her earlier research, she speculates that the endoplasmic reticulum, a plant cell’s network of tubules and flattened sacs that produce and process lipids and proteins, somehow tethers the vacuoles to smaller organelles known as the amyloplasts. These amyloplasts are thought to initiate the first signal that perceives the direction of gravity when they settle to the gravitational “bottom” of a cell.