Beneath your feet is a hidden world, vital for human survival. CALS scientists are digging deep to find solutions for everything from water quality to food security.

The same CALS plant breeders who developed the popular Covington sweet potato have come up with another variety that could benefit North Carolina growers.

However, NC 05-198 has nice storage roots and can be planted and harvested earlier than Covington. If farmers grow the two varieties together, they can extend their growing season and, thus, use labor more efficiently.

NC 05-198 has another plus: It’s less susceptible to internal necrosis, a stress response that creates brown spots inside the part of the plant we eat — the storage root.

“We expect NC 05-198 to be complementary to Covington, and we hope growers will give it a try,” said Yencho, William Neal Reynolds Distinguished Professor of Horticultural Science. “It should be a good fit for the early, fresh market window.”

Keeping vineyard soil in the “Goldilocks zone” of appropriate moisture — not too little and not too much — can be challenging. To fix that, CALS soil physicist Josh Heitman is helping generate better water management strategies for North Carolina’s burgeoning winegrape industry.

In lab, field and modeling experiments, Heitman is working with scientists in the United States and Israel to figure out ways to measure and model evaporation and transpiration processes taking place in vineyards and their components: the vines and soil, and in the United States, the grass that grows between vine rows.

Because the mechanisms by which combined moisture and energy transfer occur in soil are poorly understood and difficult to predict, the sensors, measurement techniques and theories Heitman develops have significance for other croplands and rangelands, forests and urban areas. 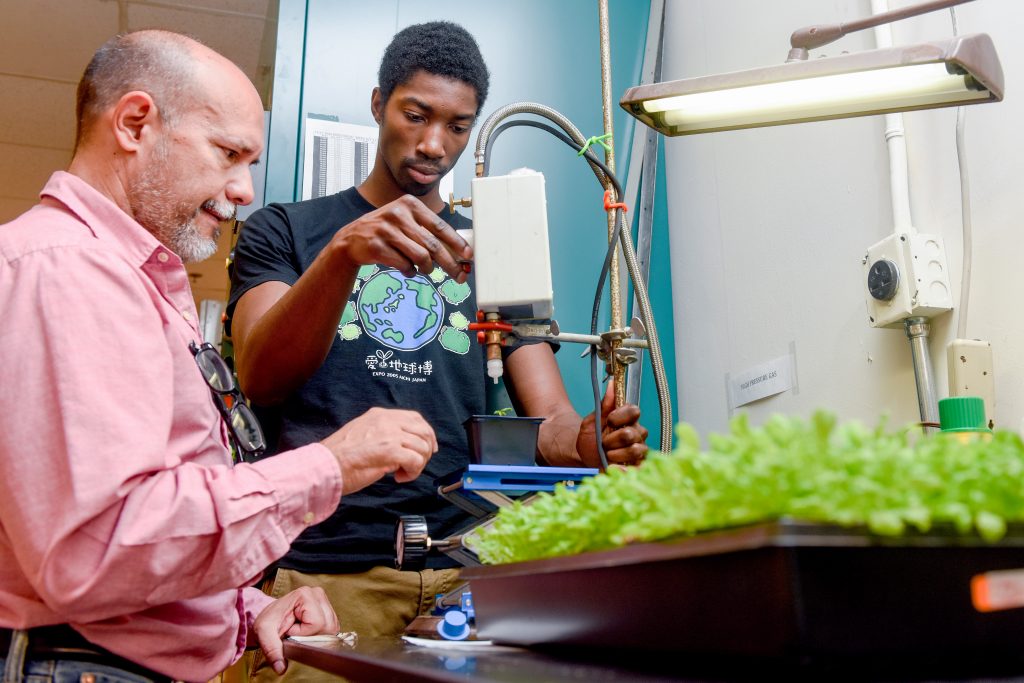 In the developing world, the starchy root crop cassava is a major staple food, capable of thriving in drought and poor soils — but viral diseases regularly lead to major crop losses. CALS scientists are making headway with African colleagues in understanding how the viruses that cause one of these diseases changes over time.

The basic knowledge being discovered as a result of the partnership has implications for developing rational, durable strategies not only for CMD but also for other plant pathogens that threaten global food security.

Studying the distribution of manganese from the soil surface all the way to the bedrock, NC State scientists have figured out why pockets of the southeastern Piedmont region contain high concentrations of the element in well water — especially shallow wells.

That’s important. High well-water manganese levels have been associated with heart and developmental defects, as well as cancer.

The Piedmont’s geology and hydrology play a major role in how manganese spreads, said Ph.D. student Elizabeth Gillispie, who conducted the study with soil scientist Matt Polizzotto and others.

“When bedrock … breaks down to form soil, you get a buildup of manganese in the saprolite, the layer just below the soil surface and near the water table,” Gillispie said. “That’s why some of the shallow wells have higher concentrations of manganese.”

The porousness of the North Carolina saprolite, where much groundwater is stored, helps move manganese deeper into the bedrock, she said.

Because more than 1 million Piedmont residents in four states — North and South Carolina, Virginia and Georgia — use well water with manganese levels above recognized water-quality standards, the scientists emphasize the importance of testing well water to ensure its safety.