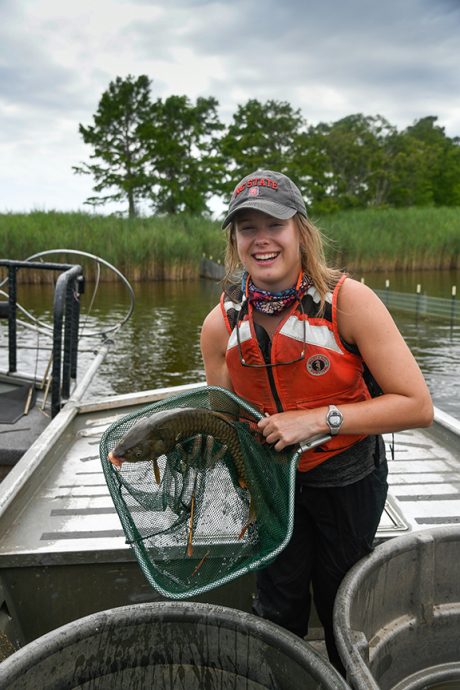 As a master’s student and National Science Foundation Graduate Research Fellow, I’ve checked a lot of the boxes for “things every graduate student should know how to do” – write grants, search scientific literature, analyze data and so on – but never have I faced an issue as inherently complex or collaborative as the one at Lake Mattamuskeet.

[pullquote color=’red’ align=”]With patience and effective communication, incredible feats are possible.[/pullquote]You may be familiar with the African proverb, “It takes a village to raise a child”; well, this sentiment couldn’t be truer for the current and future health of North Carolina’s largest natural lake.

I just needed to make sure that local stakeholders agreed.

My name is April Lamb, and I am part of a diverse team working to assess the current and future health of Lake Mattamuskeet, the centerpiece of the Mattamuskeet National Wildlife Refuge. Raised in a small house in the woods of rural China Grove, North Carolina, I have always harbored a passion for science and the outdoors. Now, that passion translates into my graduate studies at NC State and my work at the lake.

Because Lake Mattamuskeet is in trouble.

How Did This Happen? 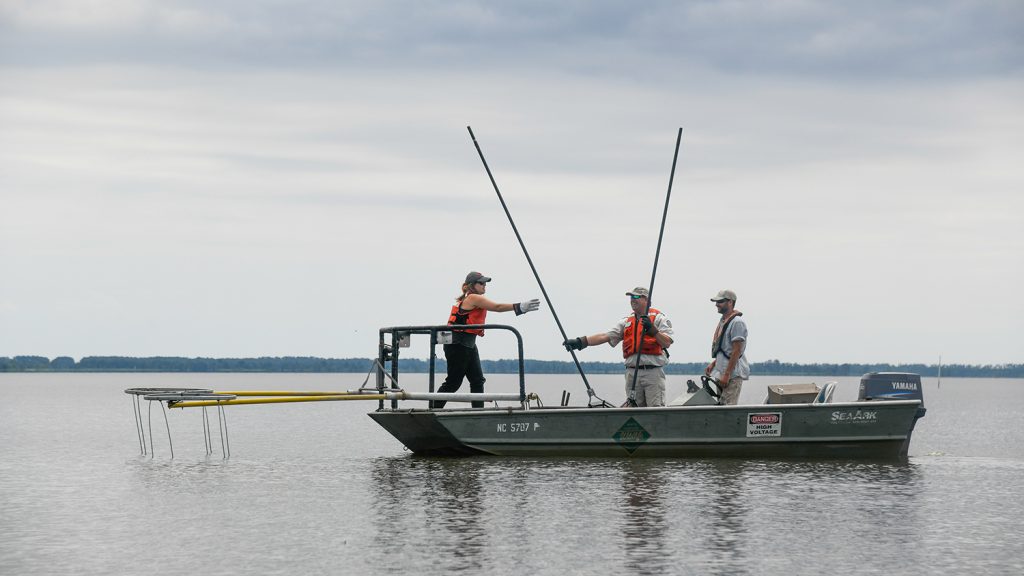 It started in the mid-1990s, when the density of submerged aquatic vegetation in the lake’s western basin began to decline. Not long after, the eastern basin saw drastic and more catastrophic declines. Where boaters once looked down upon fields of vegetation swaying beneath the surface, they now see nothing but brown muck. In addition to supporting the boating and fishing that bring key tourism to the area, the lake’s vegetation is an important food and habitat source for its fish, mammals and waterfowl.

Soon after my project on the lake was conceived – you can read the details in the box below – and before it was funded, I had to give a presentation at the Technical Working Group meeting, an open forum discussion for the lake’s primary stakeholders. This included Hyde County residents wholly invested in the well-being of the lake and its surrounding region, as well as members of its farming and hospitality communities. The audience also held Refuge staff and representatives from the U.S. Fish and Wildlife Service, the NC Coastal Federation and the NC Wildlife Resources Commission, members of whom inform research and management actions at the lake. 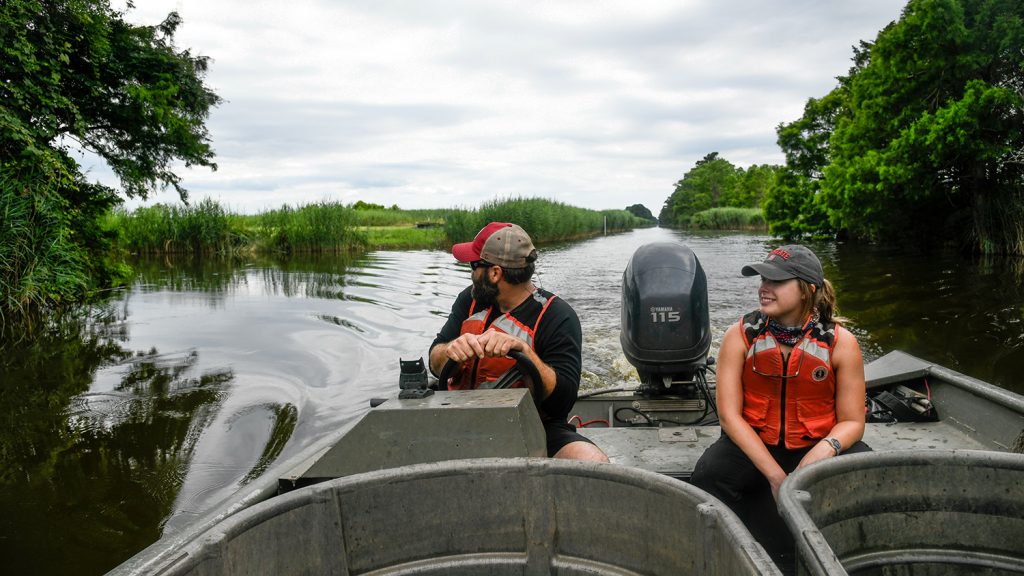 My adviser, Jesse Fischer, and I were two of the academic researchers invited to present a proposal at this meeting. I was extremely nervous. Sure, I had written proposals before, but never had I presented one in front of such a large audience – and this audience would decide whether my proposal was legitimate and worth funding.

When I stepped up to the podium alongside Dr. Fischer, it felt like stepping under a microscope. At first, I was incredibly shaky. I had met a few of these people before, but most were new faces. In that moment, I conjured up all the public speaking tips I had learned over the years: look everyone in the eye, stand up straight, don’t fiddle – and most importantly, know your audience.

[pullquote color=’red’ align=”]I was extremely nervous. … Never had I presented in front of such a large audience.[/pullquote]But wait, my audience was extremely diverse.

How was I supposed to effectively present this proposal? I was genuinely worried that I would say something too science-y – or just plain wrong – and jeopardize the whole endeavor. But looking around, I realized something that resonates with me to this day – we’re all on the same team. Despite differences in background, occupation, personal biases, whatever, every person in that room shares  a common goal: to make Lake Mattamuskeet healthy again.

My presentation that day was a success, met with nothing but support and encouragement, and marked the beginning of an incredible partnership which I’m grateful to be a part of.

When I started graduate school, I thought that I had a good grasp on what it meant to be an effective researcher, but that was only the tip of the iceberg. Each stakeholder I have worked with since that meeting has helped me in some way to grow and develop as a researcher and as a professional. Perhaps the most important lesson that I’ve learned is that with patience and effective communication, incredible feats are possible.

My project investigates the role of common carp (hereafter carp) in the recent widespread ecosystem changes observed in Lake Mattamuskeet. Carp are highly invasive and often act as ecosystem engineers as they impact a number of ecological processes through “middle-out” effects. These effects include an increased availability of nutrients and suspended sediment, which can result in the loss of aquatic vegetation and associated shift to a phytoplankton-dominated system, like the one currently observed in the lake.

Our proposed study  not only offers insight into the effects of carp management within the lake, but also directly assesses the feasibility of targeted restoration using transplanted vegetation following carp removal.

This  also complements another ongoing project that assesses environmental influences on variation in the lake’s carp population dynamic rates and develops age-structured population models to evaluate simulated exploitation levels necessary to cause recruitment failure and minimize carp-reduction efforts. In combination, these research projects provide an applied framework which will guide future conservation and management efforts. 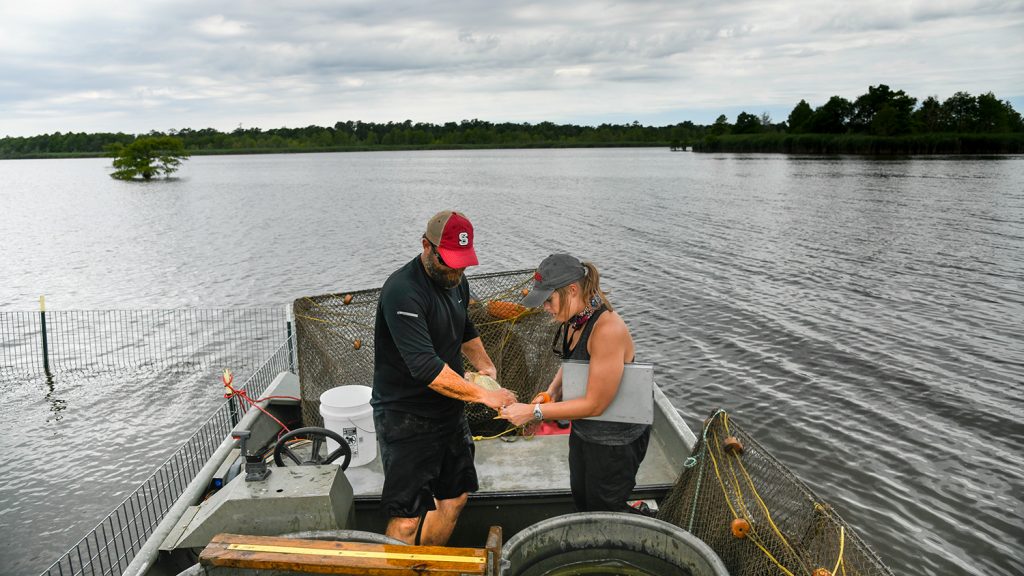