Employee Appreciation Week: Thanks for being part of our Pack!

For 35 years, CALS’ Rick Brandenburg has been finding ways to reduce the damage that insects cause to peanuts as well as to lawns, athletic fields, golf courses and other grassy areas. The impact of his turfgrass work recently earned him a spot on the cover of Carolina Greens magazine and the top honor bestowed by the magazine’s publisher, the Carolinas Golf Course Superintendents Association.

Brandenburg is a professor and department extension leader for entomology and plant pathology at NC State.

In the Carolina Greens article, writer Trent Bouts highlights Brandenburg’s life and career, from his childhood in Indiana to his work in North Carolina and around the world. 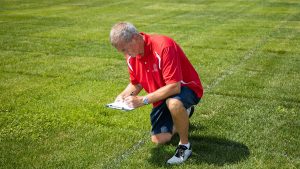 “His turfgrass insect research has led to books, countless presentations and carried him to nearly 50 different countries. Among numerous honors, he was made a Fellow of the Entomological Society of America in 2004 and named William Neal Reynolds Distinguished Professor by NC State in 2007,” Bouts writes.

The Distinguished Service Award Brandenburg has been selected to receive, Bouts adds, “celebrates his immense contribution to golf course superintendents, and the wider golf industry, over a 35-year career at NC State, where he obtained (a) Ph.D. in 1981.”

In an interview for Bouts’ story, Brandenburg recounted a life-threatening battle with malaria three years ago, saying that the experience caused him to hold dear a quote from Albert Einstein, “Strive not to be a success, but rather to be of value.”

As the CGCSA award attests, Brandenburg has achieved both – a successful life, and one of value.

Join us on Friday, Oct. 2, for our next CALS Virtual Town Halls. We will gather to discuss research, academic, facilities and other general updates and.

Dean Richard Linton is proud of the extraordinary dedication and drive embodied in the CALS Community. Watch his video message to hear the gratitude he has for our college.