Friday is the big day. One that so many CALS students have worked hard to reach.

Nearly 325 are slated to graduate on Dec. 15, including undergraduate, graduate and Agricultural Institute students. Not to mention four students who share the distinction of being named valedictorian.

Read on to learn the stories of seven of the college’s outstanding graduates. They’ve accomplished big things as students here, and now they’re poised to go out into the world and acheive even more. 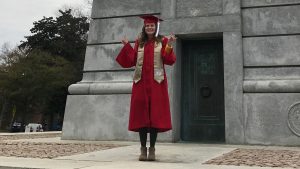 As a valedictorian for December’s graduation, Abby Brown has advice for future NC State students: Get to know your teachers.

“I didn’t come to college wanting to be valedictorian. I just wanted to do the best I could and learn the most I could,” says Brown, who is earning a bachelor’s degree in plant and soil sciences with a concentration in agroecology.

“In our department, we have professors who care about us professionally and personally, and that sets us apart. Their investment, encouragement and support in my life helped me reach this point,” she says.

Brown is especially appreciative of the help she got during her junior year as she conducted greenhouse research for Dr. David Jordan in the Department of Crop and Soil Sciences.

“Sushila Chaudhari, the post-doc, taught me what a greenhouse study looks like and what the important factors are to consider,” she says. “This experience taught me about time management, what an investment research is and the value of preparedness, and it showed me the behind-the-scenes work that goes into writing a greenhouse study based research paper.”

Brown says she’ll put that knowledge to work right away as she begins graduate school in soil science at NC State this spring. Calling herself a lifelong learner, she hopes one day to work overseas helping people who work in agriculture.

As she pursues that dream, she’ll likely follow the other bit of advice she has for incoming students:

“Never give up, but don’t let your academic success define you,” she says, “because we, as students, as people, are so much more than a grade.” 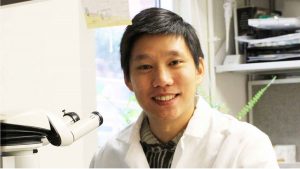 Thanks to the research of graduating entomology Ph.D. student Fu-Chyun “Clay” Chu, scientists now have new tools to help farmers get a handle on one of the most devastating and perplexing agricultural pests in North America – the western corn rootworm.

The pest, which costs U.S. farmers an estimated 1 billion dollars each year, has proven notoriously difficult to control. Farmers have tried insecticides and crop rotation, but the rootworm keeps evolving ways to overcome these strategies. Since the 1990s, many farmers have been using transgenic corn with a toxin that kills the larvae, but strains have recently been found that aren’t killed by the toxins.

“People have still not figured out what causes the resistance,” Chu says. “A big reason for this is because there is too little basic research, especially molecular genetic studies, done on the western corn rootworm.”

Over the past six years, Chu has worked diligently in the lab of Dr. Marcé Lorenzen to devise the first-ever transgenic strains of the pest. In the rootworm, fluorescent proteins are produced whenever a targeted gene is activated, giving researchers a way to study that gene. Chu hopes that as scientists learn more about the insect’s genetics, they can develop new strategies for managing it.

Chu’s work wasn’t easy. To create the transgenic rootworm, he had to figure out how to keep rootworm colonies alive in the lab and healthy for generations. In the end, he devised a specialized rearing system that will aid scientists who want to create and screen transgenic worms.

Chu, who came to NC State because of the strong reputation of the university’s entomology program, says he’s looking forward to “graduating, finding a job in industry and having a baby with my wife.” One day, he hopes to return to his home in Taiwan and work in academia.

“Overall, Clay has made major contributions to every project my lab is working on and has helped countless others troubleshoot issues that have come up in their research projects,” Lorenzen says. “He’s not only an outstanding graduate student but a really nice guy.” 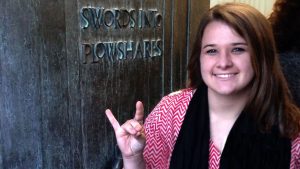 Catherine Harward became her dad’s “right-hand man” at Rocking H Cattle Company when she was 10 years old, learning how to give vaccinations and wrangle customers at auctions.

She loved every minute.

So when she accepts her animal science diploma this week, Harward is heading back to Stanly County armed with a solid scientific foundation and some new ideas.

“I’ve always known I wanted to go back to the farm after I graduated,” Harward said. “It’s a passion, and it’s something to be proud of – having something to give back to my family.”

Harward’s animal science major includes a concentration in industry and minors in agricultural business management and leadership, augmented by a three-week study abroad trip to farms in Italy and Croatia to study the international market.

“When you grow up in the industry, you know how to feed cattle, how to give vaccinations, the day-to-day stuff – but then you come to CALS and learn the science behind everything you’ve done for the last 10 years,” Harward said. “That was a huge perspective I gained here: how important it is to learn the ‘why’ behind everything.”

Since Rocking H is one of several family farming endeavors, Harward will also continue her work on livestock marketing from Virginia to Georgia. Her other goal is to volunteer with organizations like the North Carolina Farm Bureau – where she completed an agricultural policy internship – to be an advocate for agriculture.

“If you look at other departments, whether it’s agronomy or agricultural education or others, you learn how agriculture is all tied together,” Harward said. “You need every single industry in order to make agriculture efficient.”

One of the keys to an enriching CALS experience is simple, Harward said: Keep an open mind to all opportunities that come your way.

“I would’ve never thought I would do study abroad or an internship away from our farm, because – as you know if you come from that background – there’s always something to do on the farm,” Harward said. “But those opportunities expanded my understanding of agriculture and myself. It’s important to take opportunities even if you didn’t anticipate them.” 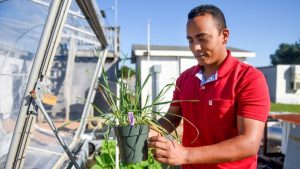 Sayed Mashaheet’s research into wheat and ozone tolerance could actually help prevent a worldwide famine. The NC State University Ph.D. student in entomology and plant pathology is working to develop resilient wheat varieties that are more tolerant to ozone — a pollutant often associated with climate change – as well as more resistant to wheat rust, a devastating disease that looks like rust on wheat stalks.

In 1998, a new strain of wheat rust was detected in Uganda. It was confirmed in 1999 and named Ug99. This new strain of the disease can destroy a wheat crop, leaving farmers and their families without food or income after working hard for an entire growing season, even if the disease reaches the field only few weeks before harvest.

Across the globe, scientists are in a race against the disease, working to develop wheat varieties that are resistant to rust. The rapid pathogen evolution, the airborne spores, the difficulties of fungicide application and the lack of resistant varieties combined make it hard to prevent the disease or stop its advance.

Mashaheet’s work specifically focuses on identifying lines of wheat that are tolerant to ozone, a toxic gas that can weaken wheat, making it more susceptible to diseases like wheat rust. “If wheat rust reaches Asia, with a large portion of the world’s population, and significantly high ozone pollution, famine is a real possibility,” Mashaheet said. 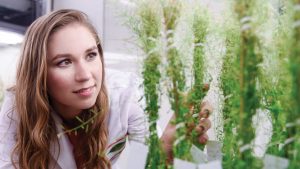 Growing up in one of North Carolina’s poorest counties, Brooklynn Newberry knew her high school’s shortage of Advanced Placement courses and extracurriculars would make college applications a challenge.

“I really had to be motivated to go to college on my own,” she said. “I don’t have parents who went to college to provide me with that kind of guidance.”

Brooklynn is the oldest of six and wanted to be the first in her limited-income family to get a degree. When her first application to NC State’s College of Agriculture and Life Sciences was deferred, she chose an alternate path to CALS through a local community college. She also threw herself into volunteer work with organizations focused on environmental cleanup and ending hunger.

Her second application was accepted.

Since arriving on campus, Brooklynn has worked as an assistant in a plant molecular biology laboratory and spent 10 weeks in Brazil investigating the interplay of vegetation, climate and fire.

She is now a senior plant biology major, on track for December 2016 graduation. She has two goals: a career in conservation biology and becoming a role model for other rural students.

“I like to encourage students – especially if they’re from the same background – and tell them how I got here,” she said. 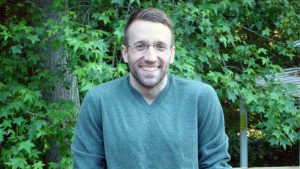 When Cameron Parsons took an introductory food science course as an undergraduate student pursuing a history degree, he found it to be an interesting elective. Little did he know that, just a few years later, the memory of that course would trigger a complete change of career.

“After graduation, I got out and worked for a few years,” Parsons says. “I eventually decided to pursue a new career path by going back to school. I remembered how interested I was in the food science course, so I looked into careers and found that food science afforded opportunities in several fields.”

So he re-enrolled at NC State and earned his second bachelor’s degree – in food science – in 2012.

And this week, Parsons will receive his third NC State degree: a Ph.D. in food science, with an emphasis on the molecular biology of foodborne pathogens.

“I knew virtually nothing about microbiology as an undergrad but had to take the course to graduate,” he says. “Within the first week I was completely fascinated by a world around me I never knew existed.”

Along with his microbiology research and food science courses, Parsons served as a teaching assistant in the Biomanufacturing Training and Education Center (BTEC) during each semester of his Ph.D. education. He says that among his biggest achievements is his mentorship of undergraduate students.

After graduation he plans to work on a postdoc in his current lab, examining foodborne pathogen prevalence and characteristics in wild bears.

“The FBNS department has been extremely supportive, both as an undergraduate and a grad student,” he says. “The faculty and staff have always been generous with their time and genuinely willing to help in any way needed.” 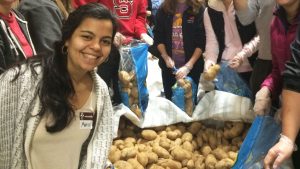 “I have always been interested in sustainability, and in our world today, it is important to find the most sustainable ways to feed people and provide protein sources for balanced diets,” Tellez says. “Meats are an important source of protein, however, with meat production there is an animal waste problem and other environmental concerns that need a cost-effective and sustainable solution.”

Anaerobic digestion of animal waste is a sustainable method of using waste byproducts, but it needs to be more cost-effective, Tellez says. So through her master’s research, she explored the limitations and barriers to the adoption of anaerobic digestion in the North Carolina pork industry.

“I designed experiments to find more value in biochemical methane, a byproduct of anaerobic digestion,” Tellez says. “I developed a theoretical model showing how the agricultural production/distribution system and agricultural sustainability fit into the global economy and how they are affected by a country’s geography and national capital. In modeling the big picture of ag production, I found my future passion.”

Tellez plans to pursue a Ph.D. in public policy and environmental studies, to examine food insecurity on a global scale and help shape food and energy policies.

A Primer on Coronavirus, Variants, Mutation and Evolution

Erin McKenney tell us what she learned from participating in the Libraries' first Open Pedagogy Incubator.