PSC had its first meeting on August 22nd. The club hosted a booth at the NC State Fair in the poultry tent that highlighted different egg production systems. Club Adviser Ms. Lynn Davis, wrote a grant funded by the American Egg Board via USDA which funded the creation of the booth display. The focus of the booth was to inform the public about the differences in the various systems and the eggs sold from each system. A small-scale 3-D model of each was created for the display. 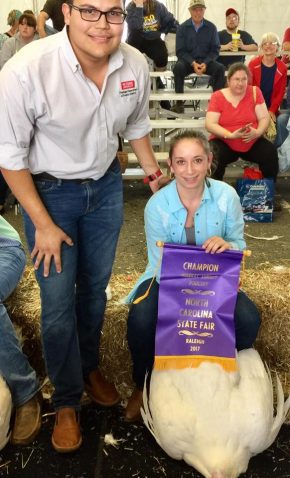 Members also assisted in the Youth Market Turkey Show by directing foot traffic and aided the participants with getting their turkeys to the show ring. Other activities this semester include various food drives and a ham/turkey sale. The hour’s members work at each of these activities contributes to their attendance the International Processing and Production Expo in January.

NC State CALS Ph.D. student Andrea Rubio loves working with animals too much to trade up her dusty T-shirts and boots for a more professional look post-graduation this fall.