Former French major Emily Reed did not discover her passion for biology until her junior year at the University of North Carolina Asheville.

“I grew up thinking I should excel in English and avoid math and physics,” Reed said.

Then she took a molecular and cellular biology course with an excellent female professor.

Reed is now on her way to obtaining a Ph.D in applied ecology from NC State’s College of Agriculture and Life Sciences. With it, she hopes to continue research outside of academia. 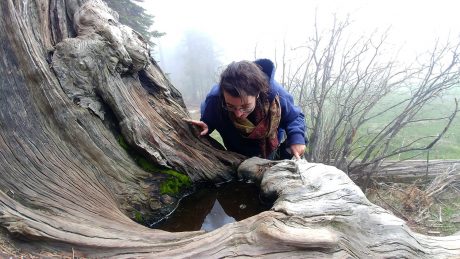 Why did you choose NC State?

When you’re applying to graduate school in biology, you identify an advisor you want to work with as you’re applying. And I found Dr. Martha Burford Reiskind, who’s [now] my advisor. She not only does really fascinating research with evolution and genetics, she’s also an inspiring person for me to read about and talk to. Her support and involvement with both the Department of Applied Ecology and with CALS made the college a big draw for me.

What does it mean to you to be a woman in STEM?

Being a woman means bringing new ideas and new outlooks and a different kind of background than we’ve seen traditionally represented.

What are some of the challenges that you have faced being a woman in STEM?

I think that there are … two sides to that. I think there’s a lot of internal naysaying and not a lot of confidence. As a French major, I grew up thinking pretty normatively in terms of gender – thinking that I should excel in English and avoided math and physics. Because I avoided those things, I never realized how much I liked them. I think that internalization is one of the reasons that I didn’t get into it earlier.

I think another one of the unseen adversities that a lot of women face, myself definitely included, is a lot of self-doubt. In a field surrounded by men, especially in a department where a lot of the graduate students are women but the majority of the faculty are male.

What exactly are you researching?

My Ph.D. research is about how urban and urbanizing ecosystems affect the spread and movement of an invasive mosquito called Aedes albopictus. It’s the Asian tiger mosquito, the most invasive mosquito in the entire world. What we know is they’re really well-adapted to live around humans. I want to find out what specific features of an urban landscape mosquitoes use to get around.

Where do you see yourself after graduation?

My goal is to get a job with a federal or state agency after getting my Ph.D. My dream position would be working the United States Geological Survey on invasive species management.

We have a USGS partnership with the applied ecology department that makes up the Southeast Climate Adaptation Science Center. They look at how research in applied ecology and biology can be applied to help communities facing the effects of global change, especially things like rising sea levels and more extreme weather events like increased hurricanes. But they also do things like, how do we manage invasive species and these areas that we want to protect? … Because I’ve been able to see some of the work they’ve done with my connection to applied ecology, I’ve gotten really interested in that as a potential career path.

What have you learned at NC State that you will take with you when you graduate?

I never took a genetics class before I came here, but now I’m a population geneticist studying mosquitoes. Learning about genetics, bioinformatics, coding – I’m still learning so much. …

Congratulations to Ashton Merck for receiving a poster award during P-Week!