Groundwater aquifers supply drinking water to approximately 50% of the world’s population and provide 43% of the total water consumed in agricultural irrigation. Unfortunately, across the globe many of these critical systems are in a state of unsustainable drawdown.

The depletion of groundwater leads to a variety of problems including saltwater intrusion and land subsidence. The overuse of groundwater threatens the water security of large urban areas and agricultural production in critical regions of the United States, India, and China.

The solution to overextraction is a management regime that limits pumping, but this requires cooperation and coordination. As in any setting where a group of people must come together and reach a consensus, disagreements can limit action.

A new paper recently published in Applied Economic Perspectives and Policy by ARE faculty member and CEnREP affiliate Eric Edwards explores the incentives for cooperation and coordination required to govern groundwater. The paper, co-authored by Todd Guilfoos at the University of Rhode Island, emphasizes that the problems and solutions to overextraction are fundamentally local, although they are similar across the globe.

To understand why groundwater is depleted, economists often think about its scarcity in terms of supply and demand. Where supply is high and demand is low, price is low, and water is abundant. In excess of 80% of the world’s groundwater basins fall into this category.

In areas where water demand is high—around large urban areas or near agricultural regions—or supply is low—in arid and semi-arid regions—water scarcity increases. Water scarcity can lead to the overextraction of the groundwater resource and the need to manage pumping to mitigate the collateral effects of drawdown.

Because groundwater basins often span hundreds of miles and even multiple countries, governance can appear daunting. However, the negative effects of pumping—called externalities by economists—are more localized, reducing the scope of governance challenges and limiting the number of people who must reach agreement to solve them.

To understand the economic factors associated with successful groundwater management, the authors looked at 10 aquifers across the world as shown in the figure. By contrasting attributes of the aquifers, the problems caused by drawdown, and, where applicable, governance successes, the authors were able to draw general conclusions. 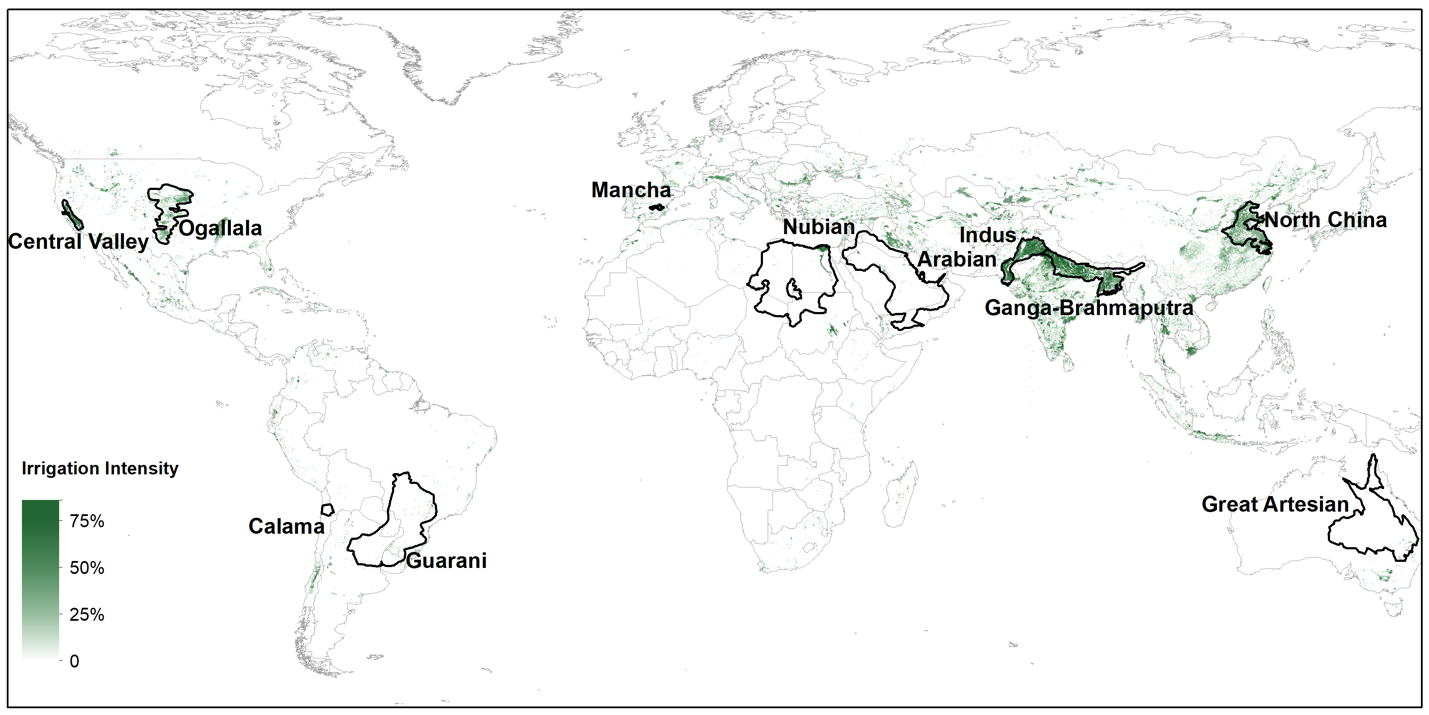 But this is only one part of the equation, because the cost of management also matters. “The key is that users need to see enough benefits to overcome all the costs of reaching an agreement.”

These benefits and costs can vary between and even within aquifers. The Ogallala Aquifer in the United States, for instance, has water extractions that are slowly depleting its reserves over time. In some areas, users have created management districts or areas that reduce pumping, in others, pumping has been described as the “wild west” with few rules.

“There doesn’t appear to be a cookie cutter method to managing groundwater, because basins and people differ so much,” say Edwards. “In areas where groundwater is overexploited, a wide variety of management approaches could be effective, and which is chosen comes down to cost-effectiveness and user buy-in.”

You Decide: Where Can We Cut Back?

When money is tight, people look for areas to cut back on their expenses to help stretch their dollars. What are some tactics and principles consumers should consider when looking at their finances?

Subsidies for Beginning Farmers: Should We Bet the Farm?