The North Carolina Soybean Producers Association was one of the first commodity groups to pledge their support for the North Carolina Plant Sciences Initiative (N.C. PSI), which aims to create a hub for scientists, government and industry to come together and solve agriculture’s most pressing challenges.

The mission of the soybean associations is to maximize the profitability of North Carolina soybean farmers in an economically and environmentally sound manner, so there is a natural synergy.

In an average year, North Carolina farmers plant 1.6 million acres of soybeans, more than any other crop, and most of those soybeans are crushed in-state to provide feed for the local livestock sector.

We talked with Owen Wanger, CEO of the North Carolina Soybean Producers Association, to learn more about the association and why it supports the N.C. PSI.

Can you tell me a bit about the North Carolina Soybean Producers Association?

North Carolina Soybean Producers Association is a checkoff-funded organization. A checkoff is a self-imposed tax that growers had opted into voluntarily for decades but became federally mandated with the 1990 Farm Bill.

The federal checkoff basically mandates that at the point of sale 0.5% of the value of every bushel of soybeans sold is collected. Within North Carolina, that 0.5% goes to us, we keep half in the state and we send the other half to a national organization called the United Soybean Board. We use these checkoff funds to fund a number of activities including research, market development, and grower and community outreach.

We have a staff of five full-time employees and a strong, long-standing relationship with North Carolina State University where we fund about half a million dollars of research annually.

What is the role of your commodity in the North Carolina economy?

Research from NC State’s Department of Agricultural Economics has demonstrated the tremendous economic impact of agriculture to the state, supporting $87 billion in economic activity and 17% of the state’s jobs. Soybeans play a critical part in that success and consistently place with tobacco as the state’s top crop in terms of receipts.

That said, North Carolina is by no means the center of the universe when it comes to row crop production. A challenge for us going forward is that so many of these ag tech innovations are being developed with a different kind of geography and production system in mind.

Think about the flat, open expanses of central Illinois or Mato Grosso in Brazil. Some of these new ag tech platforms were created with those kinds of environments in mind but in North Carolina we’ve got small, irregularly shaped fields. Farmers have smaller equipment and they’re going from field to field, oftentimes combating traffic just to do so.

One of the things that we’re really hoping for from the PSI is the ability to either adapt existing ag tech platforms or create new ones that are more suitable to the scale and focus of agriculture in North Carolina. That’s probably the biggest thing. At the end of the day, if that can happen, we’ll see a really positive return on this grower investment.

What are some of your other hopes for the Plant Sciences Initiative?

In agriculture, we have traditionally had an almost singular focus on yield, though that seems to be changing. In the case of soybeans, for example, more focus is being put on quality characteristics, like the amino acid and fatty acid profiles of the bean. One thing we’d like to see from PSI is more research aimed at helping North Carolina growers unlock these quality characteristics. Just as importantly, we’d like to see the University help the ag sector leverage technologies like blockchain or efficient quality testing that can help ensure that a good chunk of the added value finds its way back to the grower.

In addition to new technologies emerging out of PSI we hope the Initiative will raise the profile of the already well-regarded ag program at NC State. With that higher profile, we anticipate NC State will become an East Coast hub for some of the national and international conversations taking place surrounding Ag Tech and a beacon for more federal and private funding to compliment the growers’ own significant investment. 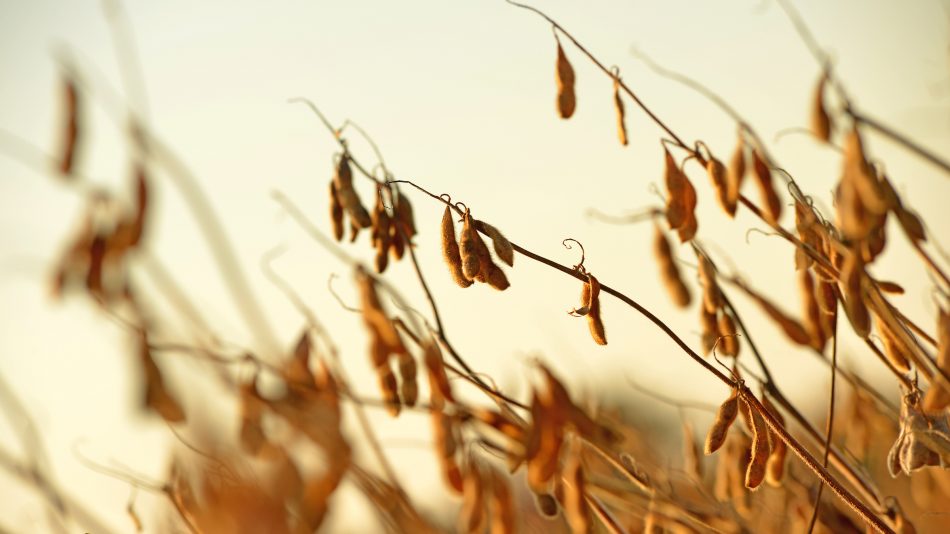 Why did your association decide to give to the Plant Sciences Initiative?

I wasn’t around when the decision to support PSI was made, but the Soybean Association was one of the first commodity groups to sign up for the project. Credit for that goes to the board, my predecessor Charles Hall, and the recently retired Dan Weathington from The Small Grains Association for getting this thing up and running. We feel like there’s a pretty strong need for the N.C. PSI on a number of levels.

What are the major challenges and opportunities for producing soybeans in NC?

As I mentioned, we’re outside of the center of the universe so certain technologies are slow to find their way into the state. That’s one reason why we’re so intent on funding a lot of research. We sort of have to foot the bill for research ourselves because the seed companies are more focused on agronomic conditions in the Midwest, so that’s a challenge.

Another challenge is the growing conditions that are innate to the southeast and the soils that we have. We’re not a low-cost producer of soybeans. With that, we need a strong basis to justify growing soybeans in the state. In the past, we’ve gotten support from the huge livestock sector in our backyard but the next really big concern for us is the changing demographics in the state and the threat that poses to support for the industry. Hopefully PSI can help in fostering stronger connections between Raleigh and the agricultural sector that is so important to our rural communities.

Consolidation in the ag value chain is another challenge. That’s not unique to us but we’re seeing more consolidation among our input suppliers, such as seed and chemical producers, as well as among our customers. A farmer is relatively small in size compared to the folks that he’s buying his inputs from, or he’s selling his product to, and over time there’s this feeling of growers losing some leverage in their commercial transactions.

You mentioned a long-standing relationship with NC State, how has NC State been there for the folks in your association in the past, with those challenges or others?

NC State recently had a changing of the guard so to speak in the soybean program. Jim Dunphy was the NC State Soybean Extension Specialist for over 40 years and he had several soybean varieties named after him. His program was instrumental in developing some new varieties and doing varietal testing in the state, which is incredibly important because private industry is less willing to do that testing themselves. Testing crop protection regimes in the state has been another important research focus for our producers.

And now Rachel Vann is the successor to Jim Dunphy, and I know that our growers are incredibly pleased with the progress that she’s made in that role. Both in terms of the findings that are coming out of her program and her ability to communicate those findings.

Finally, we are lucky to have such a strong Extension program in North Carolina, which is one of the best in the country. Through extension, there’s just some really great delivery channels for getting that science into the hands of growers.

Do you have anything you want to say to folks who are considering giving to the Plant Sciences Initiative but haven’t yet?

If you’re looking to establish relationships and credibility quickly in southeastern agriculture I can’t think of a better place to invest your dollars. You’ve got a ready pool of technology, of commercial agriculture, of researchers. Your competitors are going to be in there as well but it’s just a really exciting laboratory and one of only a handful of these kinds of set-ups in the country.

TreeCo, start-up company founded by by two NC State researchers, is setting out to revolutionize the forestry industry by combining insights from tree genetics with the power of genome editing.

An interdisciplinary team led by Cranos Williams is setting out on a three-year project to use artificial intelligence to make sweetpotatoes even more profitable. The team will image hundreds of thousands of sweetpotatoes to increase the percentage of sweetpotatoes grown that are USDA grade 1.