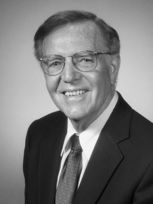 Dr. Leo W. Parks, Professor Emeritus, was born in Wetaug, Illinois, and raised in the Chicago area. He received his B.S. with honors from the University of Illinois, master’s degree from Indiana University, and Ph.D. from the University of Washington. Under the auspices of a National Research Council-National Academy of Sciences Fellowship, he was a post-doctoral resident research associate in biochemistry at the Argonne National Laboratory. This was interrupted for active duty service in the US Army. After his service, Dr. Parks joined the faculty at Oregon State University (OSU), Corvallis, Oregon, as an assistant professor and progressed through the ranks to professor. Dr. Parks came to NC State in 1985 as professor and head of the Department of Microbiology. During his career, thirty-two graduate students earned their doctoral degrees with his supervision. His research focused on the biosynthesis of ergosterol in the yeast Saccharomyces cerevisiae and ergosterol as a target for antifungals.  He regularly taught the undergraduate and graduate courses in microbial physiology and was Head of the Department of Microbiology from 1985 through 1993. The NC State microbiology seniors presented him with a plaque at the May 2001 graduation ceremony, recognizing his outstanding teaching and expressing their gratitude to him for his caring attitude. Leo and his wife, Nancy, reside in Seattle, Washington.

We extend our gratitude and many thanks to the generous donors to the endowment, including alumni, family, friends, NCSU and corporations that make this Lectureship possible.

Past Lecturers funded by the L.W. Parks Distinguished Lectureship

The Leo W. Parks Distinguished Lectureship in Microbial Physiology honors Dr. Parks in perpetuity for his selfless attitude and many contributions to the university community.  The Lectureship is made possible by the generous donors who helped establish a permanent endowment in the North Carolina Agricultural Foundation, Inc., with matching support from the Department of Microbiology in the College of Agriculture and Life Sciences at North Carolina State University. Special thanks to Warren Casey and Hosni Hassan for their leadership role in the creation of the endowment. Contact information: Chris Cammarene-Wessel, North Carolina Agricultural Foundation, Inc., North Carolina State University Box 7645, Raleigh, NC  27695; 919-515-7678; chris_wessel@ncsu.edu.

This will be announced in Spring 2021