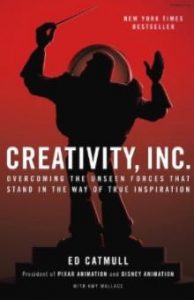 This month’s highlighted leadership book is “Creativity, Inc.,” by Ed Catmull, president of Pixar Animation and Disney Animation and co-founder (with Steve Jobs and John Lasseter) of Pixar Animation Studios. For nearly 20 years, Pixar has dominated the world of animation, producing such great films as “Toy Story,” “Monsters, Inc.,” and “Finding Nemo.”

In the book, Catmull reveals the ideals that have made Pixar so successful. The essential ingredient was the unique environment that Catmull and his colleagues built at Pixar, based on leadership and management philosophies that protect the creative process and defy convention.

As a young man, Catmull had a dream to make the first computer-animated movie. He nurtured that dream as a Ph.D. student at the University of Utah. He then forged a partnership with George Lucas, and that led indirectly to his founding Pixar with Steve Jobs and John Lasseter in 1986.

“Creativity, Inc.” is a book for mangers who want to lead their employees to new heights, a manual for anyone who strives for originality and a trip into the center of Pixar Animation. This book is about how to build a creative culture—but also as Ed Catmull writes, “an expression of the ideas that I believe make the best in us possible.”

Meg Anderson Talks About Teamwork, Community and Being an Ambassador

Taking Farm Tech to the Next Tier