“I Call Them My Baby Girls”: AGI Grad Named Pig Farmer Of Tomorrow

Bailee Arnold lives in the suburbs and didn’t grow up with agriculture, but she’s managing a 4,000-head sow farm and was recently named a 2019 Pig Farmer of Tomorrow.

“I call them my baby girls,” Arnold said, and they’re the best part of her day at Maxwell Foods LLC’s breeding-to-wean farm in Goldsboro, N.C. Her job involves caring for sows and piglets until they are weaned, and “Day One” pig care is a core value: “We make sure each of our baby girls gets started on the right hoof.”

Arnold graduated from NC State’s Agricultural Institute with an associate degree in livestock and poultry management. Maxwell Foods is a diversified turkey and pork processor and one of the top pork production systems in North Carolina.

She had been studying biology as a pre-vet student, “because I was always that kid who loved animals,” but found it wasn’t as hands-on as she had hoped. Then she heard that Sanderson was going to build a plant in Nash County, site of her hometown.

“And I thought to myself, you know what, I’ll try chickens. So I started at NC State, and I started working in the barn with Dr. Billy Flowers, and I was hooked,” she said.

Flowers is a Williams Neal Reynolds Distinguished Professor in the Department of Animal Science. He’s also a swine expert regularly credited by students with inspiring them to study pigs.

While at AGI, Arnold got an internship with her company, sponsored by the North Carolina Pork Council, and that sealed the deal.

“They paid my salary and, for seven weeks, I had an intensive overview of the entire company, from artificial insemination to the sow farm, nursery, finishing floor, transportation and labs,” she said. “I was pretty much immersed, and I really enjoyed it.” 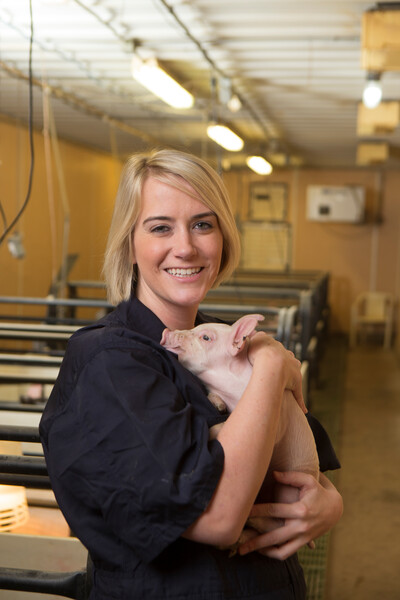 Arnold was one of just two female sow farm managers for the company when she started in 2013. Her job, which she describes as full-time midwife and babysitter, may mean assisting a sow with the birth process; getting a pig milking in a healthy way; administering vaccinations; checking ventilation and maintenance of the property; checking in with staff; and monitoring sows and babies.

She also runs the company’s Instagram account, which she says is a good educational tool: “Plus, people just love pictures of baby pigs, and I love sharing what I do!”

Sow gestation is 114 days, then babies are with her for about three weeks, when they are weaned and leave her farm for another nursery (also in North Carolina). If a sow is healthy, ready, and a good candidate, she will be bred again. They average four or five parities (litters) but may have as many as nine, Arnold said, and some of the piglets will come back to her as sows.

“It’s never easy to let them go, but that’s what keeps me grounded,” she said. “I’m gonna care for them the best I can. They are a food product, and I respect them for that.”

She also appreciates working for a company that holds animal well-being as one of its top priorities.

“Pig farmers care about their animals so much that we do everything we can to make sure our animals are provided for in all circumstances,” Arnold said. “In Eastern North Carolina, we see some extreme weather, but my employees and I are here seven days a week caring for each animal.”

Arnold, who has no direct background in agriculture and says she’s two generations removed from farming, encourages women to give the traditionally male-dominated industry a try.

“I live in a suburban area, and I’m a pig farmer, quietly managing a 4,000-head sow farm,” she said. “I encourage women to try new things, because that’s what I did – I tried something new and fell in love with it.

“Obviously, it’s a male-dominated industry, but it’s slowly evolving and they’re catching up,” she said. “I just trained another female who has stepped up to management, and there are three of us now in various other positions. It’s really encouraging, because it’s long been only a man can bring home the bacon, but we can do it and want to do it.

“It’s a very rigorous job, and it’s empowering to know I can do that,” she said. “I have a good job, benefits, a company truck and I enjoy having a product to offer my neighbors.”

Her career comes with hardships, she added, but they’re worth it.

“My daughter is only 8 months old, but my hope for her is that she will enjoy what I do and follow in my footsteps or in another non-traditional career,” Arnold said. “I want people to know there is success in trades and agriculture, and I want to bring her up in a world where she’s educated about agriculture and knows where her food comes from and how.”

Boy, do our alumni have stories to tell…