How To Give A TED Talk: Poultry Science Alum Diego Bohórquez

When he arrived at CALS from Ecuador in 2005, exchange student Diego Bohórquez spoke almost no English. For his first research talk, he had to memorize his presentation. Then the audience began to ask questions — in English. Bohórquez was stumped.

Flash forward 12 years. An assistant professor at Duke University, Bohórquez now speaks the language with the verve and clarity needed to win a spot presenting his exciting gut-brain research on one of the most competitive stages in the world: at the 2017 TED Conference.

Held annually since 1990, the TED event invites some of the brightest minds to share their most innovative ideas in 18 minutes or less. TED Talks regularly get millions of views online, inspiring their own radio show and podcast. A spot onstage grants enviable access to that rarest of commodities in the science world: a broad popular audience.

The TED Fellows program tapped Bohórquez to give a talk in 2017. Bohórquez’s work examines how the relationship between the gut and the brain can be used to modulate behavioral disorders — watch his dynamic TED Talk for the details. Science magazine published one of the resulting papers, and the resulting story rocketed to the top spot on their website.

Now an assistant professor of medicine and neurobiology at Duke and recipient of numerous awards including a Grass Fellowship in the Neurosciences, an NIH Career Development Award and the Polak Young Investigator Award from the Association for Chemoreception Sciences, Bohórquez says he still had to train hard for the TED stage. 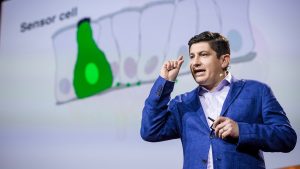 How do you get invited to give a TED Talk, anyway?

In life, there are two ways to get things. One is to wait until they get around to you, and the other is to go get them yourself.

In January 2006, I landed an oral presentation at a big poultry conference in Atlanta. I had only been in this country nine months. I memorized my presentation until I could say it naturally, and people liked it…until I got to the question-and-answer section. I couldn’t understand any of the questions! That was a bit embarrassing but I learn a great lesson: those who make a difference are those who communicate their ideas effectively.

And around that time, TED Talks started being posted online for free.

I realized that the best speakers were at TED, and I thought, how do I get there? I started to seek out training. And I realized TED has a fellowship program, so I waited until my idea worth spreading was mature enough, then applied. They select 15 fellows out of thousands of applicants. I was one of them.

When you got the call, did you feel ready?

Yes and no. Yes in the sense that I’ve been giving talks for a while, but the excitement of speaking is, what are the audience’s expectations and how can I fulfill them? Every single person is different, and so every single audience is different. That’s the challenge.

I was also coming from a scientific background. Having to explain to a lay audience what “transgenic” means is always a challenge. We get so comfortable talking our own jargon, and it’s difficult to deconstruct it on the stage when the clock is ticking. But they give you extensive coaching. That made me appreciate how much science, art and business are involved in public speaking. They have people helping you script your story, helping with your body language, helping put makeup on you.

It goes pretty fast — five minutes, in this case. It’s very exciting to see the reaction of people to your message. The TED audience is one of the most prepared audiences I’ve seen.

What kind of response have you gotten?

It has been a transformational experience. I realize that there is more and more interest in having validated scientific information out there. The general public wants, needs, demands that. I think for me, TED showed me the path to be able to continue connecting with the general public.

What’s next for you professionally after such a big event?

At a practical level, we’re just starting to get to our next big story in the lab on gut-brain biology — that should come out in 2018. On a side note, I am one of the founders of Duke Gastronauts, a research focus group exploring gut matters. We just set a date to have our second symposium, this time in Singapore on May 2-4, 2018.

Our ambition is that, by understanding the circuitry from the gut to the brain and the brain to the gut, we will be able to bring relief to people in modulating behavioral disorders, whether they are appetite-based or mood-based, by acting on the gut — particularly on the cells that sense food.

Going back in time for a moment — do you remember what made you choose CALS at NC State? 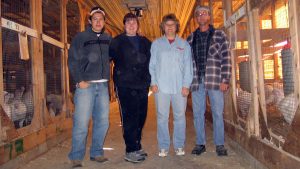 I grew up on a farm in the Amazon region of Ecuador. Someone suggested that I study agriculture so I could help my parents, so I ended up going to an agricultural school in Honduras that has a good relationship with CALS. A professor there put me in touch with Peter Ferket, professor of poultry science and nutrition and a wonderful mentor.

Have you ever had a failure that set you up for later success?

One I remember: I did finish my Ph.D. successfully in a relatively short time, but what I didn’t tell you is that my first Ph.D. committee meeting was a failure. The committee suggested I reshape and come back with a whole new project.

In going back to the drawing board, I realized I had put as many well-known professors as I could on the committee without realizing that they didn’t necessarily have the complementary expertise or motivation to see what I was seeing. That was nine months into my Ph.D. So my advisor, Peter Ferket, and I met, and we thought, well, we need to refocus the project in this area, but we also need to refocus the committee members. So we readjusted both, and came out the other end better. One important lesson I learned was to improve my listening skills and seek great mentorship.

What was the best advice you got at CALS?

One piece comes always to mind. I have it on my office wall. Professor Bob Grossfeld once told us this in our human physiology class, PHY503 (a transformational experience on its own): “From humble beginnings, great things can happen — if you have big thoughts and curiosity.”