The final 2020 Essentially CALS highlights the work of Ken Ellzey, College of Agriculture and Life Science video producer during not only the pandemic but his near 35-year career with NC State.

As part of his pandemic contributions, Ellzey has been plugging away at home keeping college video production up and running. Ellzey has coached researchers and Extension contributors on the best practices for recording themselves, and then he edits that footage into a final product. By producing videos for the NC State Extension Homegrown series, Ellzey was instrumental in keeping the series fresh.

When asked about his NC State career, Ellzey said, “I must say most of my career has been involved with making videos for the Extension service, rather than academics or research. And everyone, everywhere, who I have worked with within Extension have been the nicest people, bar none.”

Ellzey’s career impacted many people who wanted to share a memory or two of working with him and send him their wishes for retirement (even this small sampling of people equals more than 175 years of working with Ken).

My favorite memory of Ken is not a single memory but rather the knowledge of the impact he’s made over many years in CALS Comm, for the college, the university and the people it serves. Not only is Ken a highly talented and skilled video and audio expert, his ability to put people at ease and to help them find ways to tell a cohesive, instructive and helpful story, even on the most seemingly complex or obscure topic, are unmatched.

He has been a star in our unit, a true ambassador who embodied the kind of customer service, creativity and professional excellence that we all strived for.

I also enjoyed our occasional excursions out into the countryside, when he would regale me with his knowledge and love of music, his travels and, from time to time, a scandal he’d learned about from trusted confidants — trusted in part because he would never name them.

I think Ken and I have seen a lot over our years in the college, and I couldn’t have asked for a keener colleague. I will miss him (and those bizarre photos he’d share in staff meetings) and wish him all the best in the months and years ahead.

Congratulations on your retirement! Thank you for being such a great leader for our small but mighty team! We had some great times recording “Inside Extension” and those early days of “In the Garden” studio segments. You were an awesome colleague and are an amazing Dad. I feel honored and blessed to have worked with you for 12 years. Happy retirement, my friend! 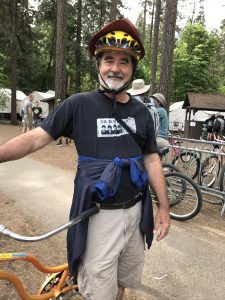 I first met Ken around 40 years ago when he was working in the studio of WCTI-TV New Bern. At that time I was at WNCT-TV Greenville. My favorite times were talking with Ken about the people we crossed paths with in that market. And, our offices were next to each other for the past 10 years.

I worked with Ken for his entire NC State career — 30+ years — as video team leader, department head and Homegrown producer. I’ll always remember Ken as someone who is reliable, steady, excellent videographer with a quirky Wake Forest University sense of humor. Never down — always trying to find ways to improve the video product: qualities that are unique in this business. He’ll certainly be missed at the university!

I arrived at NC State in 2003, grateful to have been given an opportunity to escape newspaper photography but nervous about how this “blue school” humanities grad would fit into a CALS communications department focused on science and agriculture. Ken was my bridge between the two, always present at events I covered in the early days, helping me understand that the great thing about Cooperative Extension is that its people help the uninitiated masses (me!) understand the science. Ken and I covered many extension conferences and 4-H State Congress meetings at the McKimmon Center together from early in the morning until late at night, as well as countless events at the (not until much more recently renovated) University Club.

I have fond memories of coordinating Produce Lady photo/video shoots together, as well as receiving interesting photo requests from Ken (most notably: “Do you have any good photos of food mold?”). And I will always be grateful to Ken for taking over administration of the annual 4-H Photography Contest, a project near-and-dear to my heart but an incredibly time-consuming endeavor. Many thanks to Ken for being such a great colleague and friend all these years, and best wishes for a happy, fulfilling, relaxing retirement!

Crazy that Ken is retiring — he’s an institution for sure!

I have super fond memories of traveling with Ken to the North Carolina Research Campus in Kannapolis. We’d go and shoot stuff at the Plants for Human Health institute. We’d typically go for an entire day (once we stayed overnight in Charlotte for a multi-day shoot). It was an immensely fun road trip. We both enjoyed getting out on the road and talking about our families and office banter all the while searching for good food and milk shakes.

The trips soon turned into quests to find tasty milkshakes while making tasty visuals at the research stations all around the Piedmont. It was never about eating healthy while out on the road, too. We left a trail of empty plates from Gary’s BBQ in Kannapolis to some dirty BBQ shacks in Salisbury. Likewise, I believe we left a string of empty Chick-fil-A milkshake cups (figuratively) all along I-40. It was fun to get out in the state and collect visuals in the central part of the state.

My favorite moment or memory with Ken was a trip that he and I took down to River Landing to prepare for a video interview Dean Linton conducted with Wendell Murphy and Bill Prestage. He had recently gotten back from his family trip to Nova Scotia and seeing him light up about his time with family and love of his family was touching and inspiring.

I’ve had the privilege and opportunity to work with Ken for close to 10+ years. As the tree fruit Extension specialist, we have developed videos on peaches, apples and pecans. We have a set of three peach pruning videos that have close to 1 million hits. Ken has traveled with me across the state to film these videos. Ken is an exceptional videographer as well as a producer of the finished product and very pleasant to work with. He is able to take my bumbling and stuttering clips and edit them together into very nice and professional videos. I, and Extension, will surely miss his excellent skills and great personality and I wish him the best in his well earned retirement!

There isn’t a single standout memory of Ken from my time with him, and there are so many that could qualify. What I’ll say is I’ll miss the drives to shoots to places all across the state talking about just about any topic we could think of. Always good for story or a laugh, Ken is a unique character whom I’ll miss having around, but I wish all the best in his much-deserved retirement. 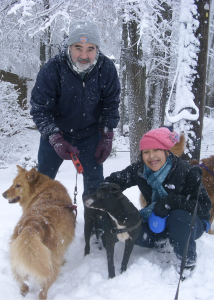 My favorite memory of Ken was when we worked together to create a social media video for the What the Fluff challenge. We had a short but interesting car ride to meet with an animal science professor and her dog, during which Ken had a lot of comments to say about my driving skills. He told me I need to be more aggressive when approaching roundabouts and just go instead of being so cautious and waiting too long. He also lamented the fact that I didn’t know how to parallel park close to the building and made him walk just a little farther to get to the professor’s office because his equipment was so heavy.

Then when we got to the video shoot, the professor’s dog didn’t react the way we wanted it to. For the What the Fluff challenge that we were trying to record, the dog owner was supposed to raise and lower this huge towel that I brought in front of her face to make it seem like she had disappeared. Her dog didn’t freak out like we were hoping it would, so in the editing process Ken wanted to add some fake barking noises to make it seem more dramatic. I told him that was fake news.

I’ve worked with Ken for about a decade, when he took over the responsibilities of taping my daily radio programs, which I have done for over 40 years. Ken has always been dedicated to professionalism in his job, seeking to make the programs of the highest in quality. There are around 40 radio stations in the state who use the programs regularly.

Ken is not a talker, but we have developed a friendship over time that has allowed me to see the “real Ken.” In chatting before the tapings, I learned Ken was a camping enthusiast and worked with the Boy Scouts on weekend trips. We would normally tape on Monday, and often Ken would regale us (the “us” being my wife, Mary — who is my co-host — and me) with his accounts of weekend scouting camping trips. While clearly he enjoyed helping the scouts, he wasn’t shy in often telling us about the downsides of camping — bugs, heat in the summer and cold in the winter, sometimes getting lost, and occasionally being wistful about staying in a Holiday Inn. Mary and I, who are huge fans of “hotel vacations,” would smile and nod in agreement. Still, we were sure Ken was a great role model for the scouts.

When I first went to work for CALS Communications, Ken and the video staff were in Polk Hall, while the rest of us were in Ricks Hall, so I only saw him during staff events. In 1998, when we moved to the Butler Communications Building, Ken got the biggest, most impressive office in the building – windows ceiling to floor! Ken always hated getting rid of stuff, so his office was filled with old cameras and other audio/visual equipment. It was like a museum! He even saved a few larger pieces for the building’s lobby.

I also enjoyed Ken’s children coming to holiday events in the building. They are grown now, but they were such cute kids. The stories of their adoptions are amazing and show Ken’s commitment to his family. 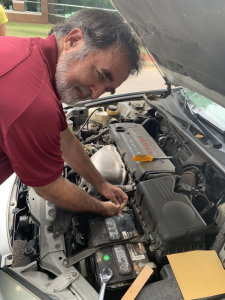 Early on I realized that Ken is a special person, someone who is interesting, helpful and kind. He and I clicked quickly and talked about a whole range of topics — books, music, families, kids, traveling, gardening and politics. Ken is an excellent sounding board and the best road-trip companion. He also knows enough about cars that he has been called in for a consult when something goes awry with my old Toyota (and I have a picture to prove it!). Professionally, Ken is always on time and prepared, and his calm presence puts the video subject at ease. Thanks, Ken, for all the joshing, letting me into Butler and in-general for being an awesome co-worker. I will miss you. Hope to see you and the family around Durham!

Thank you for all you do for everyone at CALS.

Have a coworker who is an essential employee and deserves recognition? Email cals_communications@ncsu.edu.

We have received many comments regarding the recently completed dean search. As you know, the provost has decided to keep looking and will restart the search process.

The Southern IPM Center is pleased to release the Calls for Nomination for our annual Friends of IPM Award program and the IPM Ambassador Travel Grants.