A GRIP4PSI Project to Cut Energy Use, Protect Water and Help Farmers

Producing nitrogen fertilizer consumes about 1% of the world’s whole energy budget, as well as a significant amount of natural gas. Transporting that fertilizer from the factory to the farm requires additional energy. And while farmers apply fertilizer to their fields to ensure crops receive the nutrients they need, typically some areas get more fertilizer than necessary, leading to runoff that can contaminate water supplies.

But that could change — and soon. An interdisciplinary team of researchers at NC State is setting out on an ambitious three-year project to tackle all of those problems, and more.

The team is led by Katharina Stapelmann, a researcher in NC State’s Department of Nuclear Engineering. The team’s goal is to completely rethink how nitrogen-based fertilizers are produced and used. Their approach has two parts. First, the team is testing several methods of on-farm fertilizer production. And second, researchers are developing an on-demand, precision “fertigation” system. Fertigation is the process of delivering fertilizer in the water used for irrigation.

“Fertilizer production is one of the biggest power consumers worldwide,” Stapelmann said. “Our fertilizer production system won’t be energy-free; we’ll need energy too. But our system will add the fertilizer during irrigating, only when the plants need the nitrogen, so there will be much less waste and less run-off. Because the crops will get the perfect amount of fertilizer and water, we expect the system will also increase yields.” 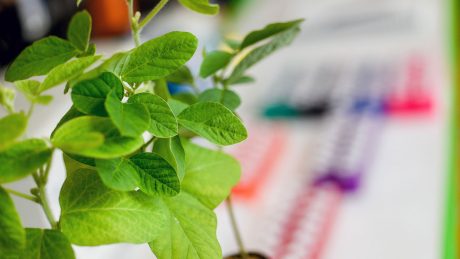 Initial estimates show the system would likely pay for itself in a year or two, because farmers will have to buy less fertilizer and will have increased crop yields, Stapelmann added. The cost of fertilizer can fluctuate significantly due to supply and demand, just like crude oil, and the precision fertigation system will reduce that uncertainty.

The project is one of four interdisciplinary GRIP4PSI projects selected by NC State’s Office of Research and Innovation to receive seed funding to address the global challenges facing agriculture identified by the North Carolina Plant Sciences Initiative (N.C. PSI).

Rethinking the Foundations of Fertilizer

To produce fertilizer, the team is focused on harnessing bacteria that can convert nitrogen in the air into ammonium, a form of nitrogen plants can easily use. NC State researchers Doug Call and Amy Grunden will be leading this part of the project. By providing a specific type of bacteria with a little bit of electricity in a battery-like system, Call and Grunden’s team has shown they can increase the amount of ammonium the bacteria produce. The team is working to optimize both the strain of bacteria and the battery-like unit used to increase ammonium production.

A separate part of the project is looking at treating water with plasma, a type of ionized gas commonly seen in neon lights and lightning. This process produces nitrates and nitrites, which plants can use to fuel their growth. Stapelmann’s team will treat water with two different sources of plasma to determine the impact of the treated water on plants and their helpful microbes.

The next step is for the research team to incorporate both the ammonium produced by bacteria and the plasma-treated water into a full fertigation system. Initial experiments will test this novel fertigation system on Arabidopsis, a small plant that scientists often use to advance our understanding of plant biology. Then researchers will move on to greenhouse-grown tomatoes and lettuce, before eventually testing the new technology on corn and soybeans at the Lake Wheeler Road Field Lab. 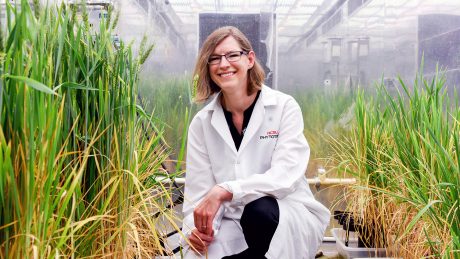 “I hope that in three years we can scale these two technologies up and show that they are comparable to, or better than, conventional fertilizer production,” said Grunden.

“Secondly, we want to understand how the crops respond to fertigation, both at the level of growth and production as well as the plant and microbe interactions that can impact growth, productivity and safety.”

The third part the project will be to develop and test sensors for monitoring the water and nitrogen content of the soil. Chadi Sayde, a researcher of biological and agricultural engineering, will lead this part of the project. Sayde has fiber optic-based soil sensors that can measure moisture levels every four or five inches for up to six miles. Sayde will develop similar fiber optic-based soil sensors to detect nitrates and ammonium, and work to adapt both sensors into a user-friendly system.

Ultimately, the team will engineer an overarching system that will combine the data from the soil sensors and the fertilizer produced by the fertigation system to precisely apply fertilizer and water where it is needed, a process called precision fertigation. To ensure the viability of their system, the team will also test the safety and quality of food produced by plants fertigated by the system as well as the system’s economic feasibility.

Stapelmann’s team is comprised of 12 faculty members from three colleges including the College of Engineering, College of Agriculture and Life Sciences and College of Natural Resources.

The concept for the precision fertigation system began almost three years ago when Stapelmann and Sayde met at new faculty orientation.

“Sayde was talking about the moisture sensors he was developing,” Stapelmann said. “I was setting up a plasma device for water treatment, which can produce fertilizer. We just started talking about fertigation on demand.”

About 18 months later the Plant Sciences Initiative hosted a networking session where more than 100 faculty from across the university briefly described their current research and research aspirations.

It was here that Stapelmann and Sayde met Marcela Rojas-Pierce, a researcher in the Department of Plant and Microbial Biology who is leading the initial fertigation tests on Arabidopsis plants. Sayde had already met Grunden, and the team just grew from there as they identified research gaps and recruited experts from across campus to meet those needs, Stapelmann said. “What started as two people is now a 12-investigator project!”

The 12 faculty members will co-mentor four graduate students. Nine departments involved in the project are providing additional support for the tuition and benefits of the students.

The team also plans to introduce high school students from underrepresented and underserved groups to the new technologies and systems involved in on-demand, precision fertigation through the Creating Awareness of Agriculture and Life Sciences Disciplines, Degree Programs and Discoveries (CAALS 3-D) Program and the Young Investigators’ Summer Program in Nuclear Engineering, Stapelmann said.

“I never do anything alone myself in my lab; my research is always interdisciplinary,” Stapelmann added. “I really like it and enjoy it. You broaden your horizons so much and you get so many new and fresh ideas. You can use plasma for so many things, but I don’t know anything about plants. I team up with people who know what they are doing to advance the research and learn more.”

Several major corporations expressed interest in, and support for this project, said Stapelmann. One international fertilizer company in particular sees the potential for partnership.

Stapelmann hopes that the results produced by the GRIP4PSI seed-funding will lead to additional funding from federal agencies and major philanthropic foundations.

An NC State team led by Jonathan Schultheis has determined a new curing process that greatly reduces internal necrosis in Covington sweetpotatoes. This will save N.C. sweetpotato producers millions of dollars in crop loss.

Bonanno discusses the challenges North Carolina agriculture faces today and how NC State Extension, the organization he leads, works to keep the industry at the forefront of the state’s economy.