William Nordhaus won the Nobel prize in economics this morning for work on the economics of climate change. Back in 1994, he wrote a paper estimating the impact of a changing climate on agricultural land values. A lot of progress has been made in the science of climate and economics since 1994. We discuss the work of Nordhaus in the context of agriculture in North Carolina.

By Dr. Eric Edwards and Dr. Sara Sutherland, ARE

Greenhouse gasses in the atmosphere (like carbon dioxide and methane) act as a one-way blanket. Visible sunlight passes through them and is absorbed by the planet, heating it. The planet in turn emits infrared radiation (heat) back into space. However, greenhouse gasses do not allow all the radiation to escape, instead reflecting it back to earth and heating the planet. This process is similar to what takes place in a plant greenhouse, and is generally beneficial, allowing life on earth to exist by keeping some of the sun’s energy trapped near the earth’s surface. However, more greenhouse gasses mean more energy; levels are high today, and increasing as a result of the burning of fossil fuels. Because of this, more energy is building up in the earth’s climate system, and the effect of this process has been termed climate change. Climate scientists try to model how the increased energy will affect patterns of rainfall and precipitation around the world, both now and under future conditions as greenhouse gas levels continue to rise. 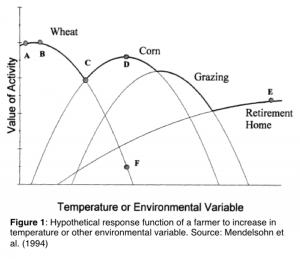 Determining how a changing climate affects agriculture brings us to the 1994 paper entitled “The Impact of Global Warming on Agriculture: A Ricardian Analysis,” by noble laureate William Nordhaus and co-authors Robert Mendelsohn and Daigee Shaw. Because plants grow at different rates depending on physical conditions, changes in temperature and precipitation affect agricultural production. One method of estimating the impact of climate change on agriculture is through examining the effect of these changes on crop yields. However, farmers are not naïve and will switch out of crops that are not suitable for the changed climate. An illustration of this is shown in Figure 1, where the value of production is plotted against a temperature or other environmental variable. In this example, as temperature rises a farmer produces wheat until reaching point c. Here, a naïve farmer would continue to produce wheat even though the value of doing so is decreasing rapidly. A farmer interested in maximizing the value of production begins producing corn at point c, and continues to do so until the temperature becomes high enough to make grazing the most productive use of the land. In extreme heat (think Arizona), the value of agriculture may decrease so much that the farmer chooses to convert the land out of agriculture entirely (in this case, into a retirement home).

The Mendelsohn, Nordhaus and Shaw Estimates

To estimate farmer response to changing climate, the paper uses all the agricultural land in the United States to estimate the effect of precipitation and temperature on land value. Then, the paper projects a 5 degree Fahrenheit increase in temperature and an 8% increase in precipitation onto the current (at the time) mean values for US counties. The new precipitation and temperature averages are used to estimate agricultural land value change. Estimates from the paper are shown in Figure 2. The paper uses two different land value weighting schemes, leading to significantly different estimates for North Carolina. While these results are 24 years old, they are a good starting point for understanding the impact of climate change on agriculture. A changing climate affects growing conditions and because farmers adapt, economists look beyond what farmers are currently doing to what they will do in the future.

More recent estimates suggest that expected temperature and precipitation changes in North Carolina will reduce agricultural productivity. In 2007, Olivier Deschênes and Michael Greenstone proposed a slightly different method for estimating the economic impact of climate change on agriculture. Rather than rely on estimates made by comparing counties to each other, they utilize the variable weather within counties to determine whether each county’s agricultural production increases or decreases in hot, wet years. They then take these estimates and apply them to projections of temperature and precipitation changes under climate change. These estimates suggest North Carolina will see a decrease of $650 million (2002$) in annual agricultural profits. This is a startling estimate, suggesting a 46% decrease in agricultural profits. Under these estimates, North Carolina is one of the four hardest hit states in terms of total loss and percentage loss. Of course, studies like these come with high levels of uncertainty, but are suggestive that the impact of climate change on agriculture in North Carolina will be significant.

The Role of Water

One potential issue with estimates of the sort provided by Deschênes and Greenstone is that year-to-year fluctuations may result in large short-term losses for agricultural producers, while long-term climate changes can be prepared for, and losses decreased through mitigation investments. For example, Figure 3 shows the trend of decreasing summer precipitation throughout the southwest US next to a plot of the rate of irrigation in North Carolina. While decreasing summer precipitation can stress crops and reduce yields, investment in irrigation systems allow farmers to reduce the impact of dry weather. In general, a farmer is not going to install an irrigation system because a particular year is especially dry. However, if dry years become more common, more investment in irrigation is likely to take place. While North Carolina still has relatively low levels of irrigation compared to more arid regions, the upward trend suggests expenditures will continue as farmers respond to a changing climate.

Water plays a key role in climate change adaptation. In addition to providing a buffer to drought, water can be used to cool high-value crops and livestock. Further, the management of water is key to mitigating the effects of extreme weather events.

Some of the most important effects of climate change are likely to be caused by extreme weather events like droughts and hurricanes, which are expected to adversely impact North Carolina’s agriculture industry. These loses are generally not accounted for the in approaches already discussed because most climate models look at broad trends of average precipitation and temperature. Understanding these processes first requires knowledge of the effect of climate change on climatic variability, and then translating that into understanding impact on agricultural production. For instance, more frequent heat waves decrease meat and milk production in livestock. If heat waves become more likely in North Carolina, as is projected, agricultural producers will need to invest in modifications to management practices and housing.

Perhaps the most important extreme weather events in North Carolina are hurricanes, which are projected to increase in frequency and intensity under climate change. Hurricane Florence offers a clear illustration of these costs. Initial agricultural loss estimates are estimated to be over $1.1 billion. Row crops, forestry, vegetable and horticulture crops, livestock, and aquaculture all experienced losses. Hurricanes can be especially dangerous for livestock, with 4.1 million poultry birds and 5,500 swine lost to Hurricane Florence. Hurricanes are destructive to crops through high winds and heavy rains. Corn and tobacco may be directly damaged by wind gusts, while crops exposed to flood water are considered adulterated by the U.S. Food and Drug Administration and might not be eligible to be sold for human food. The timing of hurricane season in North Carolina contributes to severe losses when hurricanes hit, like Florence, at harvest time.