“He’s a lifelong learner,” Bob Usry said. And that says a lot about Donny Lassiter.

Bob Usry knew Donny Lassiter as a student in the Agricultural Business Management (ABM) program at NC State. Lassiter made an impression on his professors not only in class but as part of the 1999 National Agricultural Marketing Association (NAMA). His team’s project was to invest in an echinacea and ginger operation to respond to consumers’ interest in natural remedies. When a judge asked the team how they were going to protect their investment, Lassiter answered with “guns and dogs.” That made an impression too and the team took home first place.

Lassiter grew up in northeastern NC on his family’s farm. He loved it. Working on the farm with his dad, grandad and brothers, Donny learned a lot about agriculture, and the role NC State plays in supporting the industry. He described seeing firsthand the “trust” that farmers had in the NC State Cooperative Extension. The early introduction to Extension, and being an NC State fan, made attending the university a goal of Lassiter’s. 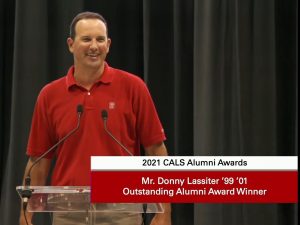 Donny Lassiter “went to NC State with a lot of questions,” Lassiter recently explained at the 2021 College of Agricultural and Life Sciences Alumni Awards. He enrolled in the Agricultural Business Management program to find answers. He said, “The curriculum was very applied and for a farm kid with plans of going back to the farm, it was something I could put right into practice.”

After Lassiter graduated and returned to Lassiter Farms, the farm grew from about 2,000 acres to 10,000 acres. He also honed his entrepreneurial skills by developing a new enterprise: Chufa. Chufa, used to attract turkeys during hunting season, is a little-known crop yet Lassiter developed a very successful business. Lassiter’s inquisitive mind, combined with the business skills he learned in the ABM program, led him to assess the risk, create a new business model and launch it effectively.

In 2020, Donny Lassiter decided he still had more to learn and once again chose NC State. This time, Donny Lassiter, and his brother Mark, attended the Executive Farm Management program.  This program is led by NC State Cooperative Extension and helps large growers further refine their business management skills. About the program, Lassiter said, “I’ve always felt like you need to kind of get outside of your box to learn” and EFM provided just that. The program spanned across a 6-week period and met in Georgia, North Carolina and South Carolina during January and February 2020.

Lassiter received the award for Outstanding Alumni for the Department of Agricultural and Resource Economics (ARE) on stage with Dean Richard Linton on September 18th, 2021. He was joined by his wife, Jamie, and their two sons, Carter and Wallace.

Lassiter has been asking questions, finding answers and repeating the process as his knowledge grows. He advises current NC State students to do the same. “Don’t stop asking questions,” Lassiter recommends. He also encourages students to develop networks and take advantage of professional development opportunities offered by the ABM team. He has also opened his farm to class tours so that students can see first-hand how he has achieved success.

Throughout Donny Lassiter’s life, NC State University has been there to support his vision for his family farm. The ARE department’s academic and Extension programs also assisted Lassiter on his quest for answers. Donny Lassiter epitomizes what it means to be a “lifelong learner” and NC State stands ready to assist him in his future ventures.

You Decide: Do We Live in the Most Uncertain of Times?

The year 2022 has already contained numerous events that directly impacted our society. What are they and what impacts are they having?

The National Bureau of Economic Research recently published a study on how individual states have dealt with the challenges of the pandemic. How did North Carolina measure up to the others?