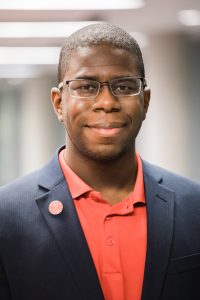 Taleek Harlee, a senior majoring in Agricultural Education, has been awarded the Mathews Medal, one of the most prestigious awards at NC State University. The Mathews Medal honors graduating seniors who have made significant contributions to North Carolina State University during their tenure as undergraduate students. Modeled after the Watauga Medal, the Mathews Medal is the highest non-academic distinction awarded to students who serve their University. The Mathews Medal was created and is administered by the Alumni Association Student Ambassador Program. The award is named for Walter J. Mathews, the first student enrolled at the North Carolina College of Agriculture and Mechanic Arts in 1889. It recognizes seniors who have built a campus legacy based on leadership and service to their alma mater. Walter Mathews continued his involvement with the University as an active alumnus, and this award encourages the student leader recipients to envision themselves as alumni leaders of the future. 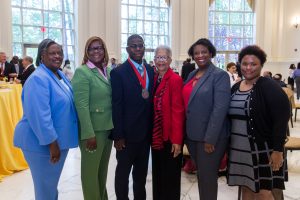 Four students, including Harlee, were selected by a committee consisting of university administrators, faculty, staff, and Alumni Association Student Ambassadors. Dr. Travis Park, director of the AHS undergraduate programs and Harlee’s advisor, states that “Taleek Harlee is one of our most genuine, passionate future teachers of agriculture. He brings life to his courses and excites his classmates about agriculture and agricultural education. Taleek is a natural leader whose impact has been felt on campus, across the nation, and even in his own student teaching classroom. We are thrilled that Taleek was chosen as one of the Mathews Medal Award recipients for NC State.”

Harlee was very grateful to receive this honor, saying “Receiving this award has meant a great deal to me, and is something that I have not taken lightly, It’s very humbling having this honor bestowed upon myself, my heart will forever hold NC State”. Congratulations on this award Taleek and your future success.

Get the NC State Guides app and mark your calendars for these fun activities to start the new school year.

Through extensive conversations with the College of Agriculture and Life Sciences nomination committee, as well as internal and external stakeholders, it has been determined that the search for the college’s next dean will be relaunched this fall.